Young Jews in Germany have fun with ‘reimagined’ learning and discussions 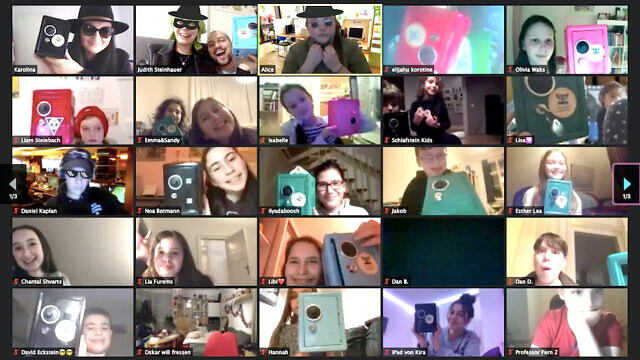 Central Welfare Board for Jews in Germany designed send-home kits so young people could take part in workshops and discussions.

More than 1,500 young Jews in Germany took part in a series of “reimagined” camps and seminars last week as the fun of learning and creating got under way at home.

The Central Welfare Board for Jews in Germany (ZWST) designed and produced send-home kits so the children and teenagers aged eight to 18 could take part in workshops and age-based discussions around Jewish identity, values and tradition.

Moving online presented challenges akin to those experienced by other Jewish organisations around the world, challenges that led to a large degree of idea-sharing across national boundaries.

In addition, there were opportunities to take part in traditional prayers, learn how to upcycle and bake, plus plenty of keep fit sessions including yoga and workouts with professional trainers, with parents encouraged to get involved too.

“The programme offered a virtual mingling and discussion space where children and young adults were able to open up to their peers and counsellors about the real-life challenges as a result social distancing and isolation,” said organisers. “At this moment in time, that was of particular value.”

The ZWST programme was run in partnership with the Stiftung Deutsches Hilfswerk and Genesis Philanthropy Group.

In the UK, Jewish youth organisation JLGB’s new platform prompted by the pandemic was recently announced as a finalist in the Children & Young People Now Award.

JLGB Virtual, sponsored by Jewish News and with GPG support, had brought 80 online shows to an audience of 1.8 million viewers by the end of last year.