We are from the garden 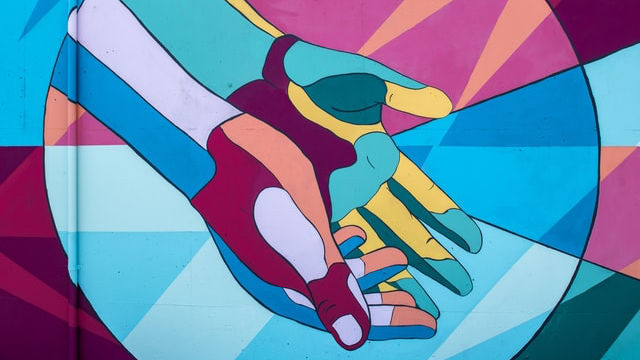 Russian-speaking Jews have yet to find their place in the American Jewish community but don't give up on them -- we need each other.

The slightest accent of a technician at my recent routine medical procedure prompted me to ask her “Where are you from?” We ended up talking about our children and their life choices, our own life choices, and decisions we made many decades ago to move half the way across the globe and so much more. It happened that we were from the same faraway part of the world that helped us to make an immediate connection, to feel a “click” of having so much in common, so much to share, to kvell and kvetch about. But I also believe it is the incredible power of this simple question, “Where are you from?” that opened possibilities for deep, meaningful conversation beyond standard small talk between two strangers.

If you have an accent like I do, you are being asked this question quite often. And even if you don’t, the answer is complicated. Do you name the place you were born, grew up in, live now? Is this the place where your family is from and if so, how far back are you willing to go? What are we trying to learn about a person with this ordinary question?

I would argue, though, it’s not an ordinary question at all, if we are ready to open up, to talk and to listen. Jewish geography is loaded with meaning and nuance. Our answers are filled with stories and journeys that speak to who we are and how we ended up in the place we call our home today. Our geography reflects the history of our family as part of the shared destiny of our people.

“Russian-speaking Jews” is a mouthful of a term. And yet, every word here is crucial as it represents a certain aspect of our complex identity. Our children today often speak Russian with a detectible American accent, and they cannot read Dostoevsky or Tolstoy in the original. Yet, they recognize old Russian cartoon characters, sing along to popular Russian songs, and have childhood memories of weird foods their grandmothers fed them with pride. Russian-speaking Jews gravitate to each other in their social circles and feel much more comfortable in Jewish experiences together.

No one is entirely sure how many Russian-speaking Jews there are in the United States today. The answer fluctuates from as high as 750,000 people to fewer than 500,000, depending on which expert’s opinion you trust, about 10% of the American Jewish population. Demographers and sociologists are largely in agreement on the number of people from the former Soviet Union – about 700,000 – who immigrated to America in the last great wave, between 1971 and 2009. They also agree that about half of that population lives in New York City, with other large communities in Boston, Chicago, San Francisco, and South Florida.

But whichever number you take as a threshold in this matter, the takeaway is obvious: With the decline of Jewish engagement across the board, such a sizable subgroup of the American Jewish community cannot be overlooked.

There is no doubt, RSJs today are Americans. The big question is: Are they, will they be counted as American Jews? And not just in the matter of statistics, but in terms of Jewish engagement, Jewish loyalties, and a sustainable Jewish future.

There is a bitter aftertaste, “mutually broken expectations” Sam Kliger calls them (from his perch as sociologist and Director of Russian and Eurasian affairs for the American Jewish Committee), on both sides, stemming from first encounters with each other. American Jews might say “We fought for them, we welcomed them with open arms and hearts, and where are they?” and rightly so.

On the other hand, new immigrants from the former Soviet Union were focused on making a home in a new land, learning the language, determining their children’s education, entering the American workforce. They were starting from an altogether blank page. Every step was a challenge: from opening a bank account to paying bills and filling out volumes of paperwork. As you can imagine, Jewish engagement was not a high priority on their agenda. They did not feel comfortable in the local synagogues or JCCs, not only because they did not know enough English but because they did not speak enough Jewish!

It is probably fair to say that not enough has been done by either party to facilitate RSJ integration into American Jewish life. And to this day, Russian-speaking Jews are not joining synagogues in large numbers, not enrolling their children in Jewish day schools or summer camps, and do not actively participate in Jewish life in any of the conventional ways.

This is the moment in time to recognize and acknowledge the importance of engaging this demographic, of creating powerful points of entry to Jewish life and learning for the Russian-speaking Jews. This is the time to inspire and empower educators and community organizers to create transformative Jewish experiences for various RSJ target audiences and create multiple pathways for RSJ professionals and lay leaders to learn and experiment. And furthermore, this undertaking is no longer about helping Russian-speaking Jews, but rather an investment in the sustainability of Jewish community.

We cannot and should not wait for Russian-speaking Jews to “come to us.” We need to be proactive with creative targeted marketing, outreach, and programming, all suited to an RSJ audience, that reflect their unique and blended culture.

The RSJs have so much to learn from you. Not being part of a post-Soviet vocabulary or mindset, philanthropy does not come easy and requires education, patience, and lots of leading by example. Traditional ways of Jewish practice and religious expression of one’s Jewish identity often feel alien, unnatural. Belonging to a Jewish institution raises suspicion and poses psychological barriers.

When you marched in Washington DC on December 6, 1987 and protested with signs “Let my people go!” when you kept an empty Russian chair at your Passover table for us, you treated us like one of your own, your family members who needed help. When new immigrants were arriving to the US, you opened your homes, your synagogues, your hearts to share. From those experiences, we should learn how to take responsibility for the most vulnerable among us and how to see ourselves as part of a Jewish collective. As brand-new immigrants, we may have not been able to internalize these lessons. We are now.

And there is plenty to learn from RSJs as we have developed a unique blended identity. Strong bonds to the State of Israel and lower than average intermarriage rates are defining characteristics of the RSJ community of today. We show incredible resilience, an ability to sustain identity despite danger and the lack of freedom to do so. Creativity and courage to explore alternative ways of expressing Jewishness have resulted in a plethora of RSJ grassroots initiatives across North America and around the world. These initiatives can serve as inspiration for rejuvenating meaningful Jewish engagement across the board, in and beyond the RSJ community.

We, all of us, are from the same garden, the same dream of a strong Jewish community of tomorrow. We need each other to connect the dots in this journey; we can do it “marching hand in hand.”

Thank you, Dan Nichols & Eighteen, for the inspiration!

ABOUT THE AUTHOR: Olga Markus grew up in Kiev, Ukraine and has dedicated her professional life to Jewish non-profit world. She holds an MA in Russian Language and Literature and an MA in Religious Education. She served as Senior Educator of West London Synagogue of British Jews, coordinated educational programming for the World Union for Progressive Judaism in Russia, served as Educator-in-residence at Washington Hebrew Congregation, and worked as an Assistant Executive Director at COJECO. Olga Markus works as the Program Director, Jewish Education and Engagement at the JFNA, helping to strengthen Jewish identity of Russian-speaking Jews and to provide meaningful and innovative opportunities for Jewish engagement to RSJ communities in North America.