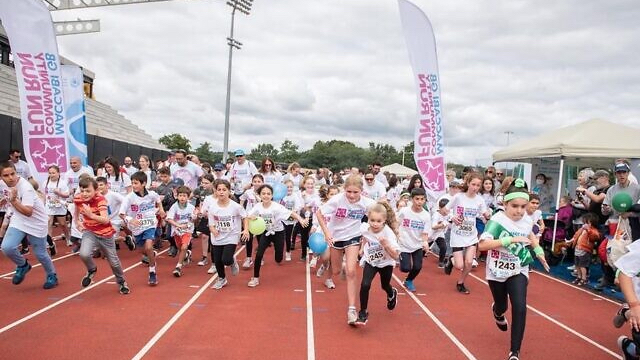 Thousands turned out to the annual Maccabi Fun Run on Sunday, to raise money for 76 communal charities.

Runners took part in either the 10km, 5km, 5km walk, 1km or the Tri-Run which combines all three distances, with figures such as the Chief Rabbi, Ephraim Mirvis, helping to start the runs.

Spectators and runners alike took part in activities such as mini golf and slime-making throughout the day, with the whole event live-streamed.

Among the charities who had runners fundraising was Chai Cancer Care, with more than 70 runners raising £3,700.

Among those taking part was Zoe Ingram, who ran 1k with her daughters, Maya, 7, and Eden, 5. She decided to support the charity as her late husband, Marc, sadly passed away from lung cancer last month.

Meanwhile the Feldman family also took part in the 5k colour run with mum Nicole explaining that she was supported by the charity after being diagnosed with Stage 4 Hodgkins Lymphoma.

Around 20 runners turned out on the day to support Kisharon, a communal learning disabilities charity. Kisharon’s Chief Executive Richard Franklin said, “It was amazing to witness the wonderful atmosphere created at the community Fun Run today.

“Thank you to all our amazing runners who raised important funds that will make a great difference.”

“This annual fixture in the communal calendar is such a positive and inspiring occasion, giving participants of all ages the opportunity to unite around one common goal – giving back to the community,” she said.

David Pinnick, Chairman of Maccabi GB added, “It was incredible to see the community return en masse to an actual live event, the first and largest of its kind since the pandemic.”