This unique Hanukkah program celebrates a world of Jewish miracles 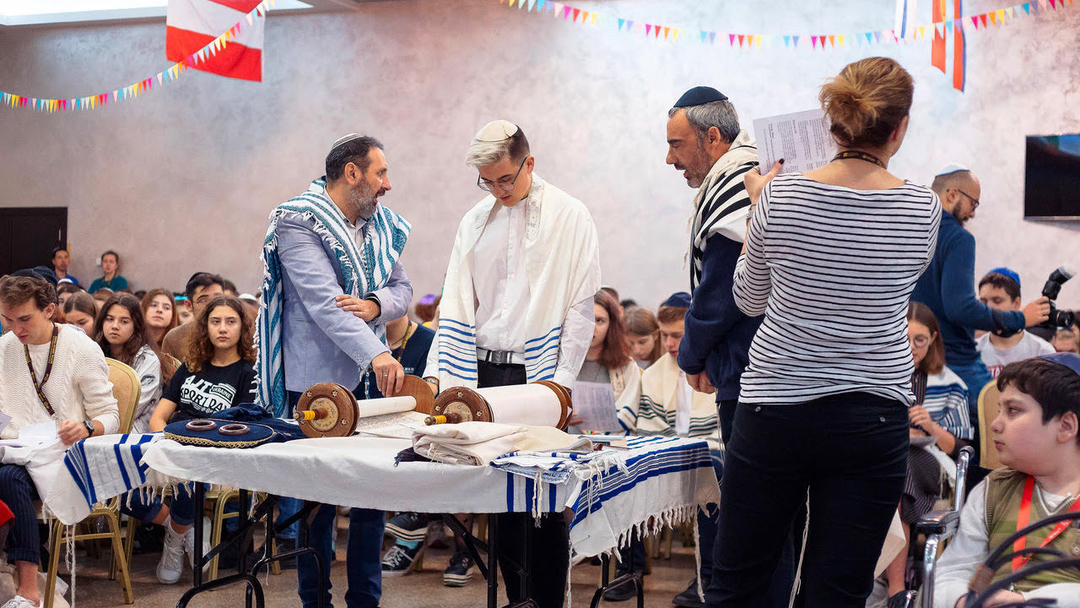 Ten years ago, Illya Buzunov never could have imagined that one day he’d be teaching Jews around the world how to prepare potato latkes.

Until 2014, the Ukraine native didn’t even know he was Jewish.

But that’s exactly what Buzunov, 24, will be doing on November 30 — the third night of Hanukkah — as part of a new video event series that brings together Jews from a variety of countries for Hanukkah candle lighting celebrations and an inside look at their communities. Each night, Jews from a different location around the globe will light candles as a part of the series, which highlights an aspect of local Jewish music, dance or cuisine, as well as the location’s Jewish history.

The global Chanukah campaign is part of an effort by the American Jewish Joint Distribution Committee, the massive global Jewish humanitarian organization known as JDC, to highlight Jewish communities worldwide.

“I’ll demonstrate how to make latkes using a traditional recipe of potatoes, eggs, salt, baking powder and oil,” said Buzunov, who coordinates Active Jewish Teens, JDC’s teen network across the former Soviet Union, at the JDC-sponsored Halom Jewish community center in Kyiv, Ukraine. The network is organized in partnership with Genesis Philanthropy Group and is part of the BBYO youth movement. “It’s one of the easiest things you can do for Hanukkah,” he said.

JDC’s Hanukkah series, “A Great Miracle Happened Here,” will be livestreamed each night at 7 p.m. ET on JDC’s event site, chanukah.jdc.org, as well as on its Facebook page. The events kick off Nov. 28 in New York with a segment hosted by author Dara Horn and featuring special guests including Chinese-Jewish celebrity Molly Yeh, who hosts the Food Network’s “Girl Meets Farm” TV show.

Subsequent nights will feature Jewish communities in Morocco, Ukraine, Estonia, the United Arab Emirates, Israel and Poland. The series concludes Dec. 5 with a broadcast from Latin America hosted by Analucia Lopezrevoredo of Jewtina y Co, an organization that seeks to nurture and celebrate Latin-Jewish community, identity, leadership and resiliency.

The aim of this first-of-its-kind project, said Heather Morgan, JDC’s managing director of global marketing and communications, is to use the Jewish holiday to raise awareness of JDC’s own work worldwide — now in its 107th year.

“We’ve been involved in almost every monumental event in modern Jewish history, but there’s a disconnect between the primacy of JDC as an organization and how much people really know about us,” Morgan said. “We thought this would be a great opportunity to raise awareness and visibility by linking ourselves with the Hanukkah narrative, which in so many ways parallels JDC’s own narrative.”

Since its founding in 1914, the organization has provided urgent and non-urgent humanitarian aid to Jews and others in more than 70 countries worldwide, from Argentina to Uzbekistan.

In just this last year, JDC has assisted earthquake victims in Haiti, brought Israeli-made ventilators to hospitals in India overburdened with COVID-19 patients, and provided homecare for more than 80,000 elderly Jews in the former Soviet Union — many of them surviving on pensions as low as $2 per day.

Buzunov said he “became a Jew” totally by surprise. Seven years ago, when he was a teenager and a self-described introvert, Buzunov’s best friend invited him to go roller skating, where they met up with a large group of Jews Buzunov did not know. It was Purim, and the group went around Kyiv giving out hamentashen to poor Jews. By the time they got to the roller-skating venue at the end of the day, Buzunov felt like he’d fallen in love with the Jewish people.

Filled with enthusiasm, Buzunov eagerly shared his feelings with his elderly grandmother.

“She looked at me proudly and told me, ‘We are Jewish,’” Buzunov said, recalling how she revealed that his great-grandparents had been Jews but had kept it secret to avoid suffering discrimination under Soviet rule. “I had no idea. Even my parents had no idea. At that moment, I realized what I had been missing my whole life, and I understood what I wanted to do.”

In November 2019, after years of study and involvement in Jewish communal life, Buzunov formally converted to Judaism, celebrated his bar mitzvah and took the Hebrew name Eliyahu.

From another part of the world, Sarah Tagger, 27, will be showcasing a different Jewish community on night two of the series. A native of Canada who generally lives in California, Tagger will be giving audiences a look at Jewish Morocco, where she is spending a few weeks as part of JDC’s yearlong Ralph I. Goldman Fellowship in Global Jewish Leadership through JDC’s Entwine platform. During the year, Tagger is traveling from place to place helping develop programs to assist far-flung Jewish communities.

So far, Tagger has been to the United Arab Emirates, Bahrain, Armenia, Georgia, Turkey and the Moroccan cities of Casablanca, Tangier and Marrakesh.

“Here in Morocco, JDC supports the local community with everything from elderly welfare to children’s education,” said Tagger, who wrote a master’s thesis on the potential of tourism to mitigate political conflict in the Middle East. “We’ve even helped families who were hit hard by the COVID-19 pandemic with emergency humanitarian assistance.”

Tagger’s next destination is Warsaw.

“All of this makes me so proud, and what better time to reflect on it than Hanukkah — a celebration of coming together, of light, of miracles — and what greater miracle than to be here in Morocco with this incredible community, learning all about its heritage and spending time together.”

“JDC proudly works with Jews in dozens of countries to strengthen Jewish life, engage with Jewish tradition and build Jewish identity,” she said. “By connecting in global celebration, we’ll be inspired by these modern miracles and ensure that the flame of Jewish life continues to burn bright.”