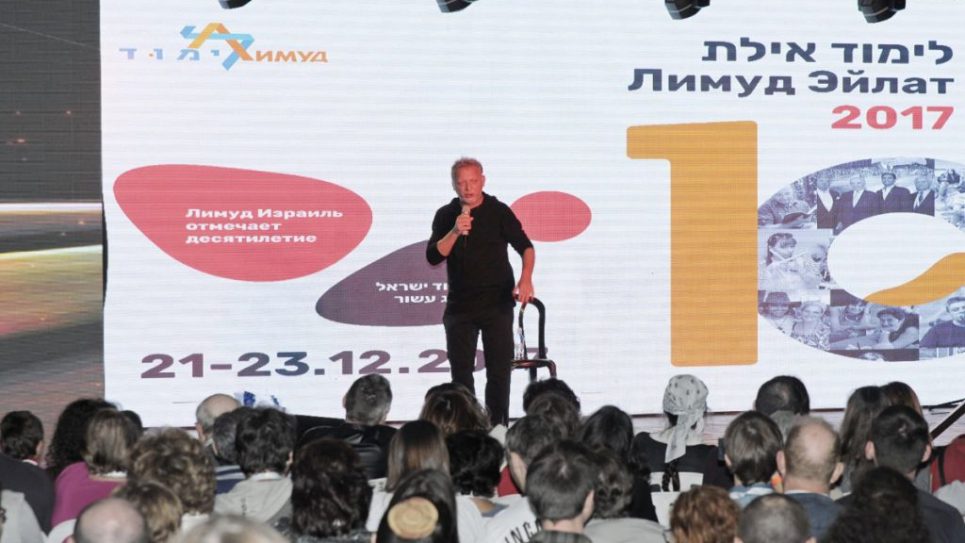 The port city of Odessa on the Black Sea was one of the main cities in which the Jews lived and flourished in the 19th and 20th centuries. It was the spiritual, literary and Zionist inspiration for generations of Jewish writers and thinkers, including Ze’ev Jabotinsky, Chaim Nachman Bialik, Ahad Ha’am and many more.

There was an inevitable comparison this week – not in Odessa and not the Black Sea – but in Eilat on the Red Sea.

Among others was Lieutenant General Benny Gantz, who came to Eilat especially to honour his mentor, Rabbi Menachem Hacohen, and to open a Limmud FSU exhibition on the rabbi and his career.

Hacohen is the 87-year-old “Rabbi of Limmud FSU” and has enjoyed a long career in a variety of positions, including Chief Chaplain in the Israel Navy, rabbi of the moshav movement, member of the Knesset and Chief Rabbi of Romania – and, incidentally, the rabbi who officiated at the barmitzvah and later the wedding of Lieut.Gen. Gantz.

“Over the past decade, we truly have made a huge impact in Russian-Jewish community in Israel, which is one of the biggest communities in the country,” said Limmud FSU founder Chaim Chesler.

“We’re extremely excited to come back once again to Eilat, one of the world’s most beautiful resort cities, to celebrate our 10th anniversary in Israel with 2,000 young participants, our devoted team of talented volunteers, leading Israeli public figures and dozens of well-known lecturers and experts.”

Alexandra, 30, one of the first-time participants at the event, said:

“I was truly amazed by the spirit of volunteerism here.

“There are some wonderful people at this event, who devoted months of their life to make Limmud happen, and they’re always so happy to help and to assist every participant. It shouldn’t be taken for granted”.

During his interview session with Russian-Israeli journalist Lena Lagutina on Friday, he said Israel was not taking sufficient advantage of “the reservoir of potential” offered by olim from the former Soviet Union. “Israel failed to do this in the 1970s, 1980s, and 1990s, and continues to fail at it today,” Singer said.

The World Jewish Congress (WJC)is the leading umbrella organisation of Jewish communities around the world and Singer has worked with it since May 2013.

Prior to joining the WJC, Singer served for 14 years as the director general and CEO of World ORT, one of the world’s largest non-governmental education and training providers.

“We aren’t taking full advantage of this reservoir of capabilities and potential… there is still much work to be done,” Singer said, adding that part of the problem with olim absorption in Israel is that they are not given enough incentive to stay.

“Israel must invest more in education and creating opportunities to keep those who came here en masse and can now find themselves anywhere in the world.”

During the interview, Singer also encouraged olim from the former Soviet Union to increase their participation in political life.

“One of the greatest mistakes made by my generation,” said Singer, who immigrated to Israel from Ukraine in 1972, “is that we didn’t want to influence politics… in retrospect, that wave of immigration brought so many talented people, who were just trying to survive.

“I want to tell them, and you, that your active participation in Israel’s civil and political life is critical.”