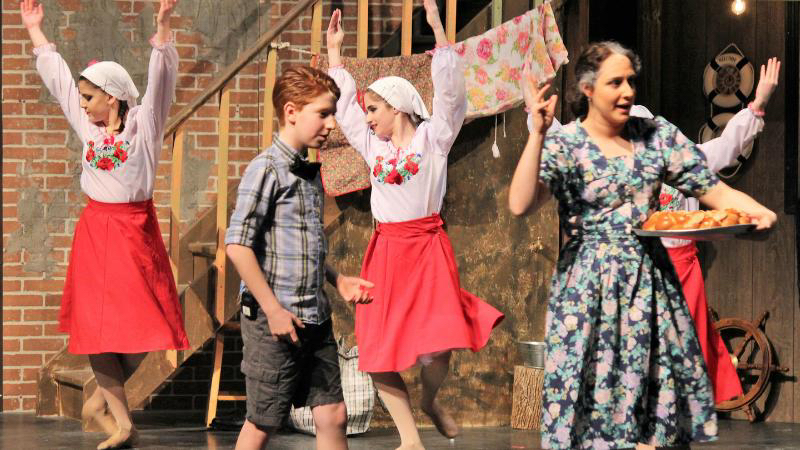 After selling out both shows earlier this year, The Old House returns for a second run.

The Old House takes place in 1970s Odessa, Ukraine, and follows the story of a young man who grows up in a Soviet-style apartment building where he was raised by both his parents, and his neighbours. The entire building sees one another as family.

When the young man falls in love with a young woman, he seeks the approval of the residents of the building.

“I’ve been looking for ways to cling on to my culture,” said Dan Petrenko, writer and director of The Old House and founder of JDY Theatre.

Petrenko’s parents were born and raised in Odessa, and although Petrenko was born in Israel, his parents’ background influenced much of his upbringing.

“I’ve been growing up around this dialect and this kind of humour my whole life and surrounded by Yiddish sayings that my grandmother says and Ukrainian food that my parents cook,” he said. He last visited Odessa as a young child.

To many individuals raised in the Soviet Union, Odessa is known for its multiculturalism. Russian, Ukrainian and Yiddish were often spoken in the city which was home to people from a variety of regions. Petrenko wanted to make sure the unique elements of the city were captured in his play through humour, language, and the culture. While the production is done in English, Petrenko said they worked hard to incorporate the linguistic nuances.

“We tried to show the [true nature of the city],” said Petrenko. “It’s hard to replicate it exactly but we did it with the tone, the humour, and the way we styled the jokes.”

The cast of the play is a mix of Jews and non-Jews, almost all of whom come from immigrant families. But for Petrenko, the most important part is making sure his cast connects to the story.

“There’s love and there’s sacrifice and there’s loss in the play. These values that are eternally relevant,” said Petrenko. “It’s a reason that even though none of our cast members are from Odessa, they were able to find themselves in the characters.”

The JDY Theatre was founded in 2015 when Petrenko was in Grade. 12, with the help of J. Academy directors Dina Dryden and Kate Noam.

It has put six plays on the stage in the last three years and has no plans to stop.

“I believe JDY Theatre has the right potential and the right resources to become Toronto’s Jewish theatre,” said Petrenko. “We’ve proven that this is what people want.”

The JDY Theatre is supported by Genesis Philanthropy Group, UJA Federation of Greater Toronto, and the Schwartz/Reisman Centre.

This Old House will hit the stage Nov. 21 and Nov. 22 at the Richmond Hill Centre for the Performing Arts.