The gloves are off! Dmitriy Salita on Judaism, boxing and Fury vs Joshua 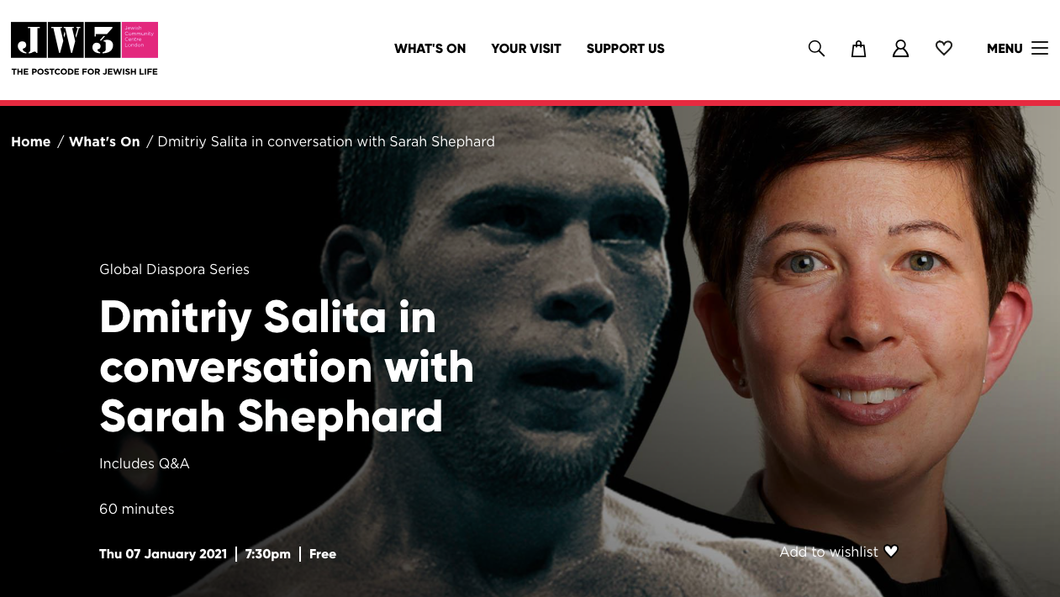 Jewish boxing legend known as the 'Star of David' sat down with Jewish News before he is due to speak at JW3 as part of a series with prominent voices from across the diaspora.

The association between Jews and the sport of boxing is a long and illustrious one, but perhaps there has never been a professional fighter who has displayed his Jewish identity so openly and proudly as Dmitriy Salita.

The former boxer turned promoter, who fought under the moniker Star of David, will be appearing online this Thursday evening in the latest instalment of JW3 and Genesis Philanthropy Group’s Global Diaspora Series – the speaker series which brings prominent Jewish voices from across the global diaspora to a UK audience.Ahead of his appearance, Salita sat down exclusively with the Jewish News to talk boxing and Judaism, reflect on his childhood move from the Soviet Union to the USA and to share his prediction for the much anticipated heavyweight world title super-fight between Anthony Joshua and Tyson Fury.

Salita first came on the radar of British sports fans in 2009, when he fought Amir Khan in Newcastle. During the build up to the fight, Salita’s Jewish identity, and his decision to keep Shabbat before the fight, received a lot of attention. In reality, Salita had been blending a life of boxing and Jewish observance since his teenage years. Salita began boxing at age 13, whilst his journey to becoming more religious started at the age of 14 through Chabad Lubavitch.

On boxing and Judaism
Training at the renowned Starrett City Boxing Club from a young age, Salita’s boxing career was heavily influenced by the gym’s founder, the late Jimmy O’Pharrow. The club was predominantly African American. ““I was an immigrant, a minority within the boxing community, but socio-economically like many of the fighters in the gym. We were all fighting hard to make a better life for ourselves through boxing”, Salita explains.

“I always had a strong sense of Jewish identity and it began to grow through my experiences in Brooklyn, of learning about what it means to be a Jew. As I started to win boxing tournaments as a teenager, my story, background, origin started to get known. I began to stand out, making a name for myself within the boxing community.”

The decision not to box on Shabbat was a major milestone for Salita, which also presented some real challenges. “At the age of 18 I received guidance from Rabbi Zalman Liberow not to box on Shabbos”, Salita recounts.  “After making that decision I competed in one of the most prestigious amateur boxing tournaments, the Under 19 US Nationals.  My fight was originally scheduled for Shabbos.  After my refusal to box on Shabbos and some back and forth with the event organizers, my fight was changed.” The tournament proved to be a turning point in Salita’s career – “I won and became US national champion, just 9 years after arriving to the US. That was a career and personal breakthrough moment which introduced me to the boxing world in a significant way.  Shortly after that win I started getting regular calls from Don King and Bob Arum, who wound up being my first boxing promoter”.

Despite the demands of training, Salita managed to make time for religious learning. ““What I learned, from Chabad Chasidic philosophy particularly, inspired me to be the best I can be, to use my talents and time in the spotlight to serve my community.   Even though I was not a Yeshiva boy and did not come from a traditional Orthodox background, I knew that I had a mission and was inspired to use my ability to do my part and use my talents however unusual to serve my community.”

Facing up to challenges
Talking to Salita from his New York Apartment over Zoom, it is clear that he is no stranger to challenges and obstacles, both in and out of the ring. Growing up in the Soviet Union, Salita recognised that that he was living in a “hostile environment” for Jews of all observance levels. He recalled that Soviet Jews would secretly listen to American Wave Radio to find out the goings-on in Israel and that Soviet Jewish people expressed their love for Judaism in the only way they knew how – “through their support of Israel”.

Arriving in the USA with his family on December 21st 1991, aged just nine, was Salita’s opportunity to engage with Jewish life. He received financial and communal support from organisations such as the Hebrew Immigrant Aid Society (HIAS) and other communal organisations serving Russian-Jewish immigrants, finally settling in Brooklyn. “Coming out of the Soviet Union I only heard of stereotypes and past tales of what it means to be Jewish.  Living in Brooklyn, slowly, I started to understand and experience life in the Jewish community step by step”. Although he had escaped the struggles and challenges of growing up Jewish in the Soviet Union, Salita soon realised that the USA was very different to how it was portrayed “in the movies.”

After a stellar rise through the amateur and professional ranks, Salita admits that defeat against Khan was his greatest obstacle – “the most challenging moment in my career.” Immediately after the fight, Salita was invited to visit Israel and remembers kissing the ground when he arrived and being overwhelmed with emotion and gratitude.  The lessons he learnt on that trip, visiting Yad Vashem and seeing how Israel had grown and prospered against all the odds brought home the message his trainer O’Pharrow used to tell him, “G-d works in strange ways.”

Ultimately, that loss was the catalyst for Salita setting up Salita Promotions, which has now grown into an international business representing some of the world’s best boxing talent. Amongst Salita’s impressive roster of fighters is heavyweight contender Jarrell “Big Baby” Miller, who was scheduled to challenge Anthony Joshua for his titles in 2019.  He also represents Otto Wallin, the Swedish southpaw who gave Tyson Fury a real scare in the same year, taking Fury the distance in a bruising and bloody bout.

Given the time Salita has spent with both Joshua and Fury, we couldn’t resist asking him who he thought would emerge victorious in the upcoming super-fight between Tyson Fury and Anthony Joshua. Although he praised the respective strengths of both fighters, Salita was clear, – “Tyson Fury has the edge.” So, who would make the better guest for Friday Night dinner? “They’re both good guys, I’d be happy to have either.”

Dmitriy Salita will be appearing in the latest instalment of JW3’s Global Diaspora Series, supported by Genesis Philanthropy Group. Taking place virtually, Dmitriy will be in conversation with sports editor Sarah Shephard, before questions are opened up to a global audience joining online.