THE DYBBUK STILL SPEAKS TO US 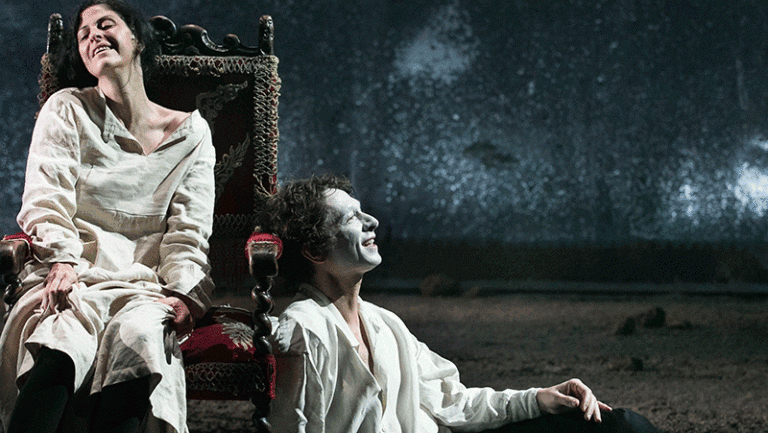 The Dybbuk still speaks to us. Not literally, of course. If we were communicating with the actual ghosts of our loved ones who met untimely deaths, it would require professional intervention.

Nevertheless, communing with the dead is the core of the plot of one of the most iconic plays in Jewish history. In it, Hanan, a destitute yeshiva student, dies prematurely and then possesses his true love, Lea, in order to have one last moment with her. Afterward, she rejects her father’s plans for an arranged marriage and the community intervenes and calls a rabbi to begin an exorcism.

The Dybbuk premiered on stage in 1920 and inspired a Yiddish film (1937), Hollywood films (1990’s Ghost and 2012’s Possession), operas, a Leonard Bernstein ballet and scores of major theatrical productions.

The play was written more then 100 years ago, from 1913 to 1916, by S. Ansky, after a series of expeditions exploring Jewish folklore in Russia and Ukraine. It was a time when the horrific violence of pogroms was ongoing and the famous Beilis blood libel trial captured public attention and fuelled anti-Semitism. Thus, it is hard to view this story of a life cut short as unconnected from the historical brutality that took so many Jewish lives – horrors that were later magnified by the Holocaust. An early death leaves searing unanswered questions. After all, who doesn’t dream of one last moment with a deceased loved one, just as Demi Moore’s character in Ghost did?

If anything, The Dybbuk, like Shakespeare’s greatest works, asks such profound moral questions that its story is reinvented with every generation.

Recently, in Israel, The Dybbuk took on a new life in a production by the acclaimed Gesher Theatre, led by Russian-Israeli director Yevgeny Aryeh. It will have its North American premier in Toronto at the Elgin Theatre on Sept. 29 and 30.

Now 70, Aryeh’s artistic ambitions were originally quashed after he first tried to leave the Soviet Union in 1980 to pursue religious and artistic freedom in the West. Nearly a decade later, he was finally allowed to leave and eventually settled in Israel. That experience as a refusenik played a part in a series of Aryeh’s award-winning psychological dramas. For Aryeh and the Gesher Theatre troupe, The Dybbuk had something new to say in the age of #MeToo.

The protagonist, Lea, is one of the greatest – and demanding – female roles ever written for the stage. She portrays the gamut of human emotions: the passion of reuniting with her true love, the mental illness of possession, the fear of an abusive father and the perseverance of choosing her own path. One cannot help but be reminded that dybbuks are almost universally male and seem to only possess female subjects. Efrat Ben-Azur, 40, one of Israel’s leading actresses of stage and screen, gives a riveting performance as Lea, transforming a role that has traditionally has been played by younger actresses. After all, a 20-year-old rejecting her father’s plans for an arranged marriage is quite different than a 40-year-old who does the same.

“In Israel, and most parts of the world, an unmarried childless woman in her 40s is often seen as, in a way, possessed, as if something is wrong with her, as if she’s sick,” explains Gesher’s playwright, Roe Chen. “That sickness used to be called the dybbuk.”

Gesher’s Dybbuk also asks: are women to be blamed for being possessed (analogous to suffering from mental illness)? Can we reject our parents’, or society’s, wishes when choosing a spouse? What would we ask our deceased loved ones if we had one last moment together? Can love conquer death?

Yes, The Dybbuk still speaks to all of us.