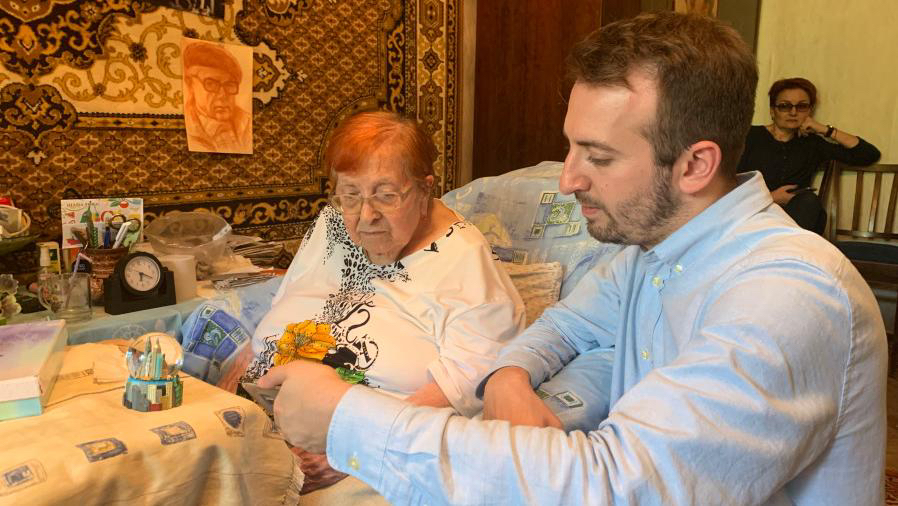 My spiritual true north is a little colder, a little more gray. It’s got a deliciously heavy Russian accent, and it’s drenched in sour cream.

I have a confession to make. In addition to my family – my grandparents on Long Island, my sister away at college in Allentown, my father-in-law on his Texas ranch – there is an unlikely group of people I miss during the High Holidays.

Among them are Faina, Yakov, Liudmila, and the dozens of other elderly Jews I’ve met traveling to places like Birobidzhan in Russia’s Far East and Bobruisk, Belarus.

You see, even with the nostalgia I have for the suburban New York synagogue I grew up in and even as I cherish the community in Columbus, Ohio, where my husband now serves as a rabbi, myth and memory live elsewhere for me.

My spiritual true north is a little colder, a little more gray. It’s got a deliciously heavy Russian accent, and it’s drenched in sour cream.

While other kids were captivated by Disney’s Jafar and Ursula, my family read stories about Baba Yaga, the villain of Slavic folklore who flies around in a mortar and pestle and lives in a house that stands on chicken feet.

I thank Khana for that. My grandfather’s first cousin came to New York during the last gasps of the Soviet Union, and throughout my childhood, we trekked to Brighton Beach for Rosh Hashanah and Passover and any other excuse we could come up with to eat her chicken soup, apple cake, and the world’s best latkes.

For years, that’s where the story stopped: Khana and her daughters used to be there, but now they were here. Simple, clean, sewn up.

I wasn’t alone in that. The truth is that the vast majority of American Jews haven’t thought twice about post-Soviet Jewish life. For decades, we’ve forgotten or simply did not know about untold scores of Jews who neither perished in the Holocaust nor moved to Israel and the US. It’s negligence, not malice – they’ve been there the whole time, but we so rarely go looking.

A few months ago in Minsk, I met Tamara Kalinkina, 79, a retired engineer who lives alone on about $4 a day. She’s an avid singer with a deep repertoire of Yiddish songs – no notes, straight from the heart.

The 1989 winner of the Soviet Miss Star beauty pageant, she didn’t need much encouraging to turn her one room apartment into Carnegie Hall, belting out something I’d never heard before: “A Brivele Der Mamen”, or “A Little Letter to Mama.”

The song tells the story of a mother left behind when her son leaves for America. She’s proud of him, but she worries: Will he stay safe? Will he remember her?

“Eight years I’ve been alone. Not a single letter has arrived,” Tamara sang. “He must be doing very well there, since he’s forgotten me.”

Her words cut me to the quick. For how many decades have we, benefiting from the blessings of the New World, failed to write to the “old country?”

I’M THE GRANDSON of immigrants. My nana left Warsaw as a young child in the 1920s. My zayde fled Ukraine when Nazis approached his shtetl in 1941, wandering as far north as Siberia and as far south as Iran before landing in a displaced persons camp after the war operated by JDC, the Jewish humanitarian group, where I now work.

When a family friend called my mother in 1989 to tell her Khana’s family had landed at JFK, there was amazement and joy, but there was also a strange blend of shock and surety. “But we don’t have any cousins!”

The old country for us wasn’t that old at all, and still, we were so convinced the story had stopped years earlier.

But what if we widened our lens? What if we realized that New York and Jerusalem, and all our communities in between, are stronger when we turn our attention to Jewish life in Odessa and St. Petersburg, too?

Despite the Holocaust, communism, Israel’s gravitational pull, and the successes of North America, there are hundreds of thousands of Jews in the former Soviet Union who aren’t going anywhere.

It’s not just Tamara and other vulnerable elderly Jews, like the nearly 90,000 my organization cares for in the former Soviet Union. It’s also the 41,000 people impacted by an intergenerational network of volunteers connected to Jewish communities in 44 cities across 11 time zones in that same region. And it’s also a Jewish youth initiative that began just five years ago in Ukraine and has branched out to reach 3,200 teenagers annually in post-Soviet nations.

All of this is made possible by longstanding partnerships with the Jewish federations, Claims Conference, International Fellowship of Christians and Jews, World Jewish Relief, Maurice and Vivienne Wohl Charitable Foundation, Genesis Philanthropy Group, BBYO, and foundations and individuals dedicated to keeping the Jewish flame in this part of the world burning bright.

One of my favorite High Holiday teachings comes from Maimonides, whose definition of teshuva (repentance) goes beyond its usual translation as “repentance.” He argues that it’s about much more than just saying we’re sorry. True teshuva requires us to arrive at the same place we once stood but make a different choice this time. It asks us to push ourselves to do better, go deeper, write a new story.

Jewish life in countries like Moldova and Georgia is real and begging us to see it in its fullness. Our job is to bolster and catalyze, to marvel and weep, to tell their story and share it.

This new year, let’s chart a new path. If we listen to our global Jewish family, I promise we’ll find so many stories with the power to nurture and sustain, to give our Jewishness complex and beautiful new textures.

These days, I know the letter I’d write to the woman in Tamara’s song, the yearning Jewish mother afraid she’s been forgotten.

“I’m sure you have a lot to teach me, and I’m here if you need help,” I’d tell that woman. “I’m not going anywhere, and neither are you.”

The Alex Weisler, a former journalist, a video producer and storyteller for JDC, the global Jewish humanitarian group.