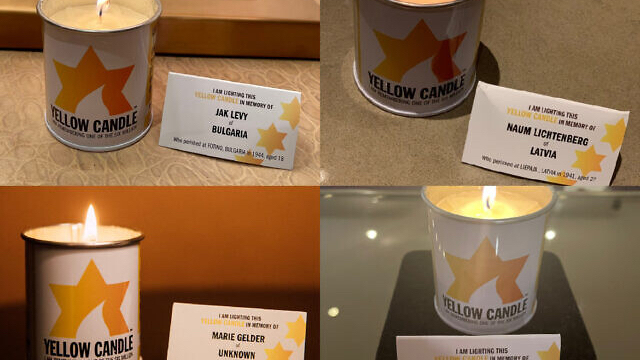 Yellow candles were lit across the Jewish community and beyond, as the world paused to mark Yom HaShoah.

Labour leader Keir Starmer, Rachel Riley, Facebook’s Nicola Mendelsohn and comedian Matt Lucas joined the initiative – alongside tens-of-thousands of others -to remember individuals who perished in the Holocaust.

Each candle came with an individual information card, including the name, hometown, place of death and age of the Jewish person who perished during the Holocaust – in a bid to ensure no person is forgotten.

The Yellow Candle initiative was co-ordinated by Maccabi GB, and included participants from across the UK and Europe, the UAE, Bahrain and United States. They included ambassadors, diplomats, MPs and communal leaders.

This comes amid an historic first ever Yom HaShoah ceremony in the Arab Gulf states, in wake of the Abraham Accords. Young Muslim leaders from the United Arab Emirates and Bahrain are speaking about their experience of learning about the Holocaust, and visit to Yad Vashem.

Ashley Lerner, CEO of Maccabi GB, said: “The lighting of thousands of Yellow Candles sends a powerful message – we must never forget the Holocaust and we will pass on the torch of remembrance to future generations as a vital stand against antisemitism and all forms of hatred”.

Amid the pandemic, Maccabi received support from Genesis Philanthropy Group to ensure the initiative could go ahead. Its CEO, Marina Yudborovsky, said: “Remembrance of the Shoah is a vital reminder of where toxic ideologies, hatred and intolerance can lead".

“At GPG, we are committed to ensuring that future generations know about this dark part of our history and become actively engaged in Holocaust remembrance themselves. It is particularly heartening that during these challenging times so many chose to take part in remembering and honouring the lives lost during the Shoah.”.

Yellow Candle Committee Chair Samantha Cohen said: “It is a testament to the power of the Yellow Candle initiative that even during these challenging times, tens of thousands of Yellow Candles have been distributed. For all of us involved, it is a privilege to play our part in ensuring that each victim of the Holocaust is remembered as an individual.”