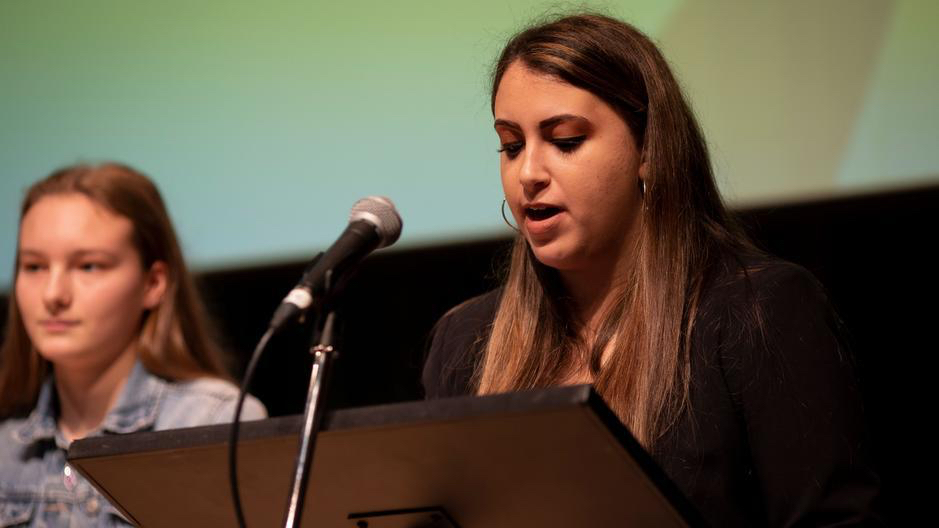 'I don’t see any reason why people like us can’t go into schools and universities and carry on these talks,' Chloe Kaye says at JW3 ceremony.

“In a short time there won’t be any survivors left – it will be our duty to carry on these stories. I don’t see any reason why people like us can’t go into schools and universities and carry on these talks.”

Chloe Kaye was one of four grandchildren of Holocaust survivors who gave a glimpse of the future of Shoah commemoration at JW3's Holocaust Memorial Day ceremony, standing side-by-side with their relatives while delivering powerful accounts of their experiences.

The Bristol University student, granddaughter of survivor Chaim "Harry" Olmer, told the JC: “In the future, I don’t think I will lose this strong connection I have.

“At my university, I helped create a Holocaust Memorial Day event. It was really powerful. I found a survivor and organised it and UJS helped me a lot.

“Because I had such a connection to the Holocaust, I wanted it to be my event and I became so passionate about it. It was really great and really inspiring.”

Ms Kaye was joined by teenagers Maggie Fleet and Jessica Helfgott – as well as journalist Darren Richman – at the JW3 ceremony.

Last year, Maggie, 14, won a Children’s Bafta for her film, Finding My Family: Holocaust, which followed her and her grandfather, Steven Frank, as they visited his childhood home and the Theresienstadt camp.

She told the JC she had already witnessed the “small scale” impact of retelling the story of how her "opa" – the Dutch for grandpa – survived the Holocaust and came to the UK.

Shoah education was "important on a mass scale, so it doesn’t happen again. But then our grandparents going into schools also affects things on a smaller scale – like with bullying in the playground. It makes people think twice about it.”

Jessica, the granddaughter of Sir Ben Helfgott, added that it was a "special thing to be related to a first-hand survivor.

“I now feel the duty to carry on my grandpa’s story and the story of the Holocaust, being so connected to it.”

For Mr Richman – producer of the Auschwitz: Prisoner 84303 documentary featuring his grandfather Zigi Shipper – using his platform as a filmmaker to promote Holocaust education “feels like the right thing to do”.

Actors Janet Suzman, Tom Conti and Juliet Stevenson and author Bart van Es were also involved in the JW3 event, which was supported by the Genesis Philanthropy Group.