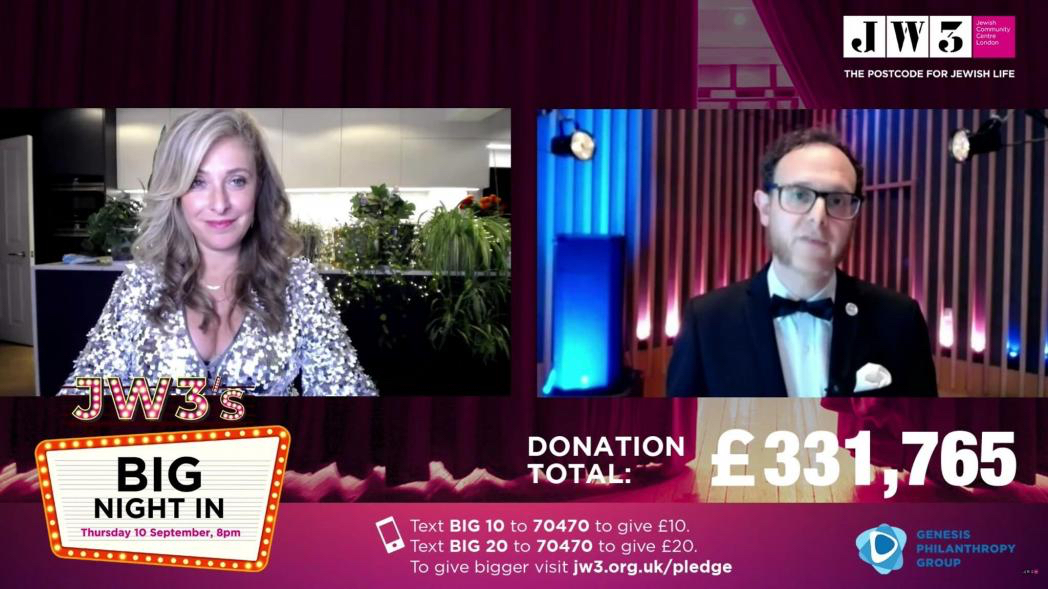 A record-breaking £331,765 was raised at the end of JW3’s first Big Night In fundraiser, Thursday night’s online event to support the Jewish Community Centre for London. Genesis Philanthropy Group (GPG), a long-time backer of the centre, gave £100,000 in matching funds for the event.

Raymond Simonson, chief executive of JW3, admitted he had “pulled in every favour” that he could, in order to provide a star-studded line-up of actors, writers and musicians, with Boy George — most recently working with Israeli rapper Asaf Goren — top of the bill.The evening was hosted by actress, writer and campaigner Tracy-Ann Oberman, and featured her in conversation with many of the guests, from actor Jason Isaacs to Oscar-winning song writer and producer Mark Ronson, sharing his memories of his late friend, singer Amy Winehouse.

Actor Simon Callow, well-known for his one-man show about Charles Dickens, chose Dickens’ Jewish “alter ego”, Israel Zangwill, reading an extract from his book, “King of the Schnorrers”; while JW3’s close neighbours, Imelda Staunton and her husband Jim Carter, spoke of their enjoyment of the centre’s winter ice rink and summer beach.

There was comedy from Alex Edelman and former NHS doctor Adam Kaye, together with JW3 fans Shappi Khorsandi and Stephen Fry. TV quiz queen Victoria Coren Mitchell provided an online quiz — no prizes, just the satisfaction of getting it right —while Arsenal TV’s Robbie Lyle lent a sporting spirit to the evening.Between the guest appearances and the good luck messages there were films to show the work of JW3, not least the volunteers who have prepared more than 50,000 meals for local people in need during lockdown.

Raymond Simonson, while “thrilled” at the amount raised on the night, said more financial support was needed, since JW3, by virtue of having to close when lockdown was imposed, had lost more than a million pounds in income. He hoped that people would continue to donate to what Tracy-Ann Oberman called “the beating heart of British Judaism”, and thanked everyone who had supported the event.

In a video message, Trustee of GPG Mikhail Fridman, expressed his warm wishes, saying: “JW3 is a very important focal point of the Jewish life of London and more broadly the UK. It is also a personal matter for me, because I live in this neighborhood and remember very well an unforgettable evening with my friend and hero Natan Sharansky on stage at JW3. Part of Genesis Philanthropy Group’s mission is to create meaningful and innovative opportunities for Jewish engagement in the UK. That is why we do everything we can so that JW3 not only survives, but thrives, and can continue to provide all of its outstanding programmes that contribute to a vibrant British Jewish community”.