SHEDDING LIGHT ON THE ‘SILENCED’ HOLOCAUST 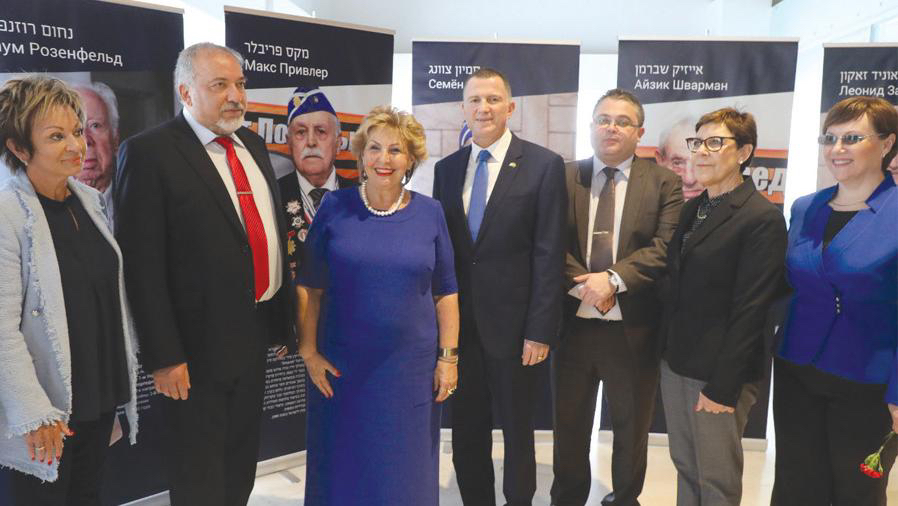 These interactions give the participants the impression of belonging to the greater Israeli society and culture, making successful absorption in Israel easier.

For over a decade, the collaborative partnership between Yad Vashem, the World Holocaust Remembrance Center and the Genesis Philanthropy Group has been connecting Holocaust commemoration, research and education in an effort to disseminate the story of the Holocaust in the Soviet Union.

The Holocaust was the systematic murder of Jews throughout Nazi-occupied Europe and North Africa during the Second World War. Before Operation Barbarossa, Germany’s invasion of the Soviet Union, on June 22, 1941, there were some 5,100,000 Jews in the USSR. 2,600,000 of these Jews were murdered during the Holocaust. Between 350,000 and 500,000 Soviet Jews fought in the Red Army and about 140,000 of them fell in the battles.

After World War II, the Holocaust as a uniquely Jewish experience was largely unknown and even ignored by the Soviet regime. Only after the Iron Curtain fell in the early 1990s did knowledge and information about the Holocaust in the Soviet Union begin to come to light.

Since 2008, Yad Vashem and the Genesis Philanthropy Group have curated exhibitions, produced videos, published dozens of educational materials, trained hundreds of teachers from around the world and uncovered vast amounts of new documentation on the Holocaust in the USSR. This research led to the discovery of more than 200,000 new names that have subsequently been added to Yad Vashem’s Central Database of Shoah Victims’ Names.

Based on the success of this partnership, Yad Vashem launched a special project in 2017 for new Russian-speaking immigrants. It incorporates daylong seminars and roundtable discussions, together with exhibitions displayed in their home cities detailing the fate of veterans of the Red Army during the Holocaust. A similar exhibition was curated and displayed for the Knesset on May 9, the day the Allied victory over Nazi Germany.

Tanya Manusova, advisor to the Yad Vashem Director-General, explains, “Many new immigrants from the FSU do not know in great depth about these events. Our goal is to share with them our shared narrative and provide them with knowledge and understanding of worldwide Jewry.

These interactions give the participants the impression of belonging to the greater Israeli society and culture, making successful absorption in Israel easier.

As a result of their visit to Yad Vashem, they have a greater appreciation that we are one people.” The program, in its third year, hosts approximately 800 visitors annually. Manusova says that the feedback from participants has shown it to be transformative.

Ashkelon, Bat Yam and Hadera were the first municipalities to join in this program. Within the framework of this project, participants aged 30 through 50 tour the Holocaust History Museum and the Children’s Memorial, which pays tribute to the approximately 1.5 million Jewish children who were murdered during the Holocaust. In addition to the tours, they participate in lectures led by Russian-speaking experts, who themselves participate in special training from Yad Vashem’s Commemoration and Community Relations Division.

In 2018, Tel Aviv, Lod, Kiryat Malachi, Yokne’am and Katzrin also participated in this project and additional municipalities and regional councils have expressed interest in sending residents to this important project. Ashkelon First Vice Mayor Sofia Beilina says, “I am deeply convinced that our cooperative project with Yad Vashem and the Genesis Philanthropy Group is vital for new immigrants – especially for the younger generation – and will deepen their connection with the People of Israel and our history. Visiting the Mount of Remembrance will help continue the link between generations and affiliate our new citizens with our shared historical heritage.”

“The tour of Yad Vashem and the lectures were extremely impressive not only for me, but for the whole group,” remarks Bat Yam resident and seminar participant Vitaly Moroz. “This was one of the most memorable and impactful days of my life and will remain with me forever.”

Natalie Shnaiderman, director of global grant-making at GPG, explains that in Russia, the study of the Holocaust is still not part of the school curriculum.

“The new generation is often not aware of the entire narrative. For them, the visit to Yad Vashem is a very emotional and important day that closes the gap between their self-identification and their knowledge of history.”

She explains that many immigrant participants are shocked to learn the scope and scale of the Holocaust. For many, this is the first time they encounter a Jewish narrative to these events.

Shnaiderman continues, “We want to enable Russian-speaking Israelis, especially those from the new generation, to meaningfully engage with their own Jewish narrative and connect intellectually and emotionally to the history of the Holocaust. Without understanding the events of the Holocaust, it is hard to strengthen their Jewish identity. A central part of their identity will be missing.”

The history seminar that participants attend, she says, is particularly important, because it provides possible answers to difficult questions. Shnaiderman added that the Soviet regime created significant difficulties in collecting historical data on the Holocaust in the USSR.

“The general public is largely ignorant of the scale of the Holocaust in the territories of the Soviet Union and the efforts that the Soviet regime took to prevent it from being part of the public discourse.” As a result, Shnaiderman explains, the study of the events that took place there lags far behind the research that has been conducted in other European countries. These gaps need to be closed by finding archival materials, helping in scholarly analysis and assisting Holocaust researchers.

“Yad Vashem, with its professionalism and experience, can effectively teach the history of the Holocaust in the USSR,” says Manusova. “Telling the story of these events leads to a more meaningful future in which we will better understand and appreciate our shared Jewish identities.”