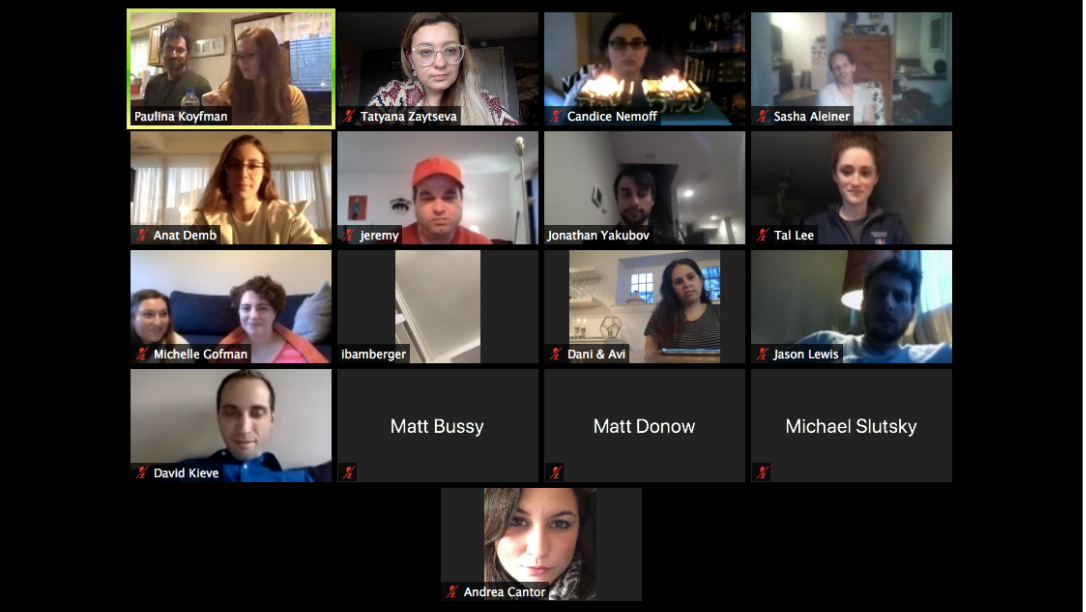 “Philly became part of my portfolio early on,” said David Press, Moishe House’s senior director of advancement. “It became clear that there is a very sizable Russian-speaking Jewish community in the city.”

Press noticed there was a lack of programming catering to young adults from this community, despite its size.

“The more broad-reaching opportunities for Jewish life for young adults don’t resonate as well for them because their upbringings were very different,” he said.

He explained that many of these young adults didn’t know they were Jewish until later in life and had a different frame of reference than many of their peers for engaging with Judaism in a meaningful way.

Entering a space where they may be unfamiliar with the prayers, rituals and activities could be intimidating.

Press and Zaytseva knew there was demand for a Russian-speaking house.

“The only thing we needed was feeling secure we had the financial resources,” Zaytseva said.

Those resources were provided by Genesis Philanthropy Group, Liebhaber Family Foundation and the Bernard and Etta Weinberg Fund.

The new Moishe House opened on March 1 with Paulina Koyfman and Jonathan Yakubov as residents. Koyfman and Yakubov are both children of immigrants from the former Soviet Union who grew up speaking Russian at home.

Before the pandemic required social distancing, Koyfman and Yakubov kicked off the house’s first month with a pizza party and a celebration for Vos’mya Marta, or March 8, a Soviet holiday that honors women’s strikes for labor and voting rights.

“It’s a day to come out and show appreciation for women and show they are just as strong as men,” Koyfman explained. “It’s treated like a Mother’s Day, but for all women.”

When coronavirus restrictions made it impossible to host large gatherings, Moishe House decided to suspend all in-person programming requirements. Press said they continued to pay rent subsidies to house residents, which are usually provided as compensation for organizing and hosting community events.

“Even with what’s going on in the world right now, their desire to create and build this community virtually … it’s really been inspiring. There’s no requirement for programs, and yet there’s still this passion and desire to continue in their spare time to create programming and offer people opportunities to gather and inspire people to connect in new ways,” Press said.

Koyfman and Yakubov moved their March 20 Shabbat online and got a much bigger turnout than expected.

“A normal Moishe House event is about 20 people because it’s a small space, and we had about 25 people for this,” Koyfman said.

They invited members of the organization’s other new Russian-speaking houses in Toronto and Atlanta to participate.

“They asked me to help them with some Jewish learning,” Zaytseva said. “It was such a beautiful event.”

Press was impressed with the residents’ first virtual event.

“With all this craziness, without looking at the negative, they saw the opportunity not only to create something in Philly but create an opportunity for residents in Atlanta and Toronto who were dealing with the same things.”

Koyfman and Yakubov’s programming included an online classical music concert through Groupmuse, which usually provides classical music shows in living spaces but has moved to YouTube due to the coronavirus.

They have already hosted a virtual Shabbat this month and have other online events planned, including a Quizzo with Tribe12 on April 13 and a Q&A with Philadelphia’s Jewish dating experts on April 19.

“People have been pretty excited about the events,” Yakubov said. “We just started a month ago and we didn’t know what to expect and all of a sudden we had to turn everything virtual.”

Koyfman and Yakubov are still looking for a young Jewish professional to be their house’s third resident. The hiring and onboarding process will be conducted online.

“It’s a lot of work to run a Moishe House but it’s very rewarding. You have to really love talking to people and enjoy human connection and want to help foster it,” said Koyfman.

Yakubov added that no previous experience planning Jewish events was necessary, but that someone with a background in Jewish education could be a strong addition to the house.