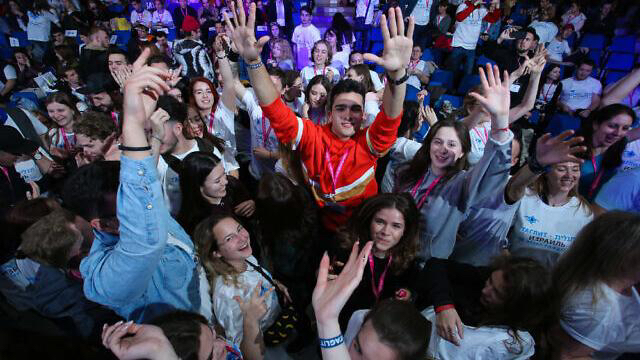 Around 800 visitors from Russia, Ukraine, Belarus and Azerbaijan attended the ‘Taglit in the Flourishing Desert’ event.

Celebrating Birthright’s 20th year, around 800 visitors from Russia, Ukraine, Belarus and Azerbaijan attended the ‘Taglit in the Flourishing Desert’ event in the western Negev to “show long-standing support” for the residents and businesses near Gaza.

Activities included food-tasting, graffiti workshops, drumming circles, bike tours and even “laughing yoga” as participants toured places such as Ashkelon and Sderot, as well as kibbutzim and moshavim.

The evening event in Eshkol Cultural Hall was opened by actress and singer-songwriter Ania Bukstein who, born to a Russian-Jewish family in Moscow, told the participants her story, from studying classical piano from the age of five, immigration to Israel and rise to international fame.

Gidi Mark, chief executive of Birthright Israel, said the visit was “humbling and a source of great pride…”.

He added: “It is important our participants experience the real Israel, the good and the bad, and can speak from a place of understanding when they return to their communities.

“They are part of a legacy, and have the opportunity to take their experiences home, and be part of a strong, thriving international community of Russian-speaking Jews.”

Ilia Salita, president and chief executive of GPG, said: “This is a partnership that aims to ensure that one of the leading projects of the Jewish people will always remain attractive and relevant to young Russian-speaking Jews worldwide. Today, more than 70,000 FSU [former Soviet Union] participants later, Birthright Israel goes onwards and upwards, powering the Jewish identity of young Jews, strengthening their bond with Israel and fostering new networks of personal connections.”

Dr Haim Ben Yaakov, director-general of the Euro-Asian Jewish Congress, said: “We are proud to support this important event, which brings the diaspora Jewish youth closer to the State of Israel.”