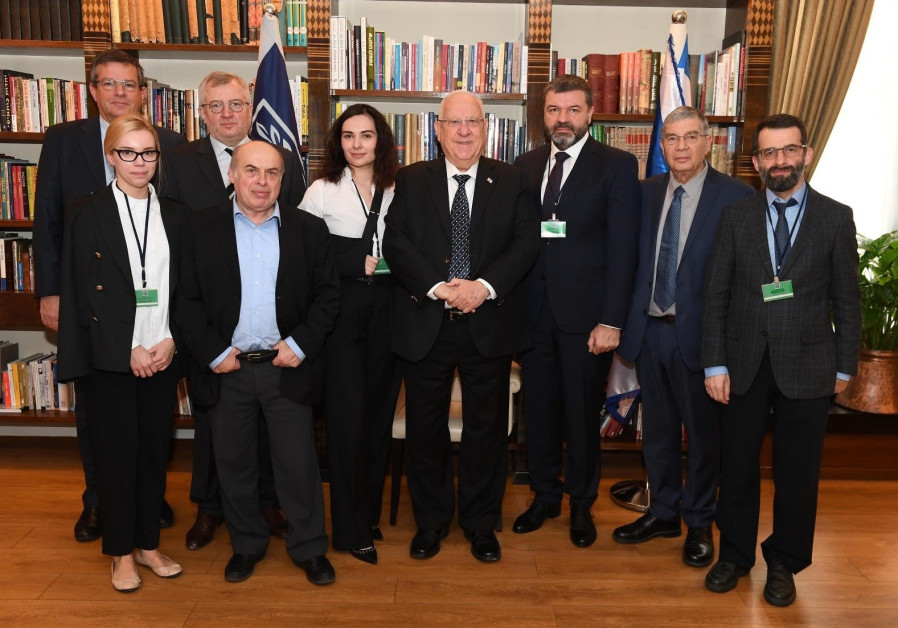 President Reuven Rivlin threw his weight behind plans for a Holocaust memorial center at the site of the Babi Yar massacre, in a meeting with representatives of the Babi Yar Holocaust Memorial Center (BYHMC) last week.

A delegation from the Center met with Rivlin in Jerusalem on Thursday, presenting him with their plans, as well as the basic historical narrative of the project.

Among the 150,000 victims thought to be buried there are 33,771 Jews who were killed in just two days – September 29-30, 1941. The victims of other massacres at the site, a majority of whom were Jewish, included Soviet prisoners of war, Roma, and Ukrainian nationalists. The inclusion of the latter alongside the other victims, however, has outraged some Ukrainian Jews because many of them were antisemites and collaborators.

Rivlin expressed his support for the center, stressing the importance of preserving historical memory in order to prevent the replication of past mistakes in the future.

“Last week I was in Thessaloniki, in order to lay the cornerstone of the new Holocaust Museum, along with the Prime Minister of Greece,” he said. “There are symbolic stations to everything that happened to the Jewish people over the last 200 years, and especially during the Holocaust.

Thessaloniki is one of them; Babi Yar is another one of them, of course the Warsaw Ghetto and the concentration camps… It is a pleasure to meet all of you, because this is something that is so necessary.”

He added that efforts of this kind are vital for the education of the younger generations.

This is at least the fourth attempt in Ukraine to commemorate Babi Yar; the current attempt has also been met by opposition since it was launched in September 2016.

Among the objections to the plans, critics have said that the project ignores non-Jewish victims. A group of Ukrainian historians wrote in a letter of opposition to the center: “We consider it a mistake to associate Babi Yar only with the history of the Holocaust while ignoring other victims and other dramatic moments of its history.”

But Yana Barinova, the chief operating officer for the museum, told a small group of journalists in Jerusalem on Thursday that while the project is focused on the Holocaust, it does not erase other victims.

She noted that another museum is being planned to tell the story of the site of Babi Yar from the beginning of its existence, and that “these projects are complementary and can coexist.”

Another concern was that the center was being built on top of the site of a Jewish graveyard, but Tablet, the American Jewish online magazine, reported that the center had obtained clearances from international halachic authorities to build on the site.

The project aims to pay tribute to all the victims and tell the story of their lives, as well as to become a research center specializing in Holocaust crimes in Ukraine and Eastern Europe.

“Yad Vashem [Israel’s official Holocaust memorial complex] is definitely the benchmark, and we are in close cooperation with them,” Barinova said.

Yad Vashem has agreed to participate in the project in an advisory capacity. Dr. Arkadi Zeltser, Director of the Moshe Mirilashivili Center for Research on the Holocaust in the Soviet Union at Yad Vashem, is a member of the BYHMC Review Council.

The BYHMC delegation met with Yad Vashem Chairman Avner Shalev and Zeltser, who said: “It is very important to maintain a historically accurate and balanced representation of the events during this very complicated period during the Second World War. Between 29-30 September 1941, 33,700 Jews from Kiev were murdered by German Nazis at Babi Yar. Babi Yar is one of the main symbols of the Holocaust in Ukraine and Eastern Europe.”

The Supervisory Board of the Babi Yar Holocaust Memorial Center is led by Kiev Mayor Vitali Klitschko.

The board includes: Rabbi Yaakov Dov Bleich, Chief Rabbi of Kiev and Ukraine; Mikhail Fridman, Co-Founder of the Russian Jewish Congress and the Genesis Philanthropy Group; former US senator Joe Lieberman; and Jewish Agency Chairman Natan Sharansky, among many others.

“Ukraine remains a blind spot on the map of the Holocaust memorials,” said CEO of the BYHMC, Gennadii Verbylenko. “Our goal is not about construction but about building trust. We intend to be a community-building institution. BYHMC is about remembering the past and building the future.”