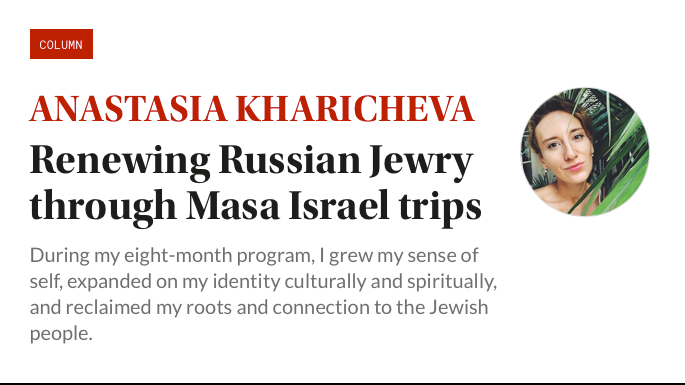 During my eight-month program, I grew my sense of self, expanded on my identity culturally and spiritually, and reclaimed my roots and connection to the Jewish people.

The Russian-speaking Jewish community is larger than we know: In addition to many proud Jews, it also includes members whose Jewish identity has been buried so deep by a challenging and painful history that they remain unaware of its existence.

I didn’t know I was Jewish until I was 20. If not for a timely and transformative trip to Israel that helped me take ownership of my Jewishness, I would have been lost to my people.

Ilia Salita, the CEO of Genesis Philanthropy Group who passed away in June, understood the need to re-engage Jews like me. He recognized the importance of reaching out to Russian-speaking Jews around the world—nurturing their connection to Judaism and helping them find their place within the global Jewish community. As part of this mission, over the past six years, the group has collaborated with Masa Israel Journey (founded by the Jewish Agency and Israeli government), building and funding programs like mine. Masa offers Jews from the former Soviet Union educational programming that enriches what may be our first significant Jewish encounter, feeds our hunger to learn about our heritage and fuels our sense of belonging.

During my eight-month program, I learned about the experience of Jews in Israel and from around the world. I grew my sense of self; I expanded on my identity culturally and spiritually, reclaiming my Jewish roots and connection to a colorful, caring and creative Jewish people.

Through the Masa Leadership Center’s (MLC) training programs, I discovered a profound sense of global community and my role within it. Growing up outside the Jewish community, I never realized how much I had in common with other young Jews today. In Israel, I had the opportunity to connect with them, explore these similarities and appreciate our differences, too. I broadened my perspective and learned how my story fits into the context of today’s Jewish experience.

With GPG’s support, I and dozens of other Russian-speaking Fellows convened for MLC’s first-ever Transition, Integration and Change Summit. There, we examined our leadership capacity within the Jewish world. Change is hard, especially when it involves shaping a whole new identity. I gained tools to develop the resourcefulness, resilience and creativity to support my personal growth, and eventually, to affect social change.

In Israel, I was empowered to deepen my relationship with Judaism. During my four-day Masa ID excursion, I traveled to Tel Aviv, Jerusalem, northern Israel and other landscapes with friends. We were empowered to have meaningful conversations and ask questions along the way. We visited the Joseph Bau House Museum. A Holocaust survivor, he became a Mossad agent whose wedding was featured in the film Schindler’s List. At the museum, Joseph’s daughter personally shared with us about her father and other Jewish heroes. I was inspired to watch Schindler’s List again with a better understanding of the incredible people in it. The story encompassed to me the beauty that is Israel. The country was built by people who lost everything, witnessed the worst of humanity, and yet had the courage to move forward and work towards a better world. They turned a desert into a thriving country, which I am thankful to experience today.

At the end of my life-changing experience with Masa, I surprised myself by making aliyah. Living in Israel long-term was something I never imagined when I boarded a plane. But after spending months discovering the country and my place in it, I formed a deep bond with Israel and couldn’t bear to part from it.

Without both Masa and the Genesis Philanthropy Group, I would likely be in Russia right now, knowing that I was Jewish but at best perplexed as to what that meant. I feel blessed to have gained an understanding of my role within the global Jewish community, along with the responsibility it entails to give back to the people of which I am so grateful to be a part.

Legacy is complicated. Legacy outlives us. Yet in some ways, it is what we live for—namely, to have an enduring relationship with this world even when we are no longer a part of it. I did not know Ilia personally and cannot obviously communicate this to him. If I could, I would want him to know that like me, there are thousands of Russian-speaking Jews whose lives he fashioned in ways that will live on as each of us continue to explore this expanded web of relationships that GPG opened up for us with the Jewish world, with Israel, and most intimately, with ourselves.

May his memory be for a blessing.

By Anastasia Kharicheva, a Masa career alum and graduate of the Masa Leadership Center