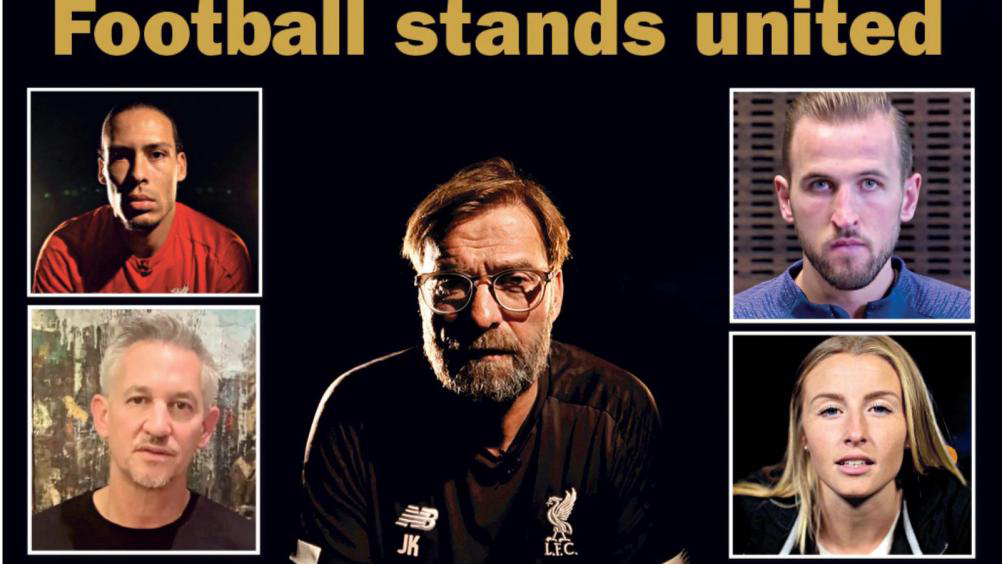 Among those taking part are England men’s and Women’s captains Harry Kane and  Steph Houghton, Virgil van Dijk, Willian, Callum Hudson-Odoi, James Maddison, as well as managers Frank Lampard and Jurgen Klopp, and BBC Match of the Day host Gary Lineker. The video is to be played at football stadia nationwide around Holocaust Memorial Day.

‘Stand Up’, a collaboration between the National Holocaust Centre and Jewish News, features the high-profile footballing figures speaking, while the video is inter-cut with images of the Holocaust and examples of hatred or ‘othering’ in everyday life today.

There has been an increase in racist incidents in football stadia in recent months and organisers of the project say the video addresses “the silence of good people who stand by and do nothing,” which they called “the great enabler”.Other Premier League players involved include Fran Kirby, Fikayo Tomori, Eric Dier, Harry Winks, Jesse Lingard, Leah Williamson, Lukasz Fabianski, Mark Noble, Gary Cahill, Christian Benteke, Lewis Dunk, Glenn Murray, Will Hughes, Nathaniel Chalobah and Phil Jagielka, and manager Roy Hodgson.

Interim National Holocaust Centre Museum (NHCM) chief executive Marc Cave said the video, sponsored by the Genesis Philanthropy Group (GPG), should act as “a jab in the chest of every decent football fan… Britain’s soul has turned a little ugly in recent years and football is a window to that soul.”

He added: “Evil happens when good people look the other way when we see a banana skin thrown at a black footballer, or a lesbian couple beaten up on a bus, or an Orthodox Jew punched on the streets of London.”

The project follows the museum’s award-winning hip-hop video Edek, in which a rapper tells the story of an 86-year old Holocaust survivor who was saved as a little girl from the Nazis by a resistance fighter, and aims to inspire “upstanders”.

The Jewish News’ Justin Cohen, who conceived the project, said: “All too often over recent months we’ve looked on in horror as ugly scenes of racism have marred the beautiful game. So it is particularly timely to bring the lessons of the Holocaust about where verbal abuse and ‘othering’ can lead to many millions of football fans nationwide. “Although Chelsea have taken a lead on raising awareness of the horrors of the Shoah as part of its Say No to Antisemitism campaign, this is the first time so many leading clubs have come together to back such an initiative ahead of Holocaust Memorial Day.”

GPG trustee Mikhail Fridman said: “As a grandson of Holocaust survivors, this initiative holds great personal significance. Watching footballers who serve as role models far beyond British shores, taking such a resolute stand – and standing up against hate and prejudice – isn’t just inspiring. It gives us hope that racism and prejudice one day will become part of the past.”