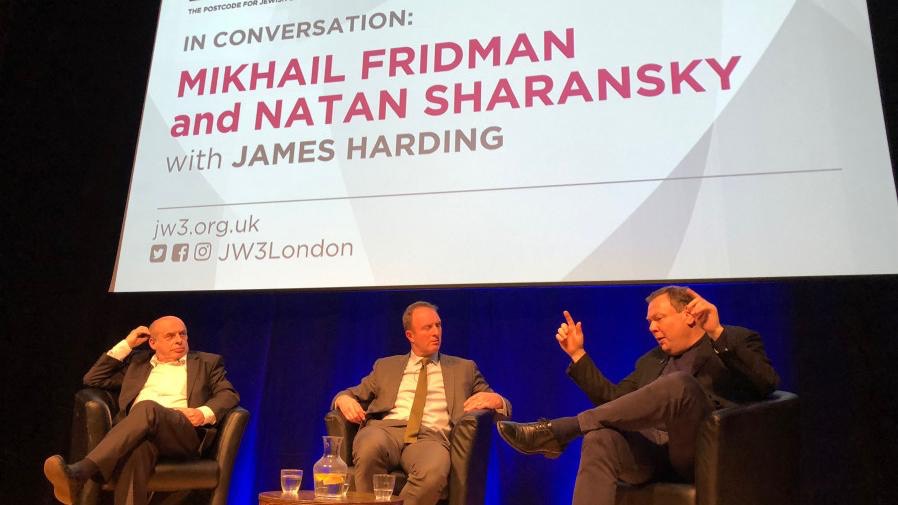 Russian-Israeli Mikhail Fridman spoke about the need for dialogue between Jews inside and outside of Israel, during an event at JW3 in conversation with Jewish Agency chair Natan Sharansky.

On of the Jewish world’s most prominent philanthropists has publicly regretted that there is “no legitimate forum for the exchange of opinions between Israel and the diaspora”.

Mr Sharansky, once the most famous Soviet Jewish refusenik, and Mr Fridman, co-founder of the Genesis Philanthropy Group (GPG), were the guests at a sell-out event whose audience included scores of young Russian-speaking Jews living in London, rarely seen at mainstream Jewish community events.

James Harding, director of news at the BBC, chaired the conversation which began with an analysis of identity and developed into a discussion of the different needs of Israel and diaspora communities. Though there is an age difference between the two men — Sharansky has just turned 70, while Fridman, one of Russia’s richest men, is 53 — both had a remarkably similar story to tell about growing up as Jews in the Soviet Union.

For Sharansky, who was “an absolutely assimilated Jew who felt part of the Russian people”, there was “nothing Jewish except antisemitism in my life”. The turning-point for him came after Israel’s victory in the 1967 Six Day War, when Russians would refer to him as part of the Israeli people.

Fridman recounted how he had grown up in Lviv in a very secular family. Like Sharansky, he said he had been told by his parents that he had to work five times as hard as his Russian classmates, precisely because he was Jewish. And, he said, “the state reminded us every day who we were. It was always clear that we had a lot of limitations and boundaries”. These related to the universities Jews could attend, or the jobs for which they could apply.

Sharansky, who had a long career in front-line Israeli politics after he was freed from the Soviet Union where he spent nine years in prison, paid tribute during his remarks to three British Jews who had played an important role in the struggle for Soviet Jewry. Two were in the audience: Rita Eker of the 35s (Women’s Campaign for Soviet Jewry) an June Jacobs. Sharansky also recalled the contribution of the late Greville Janner, father of Rabbi Laura Janner-Klausner, who is on the advisory board of the Genesis Prize.

At least one remark by Natan Sharansky is likely to have captivated the non-Russians in the audience: his declaration that in Russian president Vladimir Putin, “we have a Russian leader who loves Jews”, joking that “for him, Israel is a Russian-speaking Jewish country”.

Mikhael Fridman declined direct comment on Putin, but agreed that “for the time being Russia is the most tolerant society for Jews that it has ever been”.

Much of the discussion focused on the need to strengthen the Jewish identity of Russian-speaking Jews outside Israel. Sharansky, who made frequent reference to the need for aliyah, nevertheless declared that he “did not agree that every time there is a terrorist attack in the diaspora, [those communities] should be urged to go to Israel. They do not need to hear the voice of the Commissar of Zionism. I do not want people to feel that Israel is a shelter. I want them to feel a special pride in belonging to this people; and I want to build a corps of young Jews who are not ashamed of association with Israel”.