PASSION AND JUDAISM ON PARADE IN ST. PETERSBURG 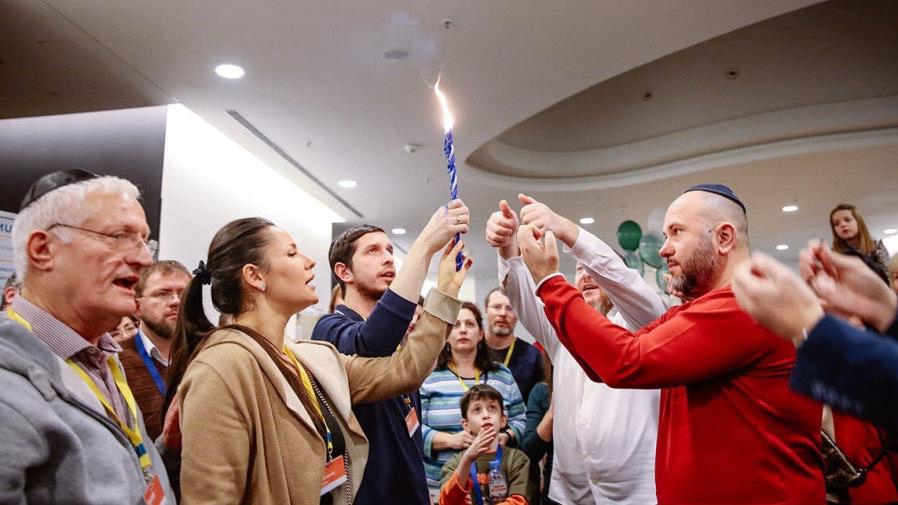 The Iron Curtain has long parted as hundreds of involved Jews descend on Russia’s cultural capital for the Limmud FSU festival.

The storied backdrop of St. Petersburg played host to 600 Russian Jews in early February, when Limmud FSU’s three-day Jewish festival of learning and culture took the city by storm.

The hotel corridors pulsated with energy and excitement as attendees – singles, young couples and families alike – came from all corners of the former USSR to take part in the pluralistic weekend event, which is driven by community volunteers who take ownership of and great pride in the conference subject manner and planning. Everyone, regardless of education or status, has a place at Limmud FSU, as attendees become presenters when they share their knowledge in sessions they lead, but also act as participants who enjoy the festival and learn new things. (Among the attendees? Limmud superfans in the form of a Florida physician and a Californian who had relocated to Ukraine.)

This year’s eclectic offerings, with more than 100 lectures, workshops and discussions, had something for the most varied palette, with Jewish- and non-Jewish-related content including:

The former Leningrad, once a crumbling Communist shadow of its former self as depicted so splendidly in the pages of Russian classics such as Anna Karenina, is today back in full tsarist force and is home to one of the most vibrant, flourishing Jewish communities in the former Soviet Union with roughly 100,000 Jews. Limmud’s annual conferences here, which began in 2011, reflect the high-caliber, cerebral programming worthy of a Jewish learning festival in Russia’s cultural capital.

“This is my second time at Limmud,” revealed St. Petersburg native Masha Kagan, 25. “I was so excited after my first one in 2017 that this time I brought along my parents and my best friend. It is such an amazing and unique happening; every member of the Jewish community here should experience it at least once. Next year I also plan to be a volunteer.”

I stood back and watched as my brethren, foreign to me in language and custom but so alike in spirit, rushed through the halls to get to the next session (I was partial to “Paperless Techniques for a Fantasy Scrapbook” and “Feminism and Judaism”), stopping for a beer at the bar or to pose with selfie-friendly likenesses of Theodor Herzl and Golda Meir. We broke dark brown bread and chowed down on pickled tomatoes together in the dining hall, bringing in Shabbat with kiddush and song. The fact that we were free to do this in what was once the ultimate repressive, anti-Jewish stronghold still blew my mind.

“We take pride in playing a central role in one of the most dynamic Jewish communities in Russia,” enthused an ebullient Chaim Chesler, founder of Limmud FSU. The organization plays a crucial role in creating a place for St. Petersburg’s Jews to come together and stay connected as a community, he noted – not just over the festival weekend but all year long, as they plan it.

“This project truly has it all – a wonderful atmosphere, high-quality program and presenters, effervescent spirit and a very engaged audience hungry for a Jewish learning experience.”

Alex Mershon, director of Nativ’s department of culture and education in the Prime Minister’s Office, concurred: “We have supported Limmud FSU’s activity for many years. This wonderful platform enables young adults to conduct discussions and take part in lectures and sessions relating to the State of Israel, the Jewish world, education, culture and more in a great atmosphere. Nativ recommends Limmud FSU, because of the great importance and impact it has on the community.” The conference was made possible through the support of his organization as well as the Genesis Philanthropy Group, Russian Jewish Congress, Jewish Agency and others.

Waving goodbye to the Shabbat Queen, we danced and sang at the communal havdala, then settled in for some classical music by the Alexei Aigl Band. (The violinist and cellist were on point.) Post-concert, I retired to the lobby bar with two new friends, who (stereotypically but adorably) toasted me with chilled shots of vodka and sour cream-laden borscht. How did one say cheers? “Proost?” “Nostrovia?” Close enough!

The happy whirlwind was over too soon, and I vowed I would return next year to catch part deux of “Perceiving Russian Art and the Jewish Artist Levitan” and “The Secrets of Beer Making.” Chelser affirmed, “This is our seventh event in St. Petersburg and we look forward to continuing the tradition for many years to come.”

The city of St. Petersburg worked its magic on me on my first visit: Enveloped in a Dr. Zhivago-inspired fur coat and millinery against the winter winds and sugary falling snow, I pranced (squished) along the grand boulevards, heading straight for the halls of the must-see Hermitage. The buildings and grounds themselves were works of art; its sheer size demanded months of visits and being that I had only a few hours, I chose the tsars’ private apartments in the Winter Palace. This bucket-list item did not disappoint – gold-encrusted chaises, chariots and be-plumed thrones abounded; it wasn’t hard to imagine that in this riot of red velvet, Russian royalty and pretenders to the throne had taken tea and hatched coups.

The smaller Russian Museum offered more contemporary but no-less-fascinating artifacts in the form of figurines and china emblazoned with hammers, sickles and threshing workers, testifying to the glory of Comrades Lenin, Stalin, et al.

Taking a moment to refuel in the stately cafe in the Singer bookstore on the Nevsky Prospekt main drag, Russia’s answer to New York City’s Strand, I sipped (guzzled) my perfect hot chocolate with its mountain of whipped cream, gazing out the picture window at the imposing Kazan Cathedral. The people around me were deep in conversation, pulling out smartphones only here and there. I was glad to be phoneless.

I caught mere hints of the Cold War that had frightened me as a child in President Ronald Reagan’s America: the famous statue of a pointing Lenin at Finland Station reminded me that the KGB had once been all-seeing; I wasted no time getting out my passport for the stern hotel receptionist insisting her notes said it was expired (it wasn’t). I held my breath at airport customs as a formidable clerk perused my documents for a few minutes – would I be taken away, deep into Mother Russia, never to be heard of again? – finally motioning their da for me to go on.

It was time to depart this somewhat alien world, but I would take my memories – and Matryoshka dolls – with me.