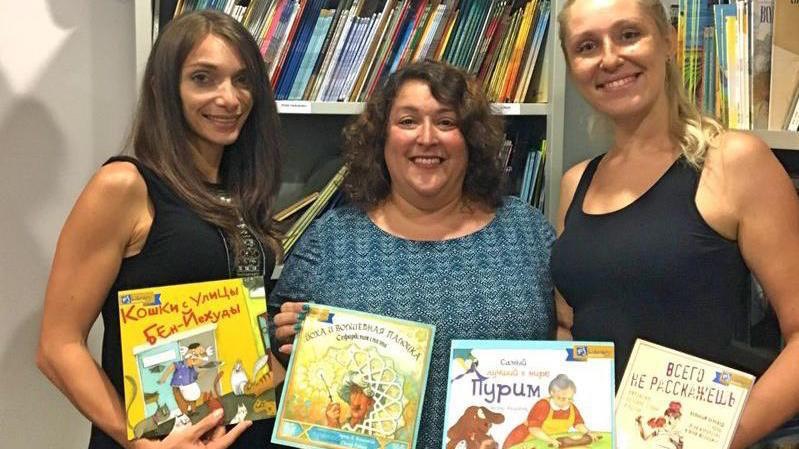 Russian Jews living in South Florida have opportunities to participate in events catered for them.

PJ Library-South Palm Beach County is one of only seven RSJ Engagement Grant recipients, and the only one in Florida, in the country. The winning initiatives are designed to build social connections among Russian-speaking Jewish families and engage them in Jewish life, friendships, programming and learning. Activities might include Jewish holiday celebrations, cultural outings, informal gatherings, Shabbat dinners, programs for parents, and more. There are also PJ Library books available in Russian.

This grant is a partnership initiative of the Harold Grinspoon Foundation, which operates the worldwide PJ Library program that provides free books to 640,000 families raising Jewish children all over the world, and Genesis Philanthropy Group, a global foundation focused primarily, but not exclusively, on developing and enhancing Jewish identity among Russian-speaking Jews worldwide.

Elana Ostroff, PJ Library-South Palm Beach County director, explained what this grant means for local Russian-speaking Jewish families: “We’re hoping that we can have opportunities for them to come together as part of our larger Jewish community. This would give them an opportunity to be together and participate in Jewish programming through PJ Library and really engage through us in our Jewish community.”

Two PJ Library mothers from West Boca, Marina Goldberg and Julia Orel, have begun to work with Ostroff to coordinate the Russian-speakers programming. Goldberg moved to the U.S. from Kiev, Ukraine as a child with her family. “There was almost no opportunity to learn about Judaism there, and it was not 'cool to be a Jew,’” Goldberg said in a news release. “It’s so important to reach out to Russian-speaking Jewish families. They are mostly unconnected to Judaism, but once they connect with great activities, they are drawn to such fun ways to learn.”

Orel, who is also originally from the Ukraine, came to the U.S. five years ago from Crimea. “I love how PJ Library offers so many ways to understand Jewish life and heritage, and the Jewish world,” Orel said in the news release. “Without opportunities earlier in our lives, so many of us want our children and ourselves to learn everything we can.”

As part of this RSJ engagement, PJ Library in South Palm Beach County will host an event with Soviet-born, acclaimed author Boris Fishman at 7:30 p.m. on Sept. 24 at the Jewish Federation of South Palm Beach County, 9901 Donna Klein Blvd. in Boca Raton. Fishman will speak about his book “Savage Feast/A Memoir with Recipes,” which explores the challenges of navigating two cultures from an unusual angle. The night will also feature wine, cheese and special delicacies from the book, with dietary laws observed. The cost is $18, and reservations are required at jewishboca.org/author.

A local Russian Jew, Yakov Grinshpun of Boca Raton, who moved to South Florida on Sept. 6, 1989 after emigrating from the then Soviet Union, is grateful for South Florida Jewish organizations who helped him out following his arrival. Grinshpun, 75, is especially thankful for the Jewish Federation of Broward County for helping him out in his early years here. “I’m very grateful for their [Federation’s] help. At the beginning it was tough, and when I lost my first job in a few months, they helped me to find a job in a synagogue, which was Temple Bat Yam in Fort Lauderdale.”

Grinshpun is the author of the book “Selling is Persuading: How to Sell Your Products, Ideas, and Skills” and is working on his memoirs. Although he said he’s trying to be more American than Russian, he enjoyed attending a picnic in Boca Raton last year for South Florida Russians. This picnic, which Grinshpun said was attended by many Russian Jews, was organized by his son-in-law, Alexander Braverman of Boca Raton, who organizes these types of events for the local Russian community. Braverman, who is also Jewish, left the Ukraine, which was then part of the the Soviet Union, in 1989 and came to the United States in 1990. Aside from these picnics, he has also been involved in organizing Russian Heritage Night events at Florida Panthers hockey games.

Braverman explained his inspiration for planning these Russian events in South Florida. "I grew up in the Soviet Union, and as it was one big country at that point, Russian heritage and Russian culture was part of me and still part of me. I was always involved with the Russian community."