Our Common Destiny: The ties that bind Israel and the Diaspora 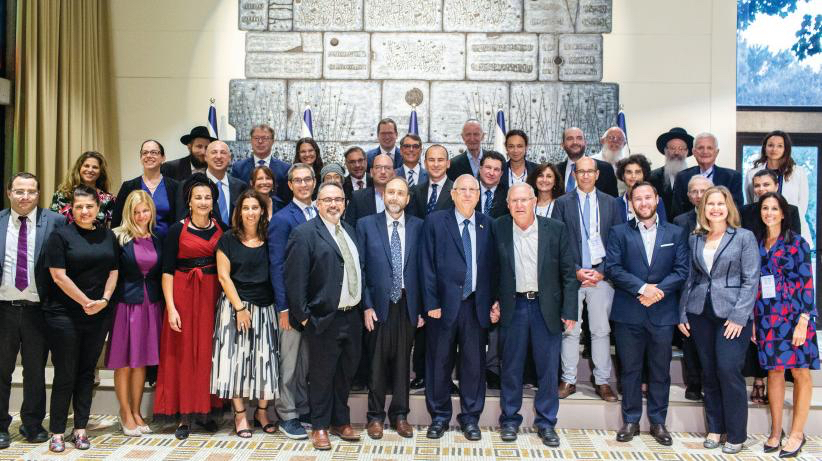 “Many people are deeply concerned that the challenges with which our people are wrestling today are leading to greater friction and division than ever before.”

One of the most hotly debated topics among observers of contemporary Jewish life is the current state of Israel-Diaspora relations. While a recent study suggests the connection remains strong, others are not convinced. Where they once saw little daylight between how Diaspora and Israeli Jews stood on a range of issues, they now believe that differences of opinion and perspective are now much more complex and pronounced.

“While the relationship between the Jews living in Israel and Jews residing in the rest of the world has survived several rough spots,” says Sanford R. Cardin, chief executive officer of Our Common Destiny, “many people are deeply concerned that the challenges with which our people are wrestling today are leading to greater friction and division than ever before.”

In an effort to bridge the gap between Israeli and global Jewry, the Genesis Philanthropy Group (GPG) and the State of Israel – under the auspices of President Reuven Rivlin – have teamed up to create Our Common Destiny, a project that is bringing a new and innovative approach to the issue of Jewish unity.

For GPG, a global family of foundations that has long worked to strengthen the bonds and common understanding between Jews living in Israel and throughout the Diaspora, launching Our Common Destiny is a natural extension of its philanthropic agenda. Mikhail Fridman, who co-founded GPG, passionately believes the future of global Jewry depends on its ability to embrace its shared values, with Israel at the center and all Jews helping shape their common destiny. Fridman wants the Jewish people to focus more on what connects them rather than on what separates them.

“Divisions between and among Jews generate too much attention, at the cost of Jewish unity,” said Ilia Salita, president and CEO of GPG. “All too often, conversations focus on our differences, the things that distinguish one Jew from another – whether it is geography, religious beliefs, behavior or otherwise–  instead of those that link us.”
That is why the mission of Our Common Destiny is to spark a new, positive discussion among the Jews of the world about what they share and, according to Cardin, “to seek public participation in the drafting of a restatement of the values and principles that unite and bind the Jewish people.” The hope is that engaging global Jewry in the effort to craft such a document will strengthen “the ties that bind us,” he continued.

Creating such a document is no easy task, given the diversity of beliefs, thoughts, and opinions that exist in the Jewish community. In order to overcome this difficulty, GPG assembled a team of more than 30 prominent Jewish scholars, thinkers and activists from around the world, representing many diverse and different points of view, to comment on a proposed declaration of common Jewish principles. The scholars came together in Jerusalem in September 2019, to review and discuss the initial draft of the Declaration of Our Common Destiny, after which they presented it to Rivlin for his consideration.

“When President Rivlin embraced the Declaration,” says Cardin, “he challenged Our Common Destiny to engage as many Jews as possible from all over the world in a conversation about the document before bringing it back to him for signature by the end of 2020.”

Interestingly, parts of the document presented to Rivlin were deliberately left blank so as to allow Jews from all over the world to “crowdsource”’ its completion and ensure it receives a wide range of input. Crowdsourcing is an approach in which information and ideas are obtained online, via social media, online forums and other digital communication from large numbers of people.

While other initiatives have tried to connect the Jewish people, Our Common Destiny is the first to employ crowdsourcing to accomplish this goal. ”Crowdsourcing will enable the largest number of people possible to vote on questions related to the completion of the Declaration,” Salita said, ”and using the latest technology to crowdsource will allow us to reach them within the time frame President Rivlin has set for us.”

Dr. Lior Zoref, an expert on crowdsourcing and the member of the initiative’s advisory board, agrees. “The decision by Our Common Destiny to use crowdsourcing as the vehicle to engage as many voices as possible in the initiative is a bold and important effort to unite our people and use our collective intelligence for a better future.”

What no one could have predicted when Our Common Destiny launched was the COVID-19 pandemic. Ironically, at a time when nations worldwide are undertaking social distancing to “flatten the curve” of new cases and slow the virus’s spread, the ability to crowdsource the declaration online highlights how this initiative can connect Jews worldwide across even the most challenging divides.

The crowdsourcing will focus on providing people with the opportunity to examine the five core principles and rank them according to their personal relevance. The process will also invite them to think about what the practical implementation of the principles could mean in the future; at the end of each principle, people will be asked to share their sense of dreams of the how the world will look when that principle is realized.

Take part in the survey at http://surveys.ourcommondestiny.org/s3

GPG and Our Common Destiny are also exploring ways in which people can engage with the document in ways not directly tied to the text. “We hope to make engaging with the declaration as interesting, fun and interactive as possible, without diminishing its meaning and importance,” Cardin says.

The Declaration details the goals as follows: “We, the Jewish People, descendants of Abraham and Sarah, together with all of those who have converted to Judaism throughout the generations, have come together to declare a renewed covenant and shared vision for our common destiny.”

After recounting the history of the Jewish people in a few brief paragraphs, the Declaration outlines the key shared principles of responsibility and action:

CARDIN IS optimistic that many Jewish organizations and religious institutions will encourage all of their stakeholders to participate in the effort to complete the Declaration. “We hope to partner with as many groups as possible because we believe that the conversation that we are trying to spark is relevant to every Jew and every Jewish organization in the world.”

Rachel Gerrol, Our Common Destiny Scholar (North America), adds that “I applaud the decision of Our Common Destiny to reach beyond the ‘usual suspects’ and encourage the participation of all Jews – regardless of their age, upbringing, residence – in shaping the future of the Jewish people.”

It remains especially important that teens, “who are the future of the Jewish people,” read and comment on the Declaration, Cardin adds. “We want to engage the most diverse Jewish population possible.”

The current version of the document is written in Hebrew and English, but will eventually be translated into Russian, French, and Spanish to reach an even wider Jewish audience.

Our Common Destiny aims to use social media and other channels to connect as broadly as possible with Jews worldwide. “In many cases, people are unaffiliated not because they are disinterested, but because they have other priorities. We’re hoping to make it clear that engagement with this process does not have to take a lot of time,” Cardin says. “You can just take a look at some basic principles and explain how you relate to them. It can be a quick and meaningful engagement.”

Cardin, whose initial involvement in the project was as chair of the advisory board for the September 2019 forum in Israel before becoming CEO, says that while the document is important, Our Common Destiny’s larger goal remains to stimulate a serious, broad-based global dialogue.

“We want to engage and excite large numbers of the Jewish people in a conversation about being part of our people, and the role that they have in the Jewish future.”

But can Our Common Destiny address the challenges facing the Jewish people?

“There is no silver bullet in terms of achieving Jewish unity and connection,” Cardin says, “but the mission of Our Common Destiny is an important first step.“

Virtually every Jewish organization Our Common Destiny has approached to date has offered strong support, and Cardin hopes that solidarity will provide a greater sense of unity and connection throughout the global Jewish community as well.

One such endorsement came from the former UK chief rabbi, Lord Jonathan Sacks. “Throughout history, Jews have been a people of faith, not fate alone. Jews are choosers, not victims; co-authors of their destiny, not swept by the winds of circumstance. In an increasingly complex age, we need to reaffirm our commitment to the Jewish vision, strengthen the connections between Israel and the Diaspora, and continue to be a positive light in the world. That is the mission of Our Common Destiny and why it is so important,” Sacks wrote.

Rabbi Silvina Chemen, an Our Common Destiny Scholar from Argentina, captured the essence of the initiative. “Our Common Destiny opened a door to allow all of us to enter the path. A path that is built with our steps. We have a history, we have a memory, and now I feel we have a future.”

Our Common Destiny is planning on completing the declaration with the assistance and participation of Jews around the world and presenting it to Rivlin by the end of 2020.

More information can be obtained at http://ourcommondestiny.org/.