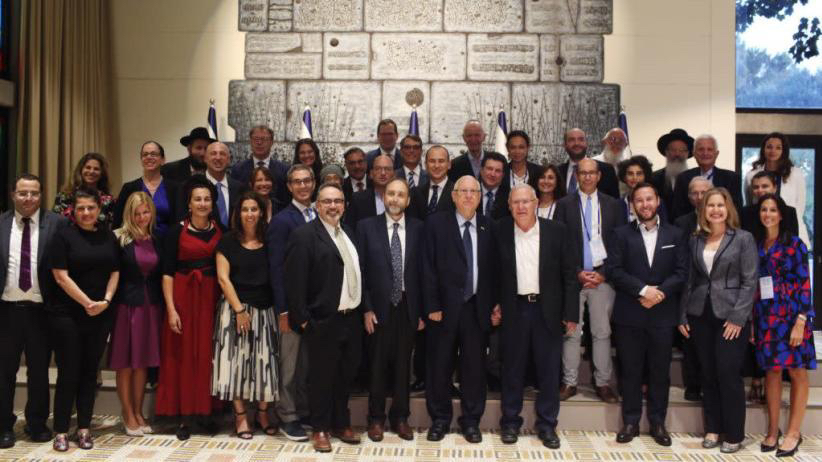 The mission of Our Common Destiny is to help Jews from all over the world work together to develop a shared set of ethics, values and principles.

Our Common Destiny – the groundbreaking global initiative founded by Genesis Philanthropy Group (GPG) and the State of Israel, under the auspices of Israel’s President – announced that it has formally launched the crowdsourcing phase of its effort to strengthen the bonds among Jews worldwide. Mr. Sandy Cardin will serve as CEO of the project, and Mr. Gennady (“Gena”) Gazin, currently the Chairman of GPG, will add the role of the Chair of the Advisory Board of the initiative to his responsibilities, a position initially held by Mr. Cardin.

The mission of Our Common Destiny is to help Jews from all over the world work together to develop a shared set of ethics, values and principles that will shape how the Jewish people relate, empower, and engage with one another across spiritual and cultural identities now and for generations to come.

During the first phase of the project, Our Common Destiny presented H.E. The President of the State of Israel, Mr. Reuven (Ruvi) Rivlin with an initial draft of the Declaration of Our Common Destiny containing a proposed set of ethics, values and principles, a document developed and reviewed by more than 30 world-renown scholars and activists from six continents representing a broad and diverse range of Jewish perspectives.

During a ceremony at the President’s House on 10 September 2019, President Rivlin endorsed the initiative and its plan to engage global Jewry in discussing and finalizing the Declaration. The President called on Jews of all ages, affiliations and nationalities to participate in the crowdsourcing of the completion of the Declaration by debating and shaping its final form, so it can truly represent the rich gamut of Jewish opinions. “If we sincerely embrace our diversity while cherishing our shared history, then this Declaration can serve as a roadmap for the future of the Jewish people,” the President said.

“On behalf of all of the stakeholders of Our Common Destiny, we are thrilled to be embarking on this important stage of the project,” said Sandy Cardin. “We look forward to encouraging and facilitating an open discussion of the ideas and principles contained in the initial draft of the Declaration, and we hope all Jewish leaders, thinkers, activists and influencers will join us in this aspirational effort to unite global Jewry and strengthen ties to Israel.”

“Genesis Philanthropy Group welcomes Sandy’s contributions and commitment to the success of Our Common Destiny”, added Ilia Salita, GPG President and CEO. “His exceptional track record of leadership and unparalleled experience in working with Jewish communities around the world will be great assets as he guides this initiative into its second, global phase, with the clear aim of engaging the whole Jewish world.”

Over the course of the next 12 months, Our Common Destiny plans to reach as many individuals as possible by partnering with a wide range of Jewish groups, organizing its own events, using social media and employing the best of crowdsourcing technologies.

“The future of our people, the state of our union, the survival of our identity and our legacy are at stake. Israel and the Diaspora must renew our bonds, and the terms of our mutual engagement. The Jewish world must be reunited. In my new position as the Chair of the Advisory Board of Our Common Destiny, I look forward to the opportunity to help create shared, inspired vision for our collective future,” said Gennady Gazin.

To learn more about Our Common Destiny and see the full list of thought leaders and advisory board members involved in the project, please visit www.ourcommondestiny.org