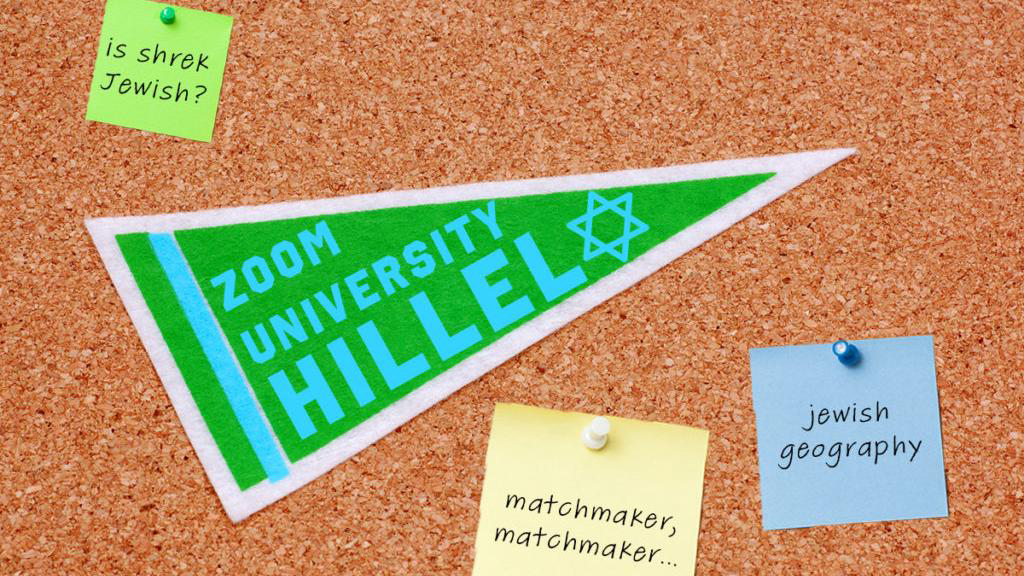 At Zoom University Hillel, there are no comfy places to study or free snacks.

There’s no director or rabbinic intern or student board. But there are memes, words of comfort and a sense of community as strong as any university’s Hillel house.

The COVID-19 pandemic has forced nearly every college to transition to online courses and, in most cases, move students out of their dorms and back to their homes. College students naturally have taken to Facebook meme groups to cope with the sudden lifestyle change.

The Zoom University Hillel Facebook group, which was founded by Clark University student Ari Hoffman, stemmed from a larger group with over 200,000 members called Zoom Memes for Self Quaranteens.

Hoffman posted in the original group, jokingly asking, “So who wants to join Zoom University Hillel?” When people expressed interest, Hoffman created the group. Within four days, the group had over 8,000 members.

Hoffman said he didn’t expect the group to grow so quickly.

In the group are memes, polls, Zoom hangouts, matchmaking and, of course, Jewish geography.

Tyler Bardfeld, a sophomore at the University of Delaware, posted in the group looking to unravel the “largest conceivable game of Jewish Geography.” Within 18 hours, the post had over 2,000 comments of students clicking on people’s names to see how many mutual friends they have.

“I thought it was interesting how there were all these people that I recognized from summer camp and when I was in BBYO and people from school … I didn’t think it would get as many comments as it did, but it was fun,” Bardfeld said.

Adina Ornstein-Luks, a student at Vassar College, shared a similar experience of joining the group and immediately seeing people she knew from summer camp, college and home all in the same place.

“I was like, ‘This is crazy. This is the intersection of all of the Jews I’ve ever known all in one place!’” Ornstein-Luks said. “I really got a kick out of it. I was looking through and I had mutual friends with everyone.”

Like many Jewish gatherings, humor plays a huge role in the group. A poll questioning whether or not Shrek is Jewish (Shrek means fear in Yiddish) sparked vigorous debate. Sophie Frieden, a student at DePaul University (and Alma ambassador) started a thread of bar/bat mitzvah pictures and glow-ups.

“The humor is good. We’re able to make fun of each other, but in a lighthearted way. There’s good banter,” said Sofia Freudenstein, a student at the University of Toronto.

Occasionally a political debate breaks out, but the group mostly remains civil and drama-free, something that can be rare for online Jewish spaces. Especially rare among a group of college students, there has been almost no discourse surrounding the Israeli-Palestinian conflict.

Members are using the larger group to find smaller pockets of community, with call-out posts such as “Where are my Russian-speaking Jews at,” “Where are my trans Jews at?” and “Where are all my Latino Jews?”

Freudenstein said she loves how everyone is finding their niches in the group.

“For me, it was finding all the other Canadians,” she said.

Ornstein-Luks posted looking for other queer Jews and got a lot of responses right away — prompting her to create a spinoff group called Zoom University Hillel (but queer) with Jacob Miller, a fellow Vassar student. She said this smaller subgroup has been the best part of the experience for her because it’s allowed her to connect one on one with people and serve as a self-described “queer yenta.”

Numerous group chats on Facebook Messenger, Slack, Snapchat and What’s App have started from the group. People are using the group to find friends, something New York University freshman Nina Robins said she thinks is unique.

“You don’t necessarily see social media as a place to make more friends … but I think people in this group are really down to meet new people and I think that’s cool,” Robins said.

Hoffman said it’s nice to have people to talk to during all this isolation.

“Just having a little group that’s smaller than that bigger group but still a good amount of people to talk with [is really nice],” Hoffman said.

As one would expect in a group of over 8,000 young Jews, there is plenty of matchmaking. Multiple matchmaking Google forms have emerged, promising to find applicants their true love/bashert through a blind Zoom date.

Aaron Raimi, a college student in San Diego, took the matchmaking to a new level by creating the spinoff group Zoom University MeetJew – Find your #CoronaCutie, which gained nearly 3,000 members in a matter of days.

“I was thinking, ‘Why doesn’t someone create a page that revolves around dating?’ … I thought it could be something fun, so I posted on the [Zoom University] Hillel page saying, ‘So, am I gonna be the one who has to create this Jswipe/dating/shidduch Zoom University page?’ I got a bunch of reactions,” Raimi said. “I was like, ‘You know what, everyone’s quarantined, I have a lot of time on my hands, I’ll just make this and see what happens.”

While Zoom University Hillel is created and run by students, there are also online programs from Jewish college professionals. Hillel International recently launched Hillel@Home, a series of virtual events with speakers, and many college Hillels have created their own virtual programs.

In a time of fear and uncertainty, these Facebook groups are bringing students together and providing a sense of community.

“This would have never happened if we weren’t in this situation, which is why I’m really trying to see this as a positive,” Ornstein-Luks said. “This group is truly iconic. I think it’s so funny and so powerful.”

Multiple students have posted in the group expressing their gratitude for the community.

Mason Brown, a University of Minnesota student, posted his appreciation, saying “It’s amazing that during something as serious as a global pandemic, we’re so willing to come together (albeit virtually). I hope everyone is doing well, and staying safe and healthy. I can’t wait to meet more of you and make connections over the next hectic few weeks or so, but I hope this group continues even beyond that.”

Freudenstein said the group has given her a sense of unity that she didn’t expect.

“It’s not just my Hillel that I’d be comfortable in, but no matter what campus I’d go to, Hillel would try to make me feel comfortable,” she said. “That’s a really nice feeling.”