One Year After Halle Attack,Young Jewish Berliners Gather to Show Resilience and Hope 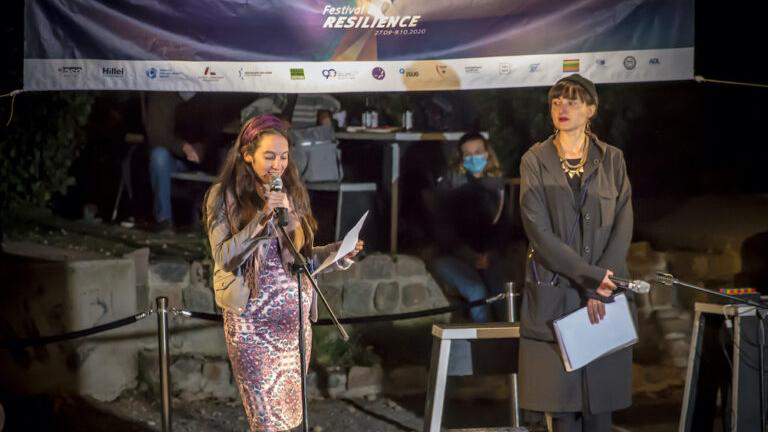 One year after a gunman attempted to storm the Halle Synagogue and killed two people...

some of the young Jewish Berliners who were among the intended victims and others gathered Oct. 6 for a “Ceremony of Resilience” to inspire communal healing and build a strong vision for the future.

The event, part of a “Festival of Resilience” spanning the Jewish holidays of Yom Kippur through Sukkot, is supported by Genesis Philanthropy Group and Hillel Deutschland, with the Central Council of Jews in Germany, the Alfred Landecker Foundation, and the Amadeu Antonio Stiftung.

Some 150 people gathered at the BRLO beer garden in Gleisdereick Park, in an event that Hillel Deutschland Director Rabbi Rebecca Blady said was designed to not only commemorate the Halle attack, but to move ahead positively by focusing on how the current generation of Jews in Germany can build a strong community together despite ongoing challenges, in solidarity with other German communities targeted by extreme-right-wing violence.

“The past year has involved a deep healing process for many of us – and for many of us, that process is not over. Even as we come together and support each other, we also want to make the statement that trauma does not define who we are as a people,” said Rabbi Blady

The Berlin gathering integrated and celebrated the customs of the Sukkot holiday.

“Sukkot is the ultimate holiday of resilience,” Rabbi Blady added.

Reflecting that theme, the event also included speakers and performers from across Germany who survived other terror attacks, including Anetta Kahane, chairwoman of the Amadeu Antonio Foundation, and Faruk Arslan, who lost his family in the 1992 neo-Nazi firebombing of a home of Turkish migrants in Mölln.

Other featured speakers were Dr. Andreas Eberhardt, CEO of the Alfred Landecker Foundation; Daniel Botmann, Managing Director of the Central Council of Jews in Germany; Ruben Gerczikow and Noa Luft, student leaders of the Jewish Student Union Deutschland, a close partner of Hillel; Newroz Duman of the Initiative February 19, Hanau.