Novelist and filmmaker discuss Jewish identity at JW3 in London 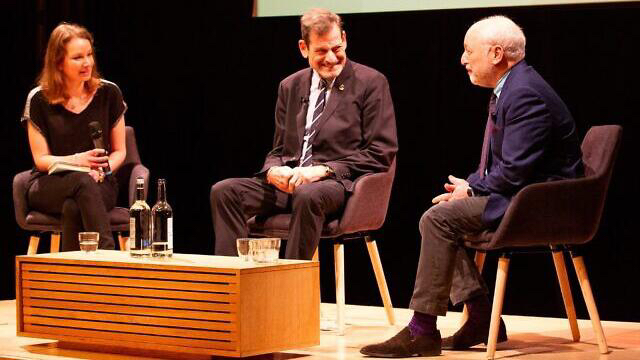 Event is the second in a series exploring the experiences of well-known Jewish figures and how they influenced their Jewish identity.

A novelist and filmmaker took to the JW3 stage last week to talk about the experiences that added to their Jewish identity, with one revealing that their first taste of antisemitism came in Hollywood.

The event was the second of its kind, in a series titled ‘Global Jewish Conversations,’ which last week included acclaimed author André Aciman alongside producer and motion picture executive Howard Rosenman.

Aciman grew up in Alexandria, Egypt, and said he “paid a price for being Jewish, as most people do,” adding: “Egypt was rabidly antisemitic. I felt antisemitism every single day at school. It has an effect on who you become.”

He later lived in Rome and described the experience of Diaspora communities as living as “Jews of discretion”.

In contrast, Rosenman discussed how his own identity was inspired by the archetype of the “new Jew” that emerged in and near New York, alongside the birth of modern day Israel, which he said was “the single most important thing to me”.

A volunteer medic during the Six Day War, he enjoyed a chance encounter with maestro Leonard Bernstein in Jerusalem, which would spark his move out of the world of medicine and into the world of movies. He said Bernstein told him: “You’ll never bow to the mistress of science.”

The London audience for last week’s event, sponsored by Genesis Philanthropy Group (GPG), heard Rosenman explain how he had experienced anti-Israel attitudes exhibited towards Jews in Hollywood, including from fellow Jews.

“The only time I’ve ever felt antisemitism was in Hollywood”, he said. “In Hollywood, they conflate the Netanyahu Government with Israel, so they hate anything that has to do with Israel.”

JW3 chief executive Raymond Simonson said Aciman and Rosenman were “giants in the world of the arts,” adding that he was pleased to hear them discuss “the influence of Judaism on their work and the wider issues Jews across the Diaspora are facing today”.