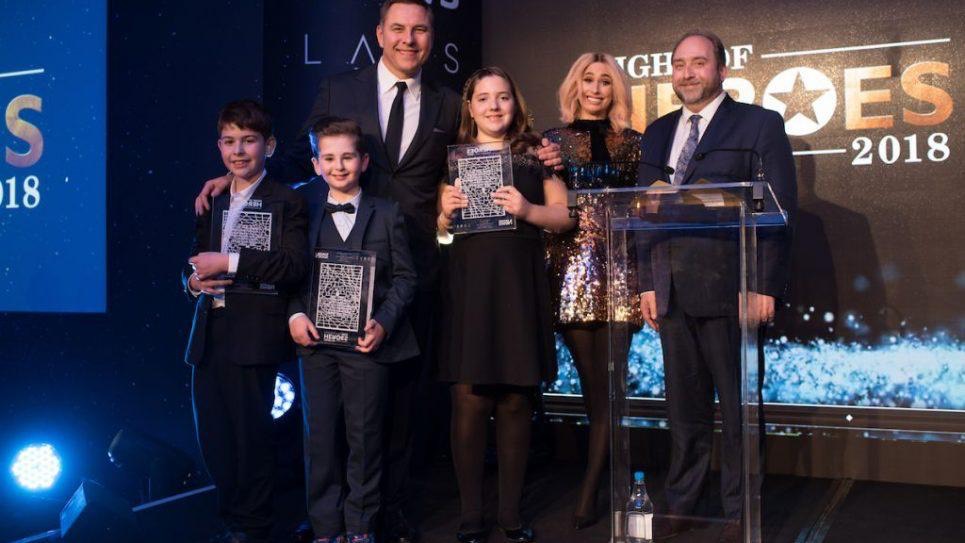 So many of the emotional highs of the Night of Heroes were about children.

But the category of Young Hero Award melted hearts everywhere, as stories of triumph over adversity were played out to an audience where tears and happiness were the order of the day.

The three finalists chosen for the Young Hero Award, sponsored by the Genesis Philanthropy Group, are aged 11, nine and nine respectively. But young as they are, they have overcome huge difficulties in their young lives and proved an inspiration for the adults in the room.

Most striking was the instinct of all the finalists to think of other people, despite their own problems — illustrated sweetly by Rio Woolf, aged nine, who used his winner’s podium moment to congratulate his fellow finalists.

Lucy Ronson Allalouf was born with a rare brain tumour and has undergone numerous life-threatening operations in her 11 short years. But she has the sunniest of dispositions and despite seizures, endocrine imbalance, daily medication and all too much time spent in hospitals, Lucy manages to be positive.

The Immanuel College pupil paints giant canvases for Camp Simcha, which she sells to raise money for disabled children. Each canvas contains an encouraging word such as “bravery, strength, and hope”, says Lucy, who sells the paintings to help Great Ormond Street Hospital buy equipment so that other children can receive the same treatment as her.

And she sings in the Rays of Sunshine children’s choir, made up of children with a range of disabling conditions. “When I sing I can forget about my seizures, about when I’m in hospital. I love it”, she says.

If Spencer Cohen’s smile on the Night of Heroes had been any wider, it would have meant a re-definition of the word “kvell”. Spencer was rightly bursting with pride at the nomination of his son Zak, now nine, whose mother Kay died of cancer two years ago and in whose name he has raised money to help cancer research.

Zak, who attends Wohl Ilford Jewish Primary School, first learned his mother was ill when he was only five. The family (Zak has a sister, Mia), took every opportunity to capture on video and stills Kay’s last years, and that has been the inspiration for Zak’s next project, a charity he wants to call Kay’s Memory Album. It aims to help children with parents who have terminal illnesses, so that they can preserve their memories for the future.

For now, however, Zak has been ferociously fundraising. So far he has staged a charity fun run in Chigwell Park, “Pawfect in the Park”, where everyone was encouraged to bring their dogs, and he’s also sold homemade cupcakes — though he admitted he hadn’t made them himself. Still, he said cheerfully, they had been made in someone’s home, hadn’t they?

To date Zak, who is an ambassador for the grief counselling service Grief Encounter, has raised £2,500 in memory of his mother, whose 40th birthday would have been this week. As for his ambition, he made that clear in his accompanying film for the night — “Zak Cohen, future prime minister”.

Rio Woolf is also nine and he — quite literally — had a different hurdle to overcome. Rio was born with a rare bone deficiency in his right leg which meant it had to be amputated. But the sports-mad Bushey school student has worn a series of increasingly sophisticated prostheses, including a junior blade of the type worn by his own hero, the Paralympic athlete and Strictly Come Dancing competitor, Jonnie Peacock.

The two first met as Peacock triumphed at the 2012 Paralympic Games in London, and now Rio wants to emulate his Paralympic gold medal mentor. Peacock has no doubt that Rio can do it. “He’s really sporty and I always tell him just to enjoy it”, he says. As for Rio, “I have lots of dreams. I want to be a Paralympian like Jonnie. I think my dreams can come true.”

Presenter for the award, reality show star Stacey Solomon, had to hold back the tears after the stories of the three finalists were recounted. But the room erupted in cheers when she announced that all three of them were winners and would all receive prizes. Lucy, Zak and Rio were surrounded by their families and applauded to the rafters — a fitting conclusion for three small heroes.