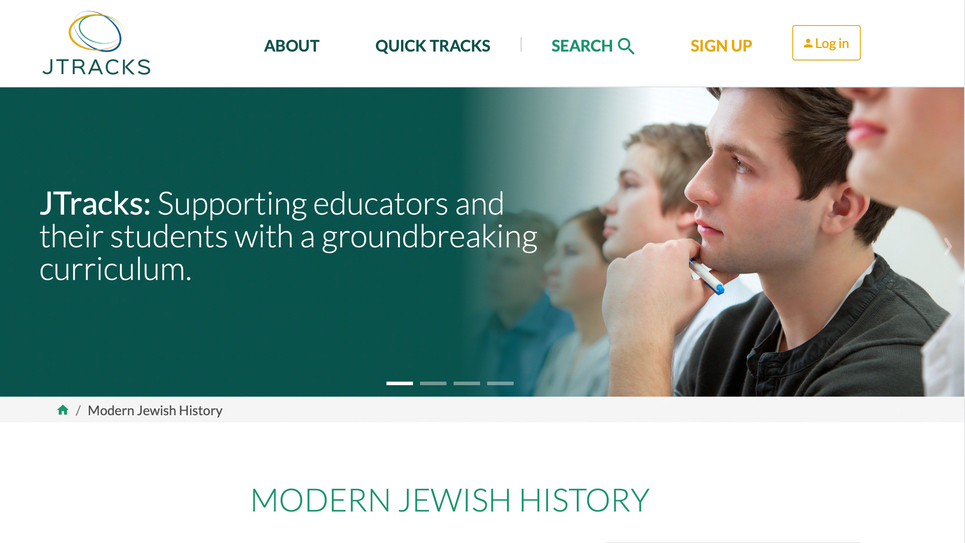 From the Enlightenment to the birth of the Jewish state, the JTracks curriculum will give children a better foundation of knowledge.

It may be unconventiional start teaching a Jewish studies class to the strains of Neil Diamond. But a video featuring his song Coming to America introduces a unit on immigration to the USA that forms part of a new Jewish history curriculum being rolled out in Jewish secondary schools.

The year-long course intended for year 8 is the first to be completed of a new set of curricula which has been produced by PaJeS, called JTracks; some modules are also available in Israel studies for year 9 as well as in an ethics programme for year 12.

Published online, it marks a significant development in resources for Jewish schools, filling a recognised gap within Jewish studies.

Five years ago, the incoming chairman of the Jewish Leadership Council, Jonathan Goldstein, expressed concern at the lack of knowledge of, in particular, Israeli history that he encountered among Jewish schoolchildren.

While Israel often featured in  informal education programming in schools, children did not always systematically study the origins of Zionism or the formative events in the early years of the young Jewish state.

They may have been taught about the Romans’ Destruction of the Temple but little about what happened after.

The JTracks modern history curriculum consists of 10 modules, with 26 lessons in all. The first module offers a broad sweep from “exile to emancipation” allowing a brief catch-up on the Middle Ages before a more detailed exploration of the modern period.

Since general history is taught throughout the use of primary sources, explained JTracks director Sharon Radley, “it was very important that Jewish history was taught in the same way on a par with what students are getting in their secular history lessons.

“I wanted them to see the sources and not just have a teacher standing in front of the classroom talking.”

So she turned to the National Library of Israel because “they are the ones who have  permission to give us these primary sources. We worked with them to write the curriuculum and the sources are free to use, something I’m really proud of because most curricula you have to pay for.”

Sources include not only official documents but a variety of materialsuch as extracts from diaries, photographs, newspaper articles, adverts in Yiddish.

In the lesson on the Balfour Declaration, children are given copies of the government’s famous letter to Lord Rothschild but not told what it is. They have to try to decipher its content and figure out what it might be. “That’s very much the National Library of Israel methodology,” Ms Radley said.

That investigative exercise makes learning more exciting than being simply doled out facts. As part of the lesson, children are presented with a set of figures from the time along with quotations of reactions to the Balfour Declaration, which they have to match to the right person — a test of their understanding of what they have been learning.

Every lesson comes with a detailed guide for teachers: a PowerPoint presentation, resources to download and hand out, classroom activities and questions for children to reflect on at the end that aims to connect them more personally to the material — for example which historic figure in the lesson would they like to have met and what would they have asked him or her.

But the watchword is flexibility. The curriculum enables a teacher to prepare a lesson the night before — “We have been very prescriptive for those who need it”. Alternatively, “if you have got a teacher who knows this like the back of their hand, they can make it theirs.” Additional information for every module suggests other source material including videos, books and websites for those who might want to delve more deeply.

Nor does a school have to teach the whole course or even in year 8. JTracks is working with ten schools at the moment and some will be starting only in summer. And a synagogue could also decide to use it as the basis of a teenage programme. The collection of source material alone in one place is a valuable reference guide.

“We’re very much hoping to embed this in schools,” she said. “But because it’s a very different style of teaching — a lot of students getting up from their seats and moving around, and working in groups, we need to do as much training as possible… to make sure teachers are comfortable with it.”

In response to requests from schools, the curriculum includes units on Anglo-Jewish history so children will learn about key pieces of legislation that affected Jews in the country and meet figures ranging from the unfortunate royal physician Dr Roderigo Lopes, a “hidden Jew” in Elizabethan times, to Prime Minister Benjamin Disraeli. There’s a photo of Boris Johnson visiting one historic Anglo-Jewish institution, Grodzinski’s Bakery.

The first of three planned modules on Israel studies is also ready, which mainly covers the different waves of immigration up to the 1980s and 1990s. It would have been complete by now had not Covid intervened and the writers of the course from Bar Ilan University in Israel been furloughed.

Two modules on “Ethical Dilemmas” have so far been created for sixthformers: on triage and artificial intelligence. “Sixthform teachers wanted these lessons, to get students to be able to develop their oratory skills and to understand there is a Jewish voice to contemporary ethical dilemmas and to listen to other people’s points of view,” she explained. It’s good preparation for university but will also help students ahead of the inter- school debate PaJeS is staging later this summer.