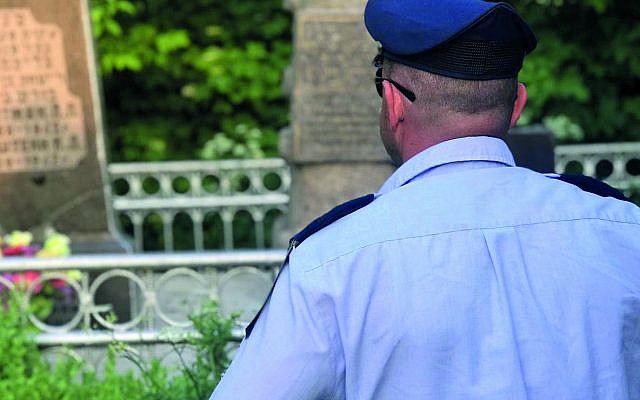 Mahut programme which was launched in 2010 brings top officers from Russian-speaking communities, with the intention of linking them to their heritage and culture.

More than 40 Israeli serving officers have been taking part in a unique week-long programme in Ukraine, as part of the Mahut Project.

Mahut, now in its ninth year, was launched in 2010 in partnership between Genesis Philanthropy Group, the IDF Education and Youth Corps and the American Friends of the IDF.

It’s aimed at bringing senior IDF officers from all branches of service to Russian-speaking communities, with the intention of linking them to their heritage and culture.

Previous delegations have visited Lithuania and Latvia and have learned about Jewish history in the Baltic region. This year, the group visited Ukraine, specifically to places which have become important in Jewish history. Commemoration ceremonies for victims of the Holocaust took place at extermination sites, but there were also opportunities to meet members of present-day Ukrainian Jewish communities.

Mahut is often described as a life-changing experience for the participants. The aim is to strengthen the Israeli and Jewish identity of IDF officers and NCOs and to develop and enhance the bonds between IDF commanders and the Jewish people.

When the officers return from the FSU they either join, or create, various projects to encourage new immigrants and their children, as well as populations with special needs, to embrace meaningful service in the IDF.

Lt-Col Mika Goldstein, who is responsible for the delegation on behalf of the IDF, said: “Mahut is a mission that the Education and Youth Corps sends out as part of the educational and values training programme, which focuses on Israeli-Jewish identity and cultural competence. This is a journey of learning — intellectual, academic and emotional. The officers who took part in Mahut missions over the years testify that the programme provided them with the opportunity to learn, examine and shape their identity as commanders in the IDF”.

Natalie Shnaiderman, director of global grantmaking for the Genesis Philanthropy Group, said: “We believe that direct contact with Jewish history and Jewish communities in the diaspora is an important tool in building the Jewish identity of the younger generation of Russian-speaking Jews in Israel, and we are proud of our partnership with the IDF in this unique project”.

Ignoring Jewish poverty is a sin we can’t afford
Forward