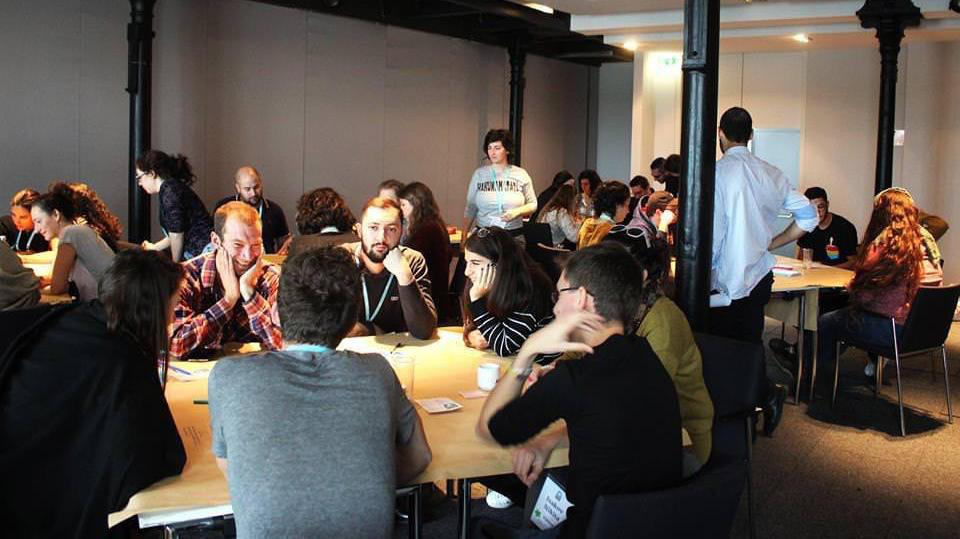 It starts like a joke, or perhaps a text from the haggadah…

A Russian, a Czech, an American, two British, an Uruguayan, an Argentinian and a French were sitting in the countryside, in the outskirts of Paris. The whole morning, they were discussing attributes of Jewish learning at Moishe House, until one of the colleagues said to them “my friends, we should write that and share it with the world!”

Over the past years, Moishe House has become the global leader in peer-led Jewish young adult engagement. Every year, thousands of young Jews experience innovative, engaging, exciting Jewish programming. Aside from Staff-Led Retreats, where young adults receive trainings from experts in the field, all programming is planned and executed by their peers. This creates countless opportunities for young adults to connect with their own Jewish identities, their friends and their wider communities.

In practice, there are more than 100 Moishe Houses in over 25 countries around the world. We have also initiated a number of other programs, Moishe House Without Walls (MHWOW), Retreatology, Peer-Led Retreats, 4HQ, Open Dor Project and hopefully many more to come.

Time and again, residents and community members tell me Moishe House is a space of Jewish first times for them: first time engaging in conversations with like-minded Jews, first time putting together a Shabbat dinner or Passover Seder, first time learning text from a peer, or on the contrary from a Rabbi that sits with them in their living room, first time feeling moved to donate money to a Jewish organization. For a variety of reasons, those people often float under the radar of anything Jewish happening in their city. Moishe House provides new offerings for a pre-existing demand. But for some people, by creating new Jewish offerings, Moishe House in turn inspires a host of new Jewish demands from them. I think this is especially acute outside of America, and it is possibly what personally moves me the most (disclaimer: I was born and raised French). When a Moishe House opens in cities like Budapest, Barcelona, Paris or Sofia, together with it emerges the possibility for young people to be actively and intentionally involved in their communities in a way that works for them.

One of the things that Moishe House might be instrumental in is bringing Jewish, text-based learning, to those people. Thanks to my colleagues’ nudge, here are the main attributes of Jewish learning I’ve identified at Moishe House:

I then asked all my colleagues what their priorities were among those ten attributes, i.e. on which ones they thought we were making the most significant difference and how each of them, in their respective jobs were contributing to it. The answers were varied, but the attribute that each of us kept was peer-led learning. All of us felt we had personally made the experience described by Rabbi Hanina: “I have learned much from my teachers and even more from my friends, but from my students I have learned more than from all of them.” (BT Taanit 7a).

So is Moishe House’s Jewish learning different from all the other Jewish learnings? Yes and no. No, because Moishe House has not invented concepts like hevruta (peer study), mahloket (constructive disagreement), community centers, tikkun olam (mending the world as per E. Fackenheim), learning retreats, etc. They might structure our approach and method, but by doing so, we are inscribing ourselves in Jewish traditions that span centuries and continents. But yes, our learning is different because of the people we put around the table, both as learners and teachers. We take the same ingredients and bring them to new cooks. In a variety of ways, Moishe House dramatically opens the gates not only of Jewish learning, but, perhaps more importantly, of Jewish teaching. For most of history, Jewish education has had a pretty previsible face and voice.

Through House programs, MHWOW programs or Peer-Led Retreats, Moishe House enables an amazing variety of Jews to claim “This is what Jewish education/an educator looks like.”

Why is this particular way of doing Jewish learning critical for the young adults Moishe House works with? In the dozens of site visits I have made in the past months, conversations I had with residents and community members, I have met an amazing diversity of young Jewish adults. In their variety, they still share a complicated sense of engagement with their local community. They have either:

We acknowledge the fact that young adults don’t gather, engage, learn, share, connect, etc. in the ways previous generations did. By giving them the floor of (their) Jewish community, learning and teaching, Moishe House opens a new page for them. Of course, opening the floor comes with institutional risks for our organization: some might take this freedom to places we had not anticipated. But our approach is to see this democratization as an imperative for the future of global Judaism and possibly its single best opportunity to thrive.

Of course, there is a specific type of Jewish education that is a job, possibly gained through a degree. But I also think that Jewish education is radically democratic: it applies to all Jews, in its duties and rights. Anyone can learn and teach text, provided that they accept the efforts, responsibilities and empowerment that come with it. In Rabbi Yohanan’s words : “The crown of priesthood, Aaron merited to take. The crown of kingship David, merited to take. The crown of Torah is still in its place. All who want to take it, let them come and take” (BT Yoma 72b).

By Faustine Sigal, Moishe House’s International Director of Jewish Education since January 2017. She sits in Paris.