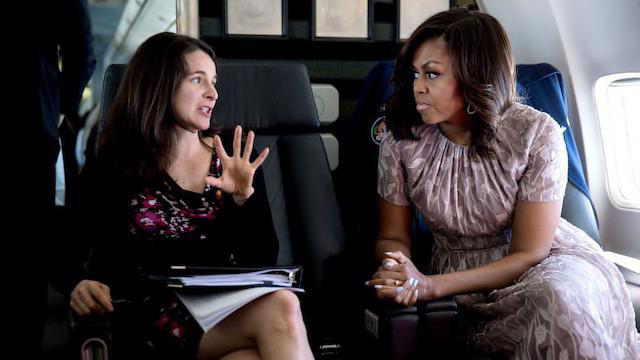 When White House staffer Sarah Hurwitz took a class in Judaism she didn't expect it to lead anywhere.

But nine years later she's written a book about her passion for Jewish learning. Following a break up, not many people’s response would be to sign up to an Introduction to Judaism class. But in 2011, at the age of 36, Sarah Hurwitz had ended a relationship and found herself with some spare time to fill and that is precisely what she did. Hurwitz, who spent six years as head speechwriter for First Lady, Michelle Obama, began the course at the Washington, DC Jewish Community Centre and what she discovered totally floored her.

“The whole sensibility of Judaism spoke to me — its intellectual rigor, its creativity and humanity, its emphasis on questioning and debate,” she writes in her book, Here All Along: Finding Meaning, Spirituality, and a Deeper Connection to Life - in Judaism (After Finally Choosing to Look There). This was not the uninspired, rote Judaism of her childhood, which she had chosen to detach from after her batmitzvah, but “something relevant, endlessly fascinating, and alive.”

The experience of that first class became a catalyst for further exploration: additional classes, Jewish meditation retreats, lectures, one-to-one study sessions with rabbis - of all denominations - and reading hundreds of books about Judaism. But that initial prompt to start learning was quite random, shetells me, speaking from her home in Washington DC. “I know it’s not very exciting, but it really was that simple,” she stresses. “What drew me in was these extraordinary texts which have so much wisdom about what it means to be human.”

Yet studying on her own, even in classes, proved to be difficult. “In Judaism, everything is hyperlinked to everything else. There’s no natural starting point. I remember thinking, I wish someone had written the book that I needed when I first starting learning — one that would give the deeper insights into Judaism but also cover the basics.”

A few of Hurwitz’s friends suggested she write the book she was looking for but, feeling unqualified to do so, she repeatedly refused. Eventually, Hurwitz was persuaded by her friend the writer Adam Grant and the result is Here All Along, a frank, engaging, intellectually rigorous and accessible book aimed at Jews and non-Jews. It explores Jewish ethics, values, history and traditions but Hurwitz also draws on her life experiences, providing some insight into how her reconnection with Judaism has challenged and influenced her.

“It didn’t change my approach to politics but it very much clarified my understanding of what I was doing in my political career,” she says. “[In particular], the idea that we are all created in the image of the Divine, which doesn’t require a belief in any kind of God but simply means — as Rabbi Yitz Greenberg so beautifully puts it — that we’re all infinitely worthy, we’re all equal to each other and we’re each fundamentally unique. Once I understood that as the core element of my idea of Judaism, I realised that I was actually expressing it in every speech I wrote.”

When Hurwitz finally told Michelle Obama about the book, she was thrilled, says Hurwitz. “She encouraged her staff to find jobs after the administration that were driven by passion and she was so excited for me. When the book came out, she sent the most beautiful tweet — it still makes me cry every time I read it. Both Obamas have been really supportive.” The tweet praised Hurwitz’s “big heart and kind soul.”

Hurwitz, who will be speaking in London next month as part of the Global Jewish Conversations series at JW3, is both humbled and delighted that her book has received positive responses from across the religious spectrum.

“People have said to me that they had no idea Judaism offered so much,” she says. “But what has moved me tremendously is that it’s not just disengaged Jews, I’ve gotten wonderful feedback from people who are deeply engaged, who’ve said I’m a kindred spirit. Even if they don’t agree with how I practice or with everything I write, I think they see that I share the same love, passion and commitment to Judaism.“Sometimes I think we make way too much of a big deal about denominational divisions and we have a lot more that unites than divides us.”

Hurwitz grew up in a secular home in Wayland, Massachusetts, where being Jewish was limited to attending synagogue on the High Holidays, Seder night and Chanukah parties. But for Hurwitz, it had lacked knowledge, meaning and relevance. When she decided to explore her Judaism, she says that, at first, family and friends were slightly sceptical. “There seems to be this impression that being a serious committed Jew means being very religious and I wanted to push back a little on that. I think they assumed that I was going to become very traditionally religious but once they realised I was going to pursue Judaism the way that I pursue everything — with a lot of questioning and with my intellectual mind intact, they were excited for me. And still are.”

Hurwitz was interested in politics from an early age. A graduate of Harvard College and Harvard Law School, she got a college internship in Vice President Al Gore’s speechwriting office in the White House which led to speechwriting on a couple of losing presidential campaigns, including as chief speechwriter for then Senator Hillary Clinton on her 2008 campaign for president. Soon after Clinton conceded the Democratic nomination to Barack Obama, Hurwitz received a call from the Obama team asking her to work for them.

“I was sad about Hillary but I also thought very highly of Obama so when I got the call, it was a very easy ‘yes,’” she says. Hurwitz then became a senior speechwriter for President Obama before serving as head speechwriter for Michelle Obama.

There were significant differences in writing for two of the most influential women in US politics, explains Hurwitz, due to their very different roles. “Writing for Hillary meant you had to think about her as a future commander-in-chief and that required writing a lot about policy, about the future of our country,” she says. “Whereas, the job of the first spouse is to figure out what added value they can bring, where their interests align with the national needs. With Mrs Obama, it could be more personal, more tailored to her, her voice could be more conversational.”Wherever they travelled together, Hurwitz was struck by the reaction to the First Lady, from people of all ages and backgrounds. “They appreciate her authenticity. They relate to her personally: as a mother figure, daughter, sister or friend. There’s a real sense of trust, respect and admiration for her.”

Hurwitz says that she approaches Judaism as a speechwriter, trying to find its beating heart for herself and others.

“Mrs Obama was always asking herself, what is the deepest, most important truth that I can tell at this particular moment,” she explains. “She was always looking to articulate that, and I think that’s one of the reasons why people responded so positively to her because she got up and said things that were true.” That sensibility is something that Hurwitz brings to her writing now. “If it isn’t quite hanging together, I just stop and ask, “Ok, what’s true here” and that often brings me to a deeper and more important point.”

In her book, Hurwitz writes that Jewish literacy is the ongoing and future defining challenge for Jews. She is keen to point out that she does not perceive intermarriage as a threat to Jewish continuity and instead, sees it as an opportunity and a challenge to welcome in “millions of more people to our Jewish family.”

The way to do this, she believes, is not to shame and shun them but to educate. “Show them the beauty of our traditions, our wisdom, our rituals, our holidays and share what we have to offer in the hope that they’ll join us, either by choosing to convert or by being devoted fellow travellers with us.”

She is adamant that it is not enough, “to feel vaguely Jewish, show up a couple of times a year in synagogue, send your kids to Hebrew school and hope for the best. That won’t keep Judaism going for generations from now,” she says. “We have to learn. We must know our traditions, know how to pass them onto the next generation and how to share them with our partners, whether they’re Jewish or not.”Hurwitz is grateful for having been a part of the Obama staff and admits that she has drawn on aspects of Judaism to try and make sense of the Trump era. “Judaism has a particular abhorrence for those who attack the vulnerable, for cruelty, for corruption and for lies. And so, the severe traits that define this President in this administration…” she says, speaking slowly before trailing off. “I think that…yup, I’ll just leave it at that.”

And what now for Hurwitz? Back to politics, a return to law? The rabbinate? “Definitely not law,” she says, laughing hard. “And becoming a rabbi isn’t the calling for me. At the moment, I’m promoting my book and I’m also trying to find time to get back into Jewish learning and studying as I miss it when I’m travelling. That’s the amazing thing about Judaism: you can spend a million lifetimes learning about it and you still just scratch the surface.”

Sarah Hurwitz will be speaking on March 17 at JW3 in London, as part of the Genesis Philanthropy Group's Global Jewish Conversations series.

‘Here All Along: Finding Meaning, Spirituality, and a Deeper Connection to Life — in Judaism (After Finally Choosing to Look There)’ is published by Penguin Random House USA