Lord Sacks: Charedi community ‘does not have to be afraid of the outside world’ 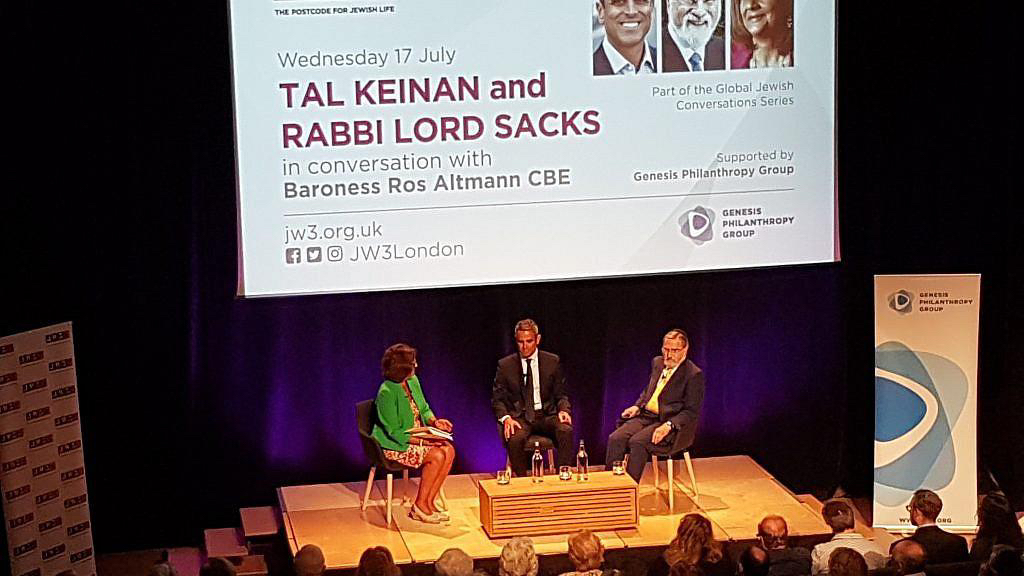 Former chief rabbi Lord Sacks has told a London audience that he “embraces converts” and that the strictly Orthodox community “does not have to be afraid of the outside world”.

Rabbi Sacks was in conversation with entrepreneur and businessman Tal Keinan, whose new book, “God Is In The Crowd” has received enthusiastic endorsement around the world.

The encounter, moderated by Baroness Ros Altmann, took place at JW3, which is now in partnership with the Genesis Philanthropy Group for a series of “Global Jewish Conversations”, of which this was the first.

It follows from a highly successful pilot event last year between the Genesis co-founder, Mikhail Fridman, and former Soviet refusenik Natan Sharansky. The aim of the new series, said JW3 chief executive Raymond Simonson, was to bring the best of the diaspora to the British Jewish community.

Tal Keinan, 50, asks a controversial question in his book: “Should there be Jews?” In a frank presentation to the packed JW3 audience, he said that he came from a typical American Jewish family — typical in that all three of his older brothers had married non-Jewish women. “Relatively early in life it occurred to me that Judaism is optional — certainly in the US — and that hasn’t been the case for the large swathe of Jews in 2,000 years. And we are not opting in — we are opting out.”

The trend showed that in two generations there might not be Jews identified as such in America. Tal Keinan chose a different path by emigrating to Israel, becoming a fighter pilot, and then a businessman and philanthropist. But in questioning what he was doing, he said, he came up with more questions — “if I am only Jewish because of antisemitism, is that enough?” He said he was open to negative responses but he felt that at the moment, the Jewish future was not guaranteed.

Part of the problem, Mr Keinan said, was that there was no central definition of who is a Jew. In previous times, this had not mattered if rabbinical approval had been granted to conversion in Morocco which might not be granted in Paris. But today, and most particularly in Israel, it had come to matter more and more. “Israel’s approach of bludgeoning Judaism into its citizens is not working”.

Rabbi Sacks acknowledged that “Jewish identity is fuzzy round the edges at the moment”, but believed that “we have to live with it.” He said that Jewish life was “enriched by converts” and said that his own teacher in his first yeshiva had been an Australian convert to Judaism. In the 20th century, he said, there had been two miracles: the birth of the state of Israel, largely driven by secular Jews, and the re-birth of the Jewish people, spearheaded by the Eda Haredit strictly Orthodox groupings.

Now, Rabbi Sacks said, it was time for the strictly Orthodox to acknowledge that they had “won” in the battle of Judaism by their astonishing numbers, and — citing the example of the Lubavitcher Rebbe — that it was time to reach out to the outside world.

CEO of Genesis Philanthropy Group, Ilia Salita, said: “The Global Jewish Conversations series aims to inspire, educate, entertain and challenge. The inaugural event did just that, with the esteemed Rabbi Lord Jonathan Sacks and Mr. Tal Keinan sharing their wisdom and insight in front of a full house at JW3. GPG is proud to partner with JW3 on this important series, which will continue to provide an interactive and inspiring space for the whole community to engage with the best of contemporary Jewish thought.”