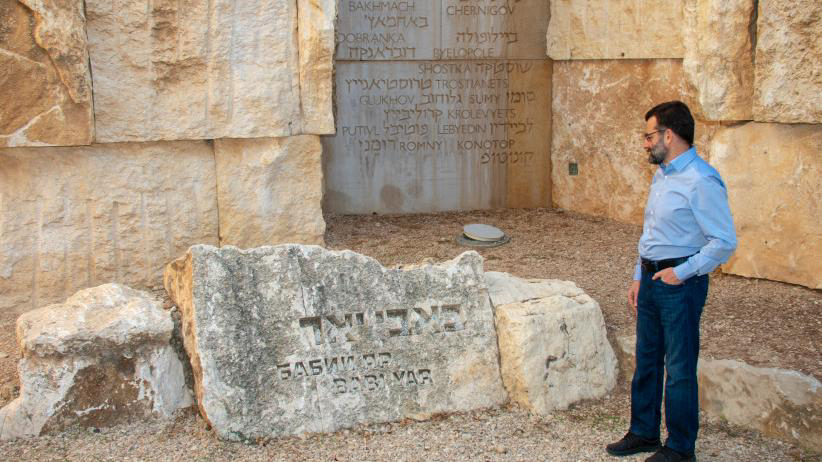 The letters, which were found in Yad Vashem’s Archive as well as other archives and translated into English, open a window into the world of Soviet Jewish thoughts and feelings at that time.

In 2016, the Moshe Mirilashvili Center for Research on the Holocaust in the Soviet Union at Yad Vashem published To Pour Out My Bitter Soul: Letters of Jews from the USSR, 1941-1945, a collection of one hundred letters written by Jews living in the Soviet Union during this tumultuous period in world history. The letters, which were found in Yad Vashem’s Archive as well as other archives and translated into English, open a window into the world of Soviet Jewish thoughts and feelings at that time.

The letters were written starting with the German invasion of Russia in June 1941, and throughout the war, until late 1945. They were penned by Jews who lived in the USSR before the outbreak of World War II, or were residents of the territories annexed by the USSR in 1939 or 1940. Some were serving in the Red Army, while others were in the Soviet rear, or were living in Nazi-occupied territories, and witnessed the events of the Holocaust first-hand. This month, the Moshe Mirilashvili Center will be publishing a Russian-language version of the book, edited by Dr. Arkadi Zeltser, director of the Center.Zeltser explains that personal letters can often express the deepest feelings of the letter-writer. “Letters express the feelings of the author and his worries. He is often thinking about the person to whom he is writing. The letter writer often does not think that his letters will be publicized, so he is more personal and open, writing about issues that are important to him.”

Zeltser adds that the first version of the book was printed in English so that the world at large would understand the travails and difficulties experienced by Soviet Jewish citizens. Nevertheless, he says, it is impossible to convey the meaning and feelings through a translated version. “In these wartime letters, we feel the trauma through the text, and it is difficult to express in translation, because it is so sensitive. These letters show how people acted, both as Soviet citizens and as Jews, and how they reacted to the Holocaust and antisemitism.”

ON THE EVE of World War II, many Soviet Jews could not clearly formulate their identities. As Jews migrated from small towns to large cities in the Soviet Union, their Jewish ethnic identification was weakened. Additionally, they were reluctant to identify as Jewish due to official Soviet anti-religious policies. The author gives an explanation of the impact of the Holocaust, as well as detailing negative remarks about Jews that were being expressed in the Soviet interior.The main criterion for selection of the letters published in the book is the presence of a clearly expressed Jewish ethnic identity. Many of the letters reveal that the Jews viewed the war not only from the general Soviet perspective, but from a Jewish one as well. “Involved in the whirlpool of the war that affected all of the Soviet peoples,” writes Dr. Zeltser, “these Jews simultaneously were attempting to discover their own ethnic identity.”

One example is a note written in March 1945, by a Jewish woman who hoped that although she had observed the Passover holiday under wartime conditions, she yearned for the upcoming holiday of Shavuot to be celebrated during peacetime.The letters in the book, written in the fog of war and its attendant confusion, reflect people’s emotions, loneliness and need to redefine the meaning of their lives under Nazi rule. Like the English edition, the Russian version of the book is divided into seven sections. The first chapter, entitled ‘Last Letters,’ contains the final notes written before their death. Some letters were written by Holocaust victims and sent to friends and family shortly before they were murdered. Frequently, these poignant farewell notes contain a message requesting that their murders be avenged. Others simply express desperation and sadness. The letter written by Tumer and Aron Gonchar from Vinnitsa, a city in west-central Ukraine, to their sons in April of 1942 is a case in point. “I am writing to you, my dear children, perhaps for the last time. There are no words to express our desire and urge to live but, evidently, that is not to be. We would at least like to see you, my golden ones. Don’t cry. Don’t become depressed. If you both return from the front, don’t abandon each other. If any of our relatives return, take care of them. Behave as you have up unto this time, my dear, beloved, sweet children.” About 15,000 Jews of Vinnitsa were murdered by the Nazis in two large-scale murder operations, in mid-September 1941, and in mid-April 1942.

Some of the letters in the collection were written to officially recognized Soviet organizations, such as the Jewish Anti-Fascist Committee (JAC), which had been established by the Soviet authorities in 1942 to influence international public opinion and organize political and material support for the Soviet fight again Nazi Germany. Many Jews viewed the JAC as the official address on behalf of Jews in the USSR, and addressed letters to Shlomo (Solomon) Mikhoels (1890–1948), who was both the chairman of the JAC and the main director of the Moscow Jewish State Theater, and to Shakhno Epshteyn, both executive secretary of the JAC and editor of Eynikayt, the official newspaper of the JAC. Others were sent to Ilya Ehrenburg (1891–1967), the most popular Soviet wartime journalist, who was also a member of the JAC.

The other chapters of the book are entitled “First Reactions to Mass Murder,” focusing on how Jews learned and accepted about the death of their relatives; “Reactions to Grassroots Antisemitism,” the letters which discuss the antisemitism that they encountered in the army and in the Soviet interior; “Jewish Life in the Soviet Interior,” “Jewish Life in the Liberated Territories,” Soviet Patriotism and the Image of the Jewish Soldier” and “The Issue of Jewish Military Units in the Red Army.” One letter, from the chapter on “Jewish life in the Liberated Territories,” written in May 1945, discusses negative attitudes toward Jews among residents of Dnepropetrovsk, a city in Central Ukraine. “Even today, when all the peoples in our country in fact have rights and make full use of their rights, we Jews are not able fully to utilize our rights: we are hated, pursued, and beaten.” Another letter, written by a doctor who had lived in Odessa, describes his return to the city after the war, when he experiences both antisemitism or an absence of Jews. “In Odessa,” he writes, “a city that until recently had a Jewish population of more than two hundred thousand Jews, there are fewer than two hundred today!”

IT IS ESTIMATED that the number of Jewish military personnel in the Red Army ranged between 300,000 and 500,000. According to official statistics of the Ministry of Defense of the Russian Federation, 142,500 Jews were killed in combat. In one letter, the writer urges Shakhno Epshteyn to collect information on Jewish participation in the war, in order to combat rumors and innuendo that the Jews avoided engaging in direct combat at the front. In fact, writes the book’s author, the percentage of Jews among those who received military honors was quite high.

“We are grateful to Genesis Philanthropy Group for its generous support of the research that became the basis for this book,” stated Zeltser. The Russian version of To Pour out My Bitter Soul will undoubtedly find an appreciative audience among the younger generation of Russian-speaking Jews, who do not have as great an awareness of the events of the Holocaust in Russia during World War II. Through these letters, the reader will gain a greater understanding of the cataclysmic effects of the Holocaust in the USSR.