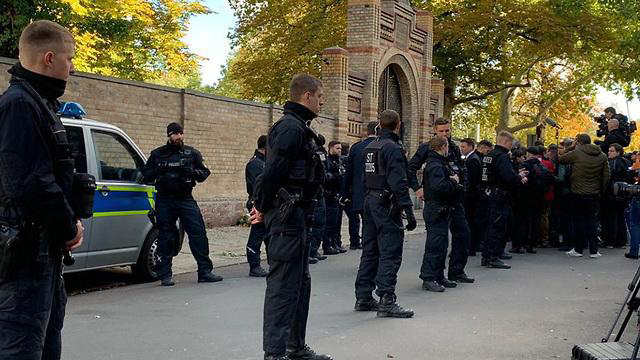 The Jewish Agency Fund for Security Assistance sees a rise in requests for assistance from communities seeking protection from terror attacks from both the extreme right and Islamic groups.

Dozens of Jewish communities around the world have appealed to the Jewish Agency fund for urgent assistance in securing their facilities in case of attack from terrorists from the extreme right-wing or Islamic groups.

Their request is for defense primarily against incidents of mass shootings.

The Jewish Agency says an appeal will have to be made to wealthy Jews to assist in the efforts to answer the growing demand for defense.

The Agency also expressed the hope that the Israeli government will provide some of the needed funds.

The government decided to transfer $4 million and the Jewish Agency has committed to matching that amount.

"It is just a matter of time before another attack takes place and we feel completely exposed and lacking the necessary defense," say some officials from Jewish communities.

The demands come after a rise in anti-Semitic incidents that have claimed dozens of lives in the United States and in Europe.

The Jewish Agency Fund for Security Assistance, provided for security at the German synagogue attacked last month, where the reinforced door prevented the assailant from entering the premises and carrying out his murderous intentions.

There are 50 Jewish establishments in 24 countries whose requests for security funding are currently being processed by the Jewish Agency, but many more communities will require assistance by the end of 2020.

Half of the money the Jewish Agency Fund has been able to provide communities in the seven years of its existence, comes from Jewish philanthropists such as Michael Fridman who said he was proud to assist Jews around the world.

“Still I am very concerned that in 2019, Jews do not feel safe even in the center of the most liberal and developed cities,” he said.

Prime Minister Benjamin Netanyahu told the Jewish Agency board of trustees last week that in order to ensure the safety of Jews around the world, Israel's safety must be guaranteed.

“The Jewish State has a responsibility towards all Jews around the world and the government has allotted funds to protect against the threat of violent anti-Semitism,” he said.