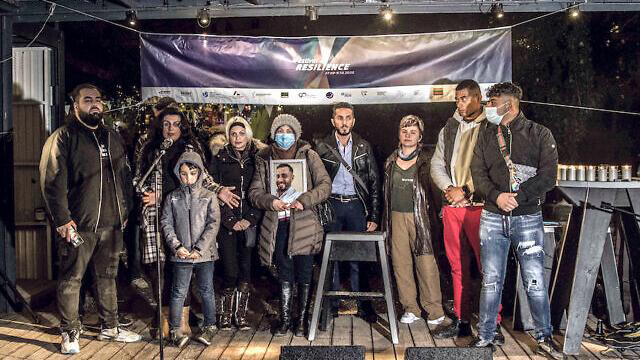 Around 150 young people gathered at a beer garden in Gleisdereick Park for the High Holiday Festival of Resilience, to both commemorate the Halle attack and to move forward.

Young Jewish Berliners have celebrated the resilience of the Jewish community in the German capital to mark one year since a gunman attacked a synagogue in the central city of Halle.

The event was especially pertinent because some of the teenagers and young professionals who took part in the week-long High Holiday Festival of Resilience had been in the Halle synagogue on the day of the attack last October.

Weaving tradition and innovation, a moving ceremony was a focal point in a week of activities from Yom Kippur to Succot in a festival supported by Genesis Philanthropy Group (GPG), Hillel Deutschland, the Central Council of Jews in Germany, the Alfred Landecker Foundation, and the Amadeu Antonio Stiftung.

Around 150 people gathered at a beer garden in Gleisdereick Park for an event that Hillel director Rabbi Rebecca Blady said was designed to both commemorate the Halle attack and to move forward with confidence.

“Even as we come together and support each other, we also state that trauma does not define who we are as a people.”

The Jewish community in Germany is small but strong and increasingly proactive in dealing with challenges such as those posed by the resurgence of far-right activists.

Marina Yudborovsky, GPG chief executive, said the festival gave young Jews in Berlin and Germany an opportunity “not only to confront the evil of what happened in Halle, but to come together in unity and solidarity, born of optimism to continue envisioning and creating a bright future”.

Participants also heard from Faruk Arslan, who lost his family in the 1992 neo-Nazi firebombing of a home of Turkish migrants in Mölln, as well as from student and communal Jewish leaders.