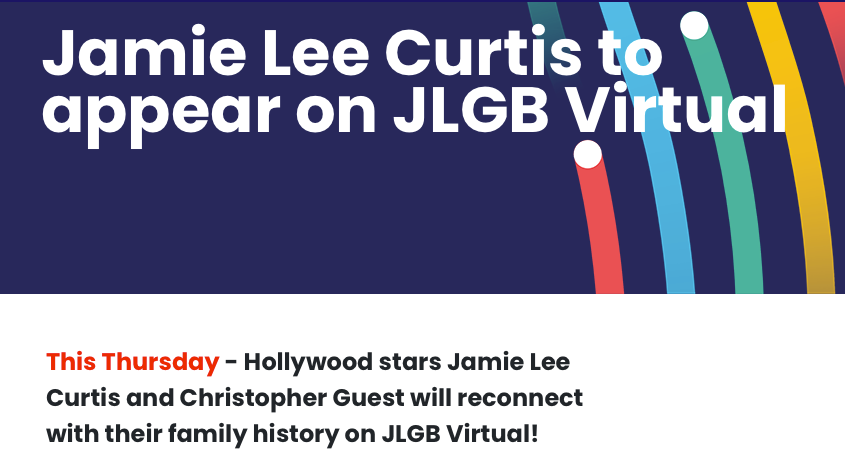 Jewish youth charity will mark its 125th anniversary with a special appearance from the world-famous actress and director duo.

Actress Jamie Lee Curtis will reconnect with her Jewish roots while appearing on the 100th episode of JLGB Virtual next week.

The author and activist will feature next Thursday with her director husband Christopher Guest, to help the charity mark 125 years  since it was founded.

Launched at the start of the first lockdown in March 2020, the episode on 4 February will be 45 weeks since it charity took its activities online due to the pandemic, with previous episodes being seen by more than 3 million people.

Guest, famed for cult-classic mockumentaries like This Is Spinal Tap, Waiting for Guffman and Best in Show, is the great-grandson of Colonel Albert Goldsmid MVO who founded JLGB in 1895, while Curtis, whose parents were Hollywood royality Tony Curtis and Janet Leigh, has spoken of her Jewish roots, born to the son of Hungarian Jewish immigrants.

The duo who recently marked 36 years of marriage will appear at the event to reflect on their careers and off offer words of encouragement to young Jewish activists.

Speaking in advance of Thursday’s event, JLGB CEO Neil Martin OBE said, “It’s an honour to be hosting two incredible people in Jamie Lee Curtis and Christopher Guest. Our young leaders are excited and inspired to hear about their remarkable careers and legendary films. It will be so very special to celebrate their incredible and historic connection with JLGB, which was founded 125 years ago by Christopher Guest’s great-grandfather!”.

Marina Yudborovsky, CEO of Genesis Philanthropy Group, which is supporting the event, said, “The success of JLGB Virtual is a testament to the potential of digital tools to successfully engage youth. We are proud to have been supporting this series of online events since the first lockdown in March 2020, as well as JLGB’s wider work to empower young people over the course of several years. Congratulations to the whole Virtual team, and especially the young leaders involved, on reaching this 100-episode milestone and for featuring such a wide array of impressive guests, not least Jamie Lee Curtis and Christopher Guest!”