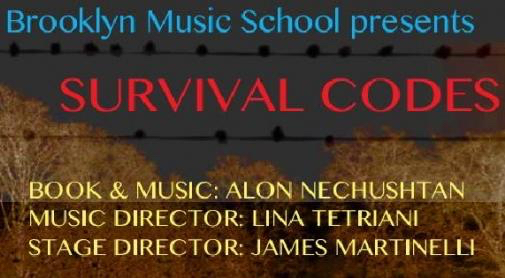 Right after the successful closing of his last Musical Captain Filthy Fred, Italian American actor and performer Andrea Galata comes back on stage

with the role of Fima in Survival Codes, a one night special event hosted by the Brooklyn Music School and supported by the Genesis Philanthropy Group.

Set in the pre-perestroika days of the 1980s in the Soviet Union, Survival Codes, original play by the Uzbeki-born pianist and composer Alon Nechushtan, is a tale of religious persecution and escape from hate through love and music. Centered on the story of two childhood friends who find their freedom from the political and social instability and repression of the Stalinist Soviet Union, the plot throws in historical allusions to the Holocaust, Chernobyl, the Kabbalah and the I-Ching, as well as narrative inspiration from the works of songwriters Bob Dylan, Leonard Cohen and Billy Joel.

Directed by James Martinelli, the "opera-musical drama" is also part of the COJECO BluePrint Fellowship.