It is thrilling to watch our community evolve 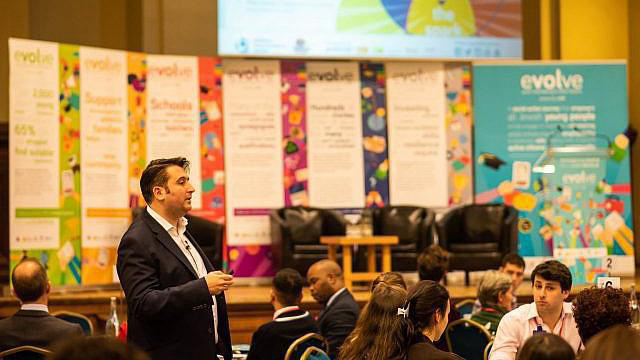 With a backdrop of doom, gloom and uncertainty enveloping society, it’s no wonder a recent survey found that, for the first time in generations, many parents are worried about their children’s future.

Yet in stark contrast, last night’s JLGB celebration of youth volunteering should reassure us all that, despite the world we may pass on to them, the next generation is determined to ensure their future is bright.

More than half of all pupils in Jewish schools are now working towards a volunteering award through JLGB’s eVOLve youth volunteering and skills initiative, which last night celebrated its fifth anniversary since first launched by the Chief Rabbi in 2014.

One of London’s most iconic music venues, the Roundhouse, was filled to capacity thanks to the support of Genesis Philanthropy Group, as JLGB brought together hundreds of young award recipients from across the entire eVOLve award journey. This included participants from the Yoni Jesner Award, the Duke of Edinburgh’s Award, National Citizen Service and Open College Network Qualifications.

Through harnessing the collective power and impact of young volunteers, eVOLve’s vision was to create a digital social action journey that empowers Jewish young people to fully engage in meaningful volunteering, while enhancing their employability and transferable skills, enabling them to become active citizens in their local community and wider society.

The project was JLGB’s response to the ever-changing needs of young volunteers, bringing together all key stakeholders from across the community to ensure that youth social action becomes more accessible and more rewarding than ever before. Five years later, and with more than 150,000 hours already logged on the eVOLve platform, I think it’s safe to say that these phenomenal young people have created a revolution in youth volunteering.

From campaigns to highlight mental health and loneliness to tackling knife crime and climate change, from supporting refugees, the elderly and the homeless to promoting gender and disability equality, to addressing the urgent need for greater social cohesion through interfaith dialogue. You could fill this entire newspaper with inspirational stories of our community’s young volunteers who have been dedicating their time to addressing some of the key issues facing society today.

Last night was our opportunity to say a resounding thank you to those young volunteers by offering them a ticket to an exclusive concert featuring an outstanding performance by R&B superstar Craig David. It was also a chance to show our appreciation for all the parents, teachers, charity professionals and youth leaders who support young volunteers

Now thanks to continued funding from Genesis Philanthropy Group, alongside three-year funding from the #iwill match fund, the Department for Digital, Culture, Media and Sport and the National Lottery Community Fund, JLGB are embarking on a major expansion of the eVOLve initiative.

This funding gives us the once-in-a-lifetime chance to give direct support to schools, synagogues, youth groups and charities to co-create more impactful volunteering opportunities that are youth-led, faith sensitive and inclusive.

If we can seize this moment and work together to make youth social action sustainable across the entire Jewish community, then as thousands of young volunteers have already demonstrated, the long-term prosperity of our community is undoubtedly in safe hands.