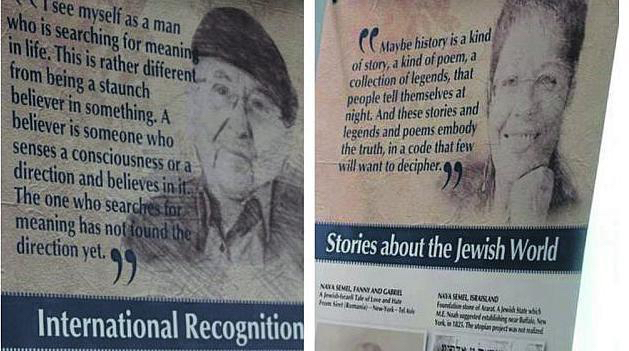 Authors who wrote extensively about Chernivtsi, which was once described as “the Jerusalem of Ukraine”, are recognised in a new display.

Iconic Jewish Israeli writers Aharon Appelfeld and Nava Semel were honoured in an exhibition in a city in western Ukraine last week.

Both authors grew up around – and wrote extensively about – Chernivtsi, also known as Czernowitz, which was once described as “the Jerusalem of Ukraine”.

Appelfeld was nine when, in 1941, troops stormed his village. His mother was killed and he was deported, along with his father, to a forced labour camp, where he spent three years before being made to fight in the Soviet army.

He emigrated to Palestine in 1946, later winning the Israel Prize in 1983.

Semel, who died in 2017, authored 20 works of fiction, plays, scripts and opera libretti, including Kova Zekhukhit (Hat of Glass), the first and most famous literary effort focusing on the children of Holocaust survivors.

Now, an exhibition on the icons, called My Chernitvtsi: two authors, two generations, is running at the local university, organised by the Russian-language Limmud FSU, ahead of this year’s festival in the Ukrainian city of Odessa.

The exhibition was initiated by Limmud FSU founder Chaim Chesler.