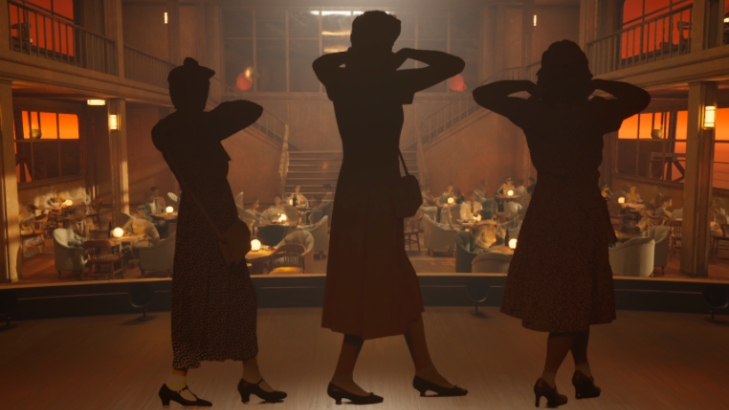 A mix of live theater, film and virtual technology, “Witness” documents the trials and tribulations of Jewish immigrants.

If any group of people knows about antisemitism firsthand, it is the members of the Needham-based Arlekin Players. The company of Soviet Jewish refugees and immigrants was formed 12 years ago as an acting studio. Over the years, the award-winning company has evolved into the present-day Zero-G Virtual Theater Lab. The “G” stands for “gravity,” and in many ways the company’s artistic director, Igor Golyak, defies gravity. He has converted his studio into green-screen space to present virtual performances, the latest of which is his production, “Witness.”

Golyak and playwright Nana Grinstein have created a distinctive example of documentary theater in “Witness.” The two have based the play on documents, including telegrams, letters, journal entries and ship logs of featured ship St. Louis, a German liner carrying over 900 Jewish passengers escaping Nazi Germany and destined for Havana, Cuba, in 1939. However, Cuban authorities denied the ship permission to land, as did the United States and Canada. The ship was eventually turned back, and of the 937 passengers on the St. Louis, 254 perished in the Holocaust.

While the tragedy of the St. Louis is central to the play, Golyak said the inciting incident for writing and producing “Witness” was the stabbing of Rabbi Shlomo Noginski last summer in Brighton. The father of 12 was brutally attacked in front of a Jewish day school. “Arlekin Players is a company of Jewish immigrants, and we’ve been watching the rise of antisemitism in Boston and other American cities,” Golyak said. “When we heard about Rabbi Noginski’s stabbing, one of the company members asked, ‘Where do we go next?’ That question stayed with me, and I knew that I wanted to do a documentary theater piece about this.” Golyak immigrated from Ukraine more than a decade ago. “When we Soviet Jews immigrated,” he said, “we left our homeland, relatives, friends and even the ashes of our grandparents.”

Setting out to tell a universal story of Jewish immigration and antisemitism with the St. Louis’s fate as the central metaphor, Golyak and Grinstein incorporated archives from the United States Holocaust Memorial Museum. “Everything in the play is verbatim from the Holocaust Museum’s archives,” said Golyak. “We dramatize the documents in many ways, including reading them out loud and posting the words on a screen to create an immersive document-based experience in a virtual setting.”

Grinstein said her ongoing engagement with documentary theater involves “making projects about people of different social and ethnic groups. I always try to tell stories that will become understandable not only to representatives of these groups but also to any person.” She likens her script “to taking a journey with the audience. It will be difficult, but we hope to surprise you at every step.”

A native of Moscow who lives and works there, Grinstein was intrigued by the universality of the St. Louis’ story—a story she said is about “unacceptable, unwanted people fleeing from pursuit and stumbling upon a cold wall. Mercy did not triumph over bureaucratic and political circumstances in this story. Humanity turned out to be less important than the immigration quota.”

In advance of the St. Louis’ sailing, Cubans took to the streets of Havana to protest, allowing the Jewish passengers to disembark. To that end, Golyak described the play’s first act as the actual fleeing and sailing from Hamburg to Havana. In Act II, the passengers understand they cannot leave the ship and are remanded to their cabins. In the end, they understand the ship will be forced to return to Hamburg and all the dangers awaiting them there.

As the play’s director, Golyak was interested in the timing of the St. Louis’s voyage. He said many passengers had lived through Kristallnacht in 1938, and some people had boarded the ship directly from labor camps. Searching through the relevant documents, he was struck that so many of the passengers’ accounts pointed out how the luxurious the boat was and how they were treated kindly. He was surprised to discover that movies were shown on board and people were roller skating. However, he was most taken with the talent shows the passengers organized. “I found it very interesting dramaturgically because having a talent show while you’re escaping to survive is very human and eye-opening,” he said. “Some of the journal entries featured in the first act are performed as acts of a talent show on board the St. Louis.”

The 10-minute second act is only audio as the St. Louis passengers await news of their fate. Golyak explained that the audience will be asked to turn off the lights in their rooms, put on stereo headphones and sit next to a door. There will be a binaural microphone, which Golyak explained is a novel way to record sound. For example, when there is a knock on the door in the play, the audience will hear it as if someone knocked on the door next to them.

The goal is to convey the immediacy of the fear, confusion and desperation the St. Louis passengers experienced. “They didn’t understand what was happening to them,” said Golyak. “They heard people pass by their doors, or they heard an announcement. There are also Cubans mounting protests, as well as the Cuban government’s inhumane response. The audience is completely immersed in that soundscape, and the virtual production becomes the cabin on the boat. You feel like you are right there.”

In the third act, a man trapped on the St. Louis opens cabin doors and happens on scenes of modern-day antisemitism. Golyak described this act as “the voyage to nowhere, which includes contemporary stories of migration and the displacement of people. Twentieth-century immigrants and Jewish refugees fleeing persecution will be highlighted.”

By the end of the evening, Golyak said “Witness” will have “amplified these themes of migration and antisemitism.”