In Ukraine’s crisis, our shared responsibility is the spark of hope 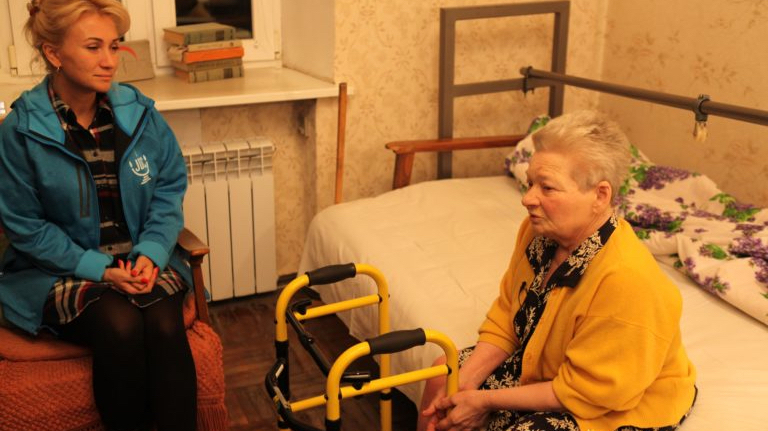 When the invasion began, all the bowls in the cabinet started to rattle and shake, and the chandelier suddenly swung wildly.

At midday, the sky turned black, the sun blocked out by military planes.

Anatoliy Ginzburg was only 9 in 1941 when war ravaged Ukraine, but he was already old enough to know he was living through hell.

“The explosions began, and weeks of war began,” Ginzburg, now 90, told me when I interviewed him in Kharkiv two years ago. “G-d forbid that anyone should witness such horror with their own eyes.”

Now, of course, Ginzburg is facing another war — just like tens of thousands of other Jewish seniors and millions of their neighbors in Ukraine. They’re in big cities like Kharkiv and Kyiv, and they’re in tiny outposts like Koshary and Konotop. All are afraid, and for many, the events of this week are a return to the deepest, most base traumas of childhood.

By any definition, Ukraine’s elderly Jews, like all those throughout the former Soviet Union,  have had it uncommonly hard. Some came of age in wartime, and all endured decades of oppression and antisemitism under the Soviet regime, somehow eking out stability from the turbulent 1990s and continuing to make ends meet on pensions as low as $2-3 per day. They endure largely thanks to the food, medicine, homecare and emergency humanitarian support provided by my organization, the American Jewish Joint Distribution Committee (JDC).

Look too quickly, and you might assume these babushkas and dedushkas are simple pensioners — carefully parceling out tiny fixed incomes, hanging up heavy carpets and wearing winter coats inside to keep out the bitter Ukrainian cold. But come closer and you’ll find Superman and Wonder Woman. They can offer us a master class in Jewish resilience, and they are treasures we must move heaven and earth to protect.

In the face of the current dread and doom that grows exponentially by the hour, it’s easy to feel useless, to wallow in the assumption that there’s nothing we can do. But even in the darkest moments, our tradition teaches us that something unshakable links us all — a sense of responsibility to each other, an unbroken chain of Jewish mutual care.

My heart is in Ukraine these days — my grandfather’s homeland, and the country I’ve fallen in love with on a half-dozen trips to visit elderly Jews in their homes and dynamic young leaders at Jewish teen retreats and educational seminars. Since the invasion, I’ve been in constant touch with friends and colleagues across the region, and I’ve been profoundly moved by their selflessness and courage.

Though she’s been living in an underground parking garage for more than three days, one colleague — a single mom with a preteen daughter — is still making time to call and check in on isolated elderly Jews in her city. Another — a 23-year-old who’s only worked for JDC since December but refuses to leave his post in Kyiv — attempted to deliver jugs of water to his neighborhood bomb shelter, only to be thwarted by air raid sirens.

I have colleagues from Ukraine, Moldova and Israel working hotlines for at-risk Jews sheltering in place, and they’re hearing the most incredible stories — homecare workers so committed to their work that they are hunkering down with their clients through the curfews and the shelling, rather than with their own families; an octogenarian in hiding in the same house where she hid during the Holocaust.

Years before I met Anatoliy, I was in Kharkiv on another trip, sitting at the bedside of Margarita Lubashevskaya, a disabled piano teacher born in 1946 in a Kharkiv that still bore the fresh scars of war.

She had recently fallen and broken her thigh, losing her mobility and her livelihood in one fell swoop. Despair beckoned, but Margarita had a life raft — her beloved homecare worker, a devoted childhood friend who now cooked and cleaned for her, shopped for her groceries, and brought her to the doctor.

“I just never thought that, at the end of my life, after everything that’s happened, that it would be like this,” she told me. “I’m a little low on optimism these days, but I have to hope. Nothing else is left.”

What do we do with that? How do we respond to a world that can seem so cruel, that daily seems to subject the most vulnerable to new horrors? We channel Margarita’s homecare worker — we show up and bear witness, we listen, we help.

And we can remember we’re not alone in our efforts — we’re joined by an alliance of individuals and foundations and partners looking to care for the neediest, including the Claims Conference, Jewish federations, IFCJ, the Maurice and Vivienne Wohl Charitable Foundation, Genesis Philanthropy Group and World Jewish Relief.

We can also find motivation in the words of another Kharkivite: Mikhail Birbrover, a retired taxi driver and former volunteer van driver for one of our Hesed social welfare centers.

“Who needs us? Old folks, and Jewish ones at that,” he told me back in 2017, waving his hand dismissively. “But Jews are Jews, and we support one another. It’s very important — in one word, it’s life.”

At this critical time, let’s remember we are not powerless. Hesed, mitzvah, tzedakah — even sticklers for Hebrew grammar would surely agree that these concepts are more than abstract nouns. When the moment demands it, they are verbs, they are fuel, they are another name for G-d’s enduring grace.
If Anatoliy, Margarita and Mikhail can keep going, we owe it to them not to lose hope.

We have the power to save a world on fire through simple and transformative acts of caring, by supporting our neediest and by remembering our responsibility to one another.