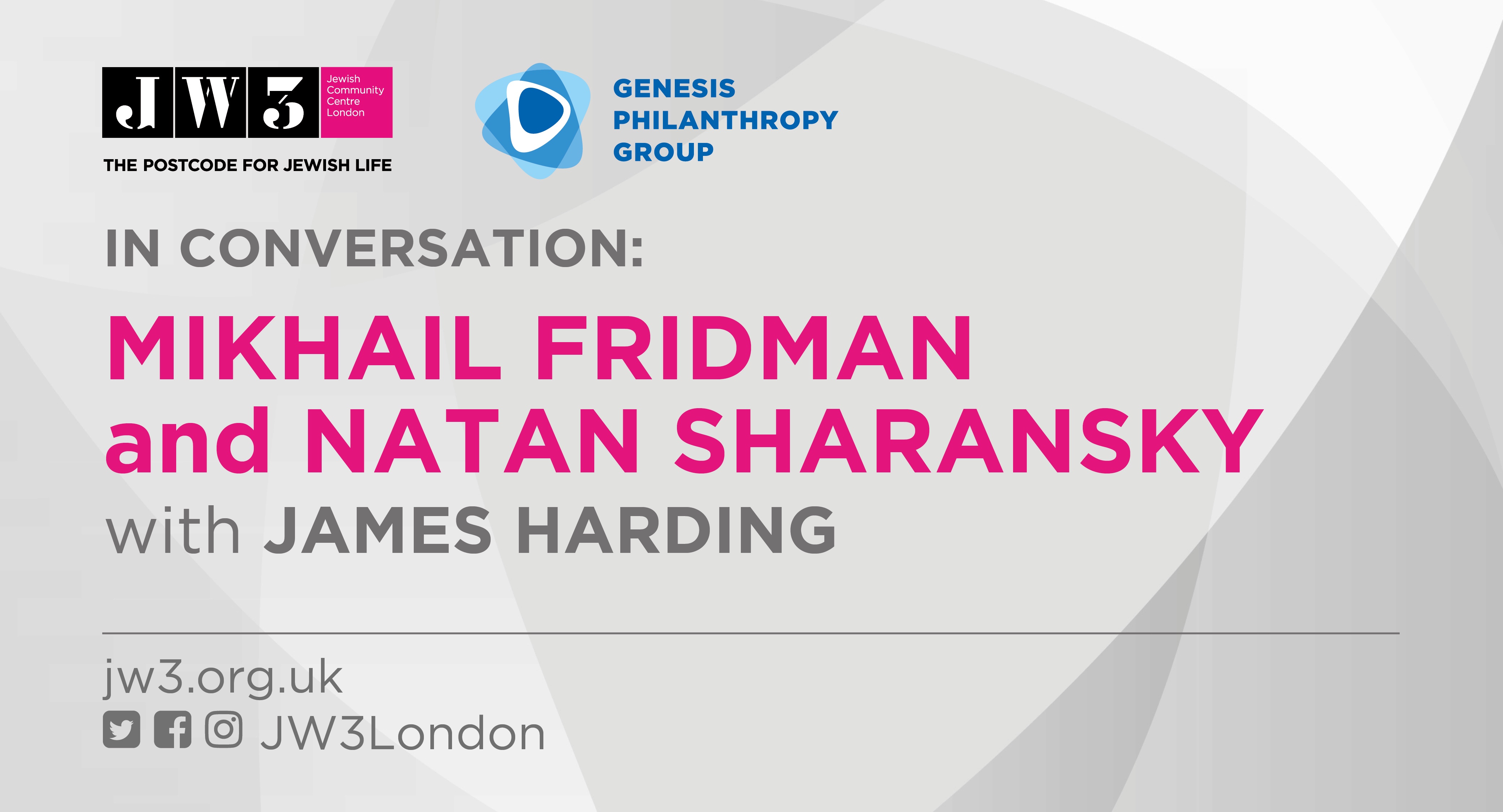 Two global Jewish leaders will discuss the current state of Israel-Diaspora relations, their vision on future opportunities to strengthen the bond between the Jewish people around the world and the challenges of Jewish communities in Europe and beyond.

In a rare intimate setting, Mikhail and Natan will share their personal stories and how these stories shaped them into the Jewish leaders they are today. The conversation will be facilitated by the renowned James Harding, the Director of News and Current Affairs at the BBC.

More about the speakers:

Mikhail Fridman is an international businessman, investor and philanthropist, who is a co-founder and member of the Board of Directors of Genesis Philanthropy Group.

Mikhail was born into a Jewish family, in Lvov, Ukraine. Mikhail graduated from school in 1980, where he won school Olympiads in physics and mathematics. After graduating from one of the top universities in Moscow, he started as an entrepreneur. Together with several partners he has built private businesses from the bottom up, in retail banking, telecoms, insurance and water.

Mr. Fridman is co-founder of LetterOne (L1), an international investment business, headquartered in Luxembourg, with offices in London and New York. L1 has around $23 billion under management and buys and builds investments internationally – in the energy, telecoms and technology, health and retail sectors. L1 also invests in private equity funds. L1 most recently bought the UK retail chain Holland & Barrett, from The Nature’s Bounty Co. and The Carlyle Group for £1.77 Billion. Holland & Barrett is one of Europe’s largest Health and Wellness retail chains with stores in more than 1,150 locations worldwide.

He is also co-founder of the ABHH group based in Luxembourg, which invests in banking groups, that provide retail banking services in Europe and former CIS. Mikhail is a member of the International Advisory Board of the New York based Council on Foreign Relations and the founder of the international Jazz festival in Lvov, which is now one of Europe’s top 10 Jazz festivals.

In addition to Genesis Philanthropy Group, Mr. Fridman also co-founded the Genesis Prize and the Russian Jewish Congress, which is an affiliate of The World Jewish Congress.

Natan Sharansky was born in Donetsk, Ukraine. He was a spokesman for the human rights movement, a Prisoner of Zion and leader in the struggle for the right of Soviet Jews to emmigrate to Israel. Subsequent to his request to make aliya, Mr. Sharansky was arrested on trumped up charges of treason and espionage. He was convicted in a Soviet court and served nine years in the Gulag with many stretches in a punishing cell. Following massive public campaigns by the State of Israel, World Jewry and leaders of the free world, Mr. Sharansky was released in 1986, making aliya on the very day of his release.

In his first few years in Israel, Mr. Sharansky established the Zionist Forum to assist Soviet olim in their absorption in Israel. In the 1990's, he established the Yisrael B'Aliyah party in order to accelerate the integration of Russian Jews. He served in four successive Israeli governments, as Minister and Deputy Prime Minister.

Mr. Sharansky is the author of three books and is the recipient of the Congressional Medal of Honor and the Presidential Medal of Freedom. He remains a champion of the right of all people to live in freedom and believes that the advancement of freedom is critical to peace and security around the world.

James Harding has been the Director of News and Current Affairs at the BBC, the world’s largest news organisation, since April 2013.

He was Editor of The Times of London from 2007-2012, winning the Newspaper of the Year in two of the five years he edited the paper. He was previously The Times’ Business Editor, having joined from The Financial Times, where he worked as Washington Bureau Chief, Media Editor and China correspondent opening the paper’s bureau in Shanghai in 1996 – the first European newspaper to open an office in the city since the 1949 revolution. He is the author of Alpha Dogs – How political spin became a global business and he presented On Background on the BBC World Service with Zanny Minton-Beddoes, editor of The Economist.