I FLED ANTI-SEMITISM IN THE SOVIET UNION. IT FOLLOWED ME TO AMERICA 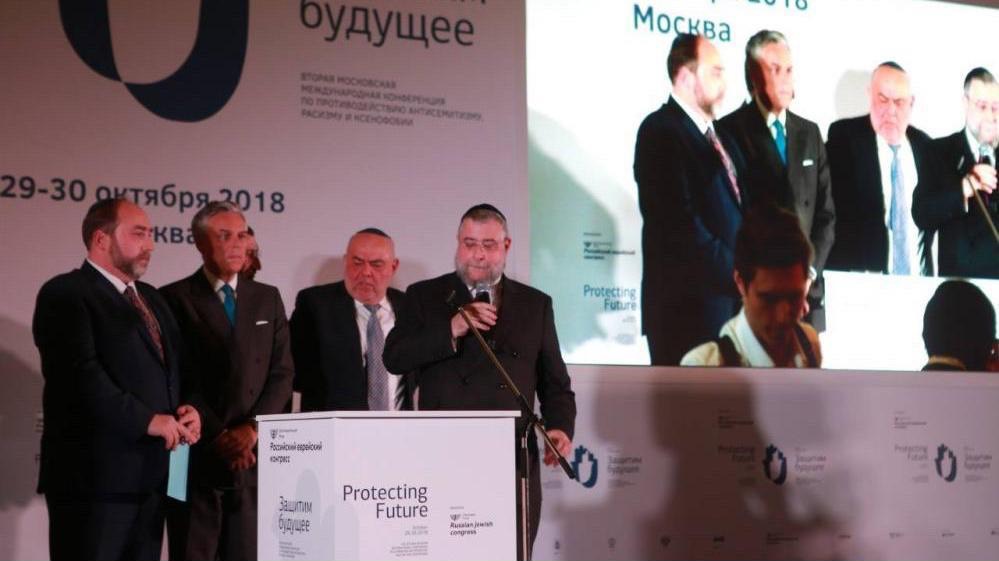 It is a strange time to be a Jewish American who grew up in Russia. Our historical relationship with the two lands is, after all, clear-cut and unambiguous.

For 200 years, Jews escaped anti-Semitic violence in Russia, be it the Russian Empire or the USSR, by fleeing to America. You flee the land of your birth because of the irrational hate and persecution there, only to find a new home in a place where many things can seem alien and even dangerous. But one thing has always seemed clear—in America, it is safe to be a Jew. And it will always be safe—for you, your children and their children.

And yet, in late October 2018, I found myself in Moscow for the second International Conference on Combatting Anti-Semitism, onstage with U.S. Ambassador to Russia Jon Huntsman, Jr., in front of more than 600 people. The two of us recited, one by one, with trembling voices, the names of 11 Jews, murdered simply because they are Jews, in a synagogue, on Sabbath, while praying. Murdered, but not in Russia, Ukraine or Moldova; not in Saratov, Odessa or Chisinau; not in a place that has seen mass-murder of Jews before. Murdered in Pittsburgh, Pennsylvania. In America.

Approximately 80 percent of Jews in the United States are direct descendants of those who fled the Russian Empire, the chaos that followed the Bolshevik revolution, the atrocities of Stalinism and the suffocating anti-Semitism of the post-war Soviet regime. Ours is perhaps the greatest story of immigrants’ success and acceptance, and it is just as much of a tribute to Jewish values and perseverance as it is to America itself. This is a place that is remarkable for its ability to constantly marginalize anti-Semites, reduce them to background noise, deny them legitimacy—something that many other democracies have historically failed to do.

But is it still the same America? In recent years, it looks more and more as if both the right and the left are engaged in legitimizing their preferred flavors of anti-Semitism. Safe spaces for anti-Semites are being created on both sides, and as political polarization grows, both sides are growing more reluctant to alienate allies who might espouse anti-Semitic views, so long as it is the “right” kind of Jews they hate.

The slaughter in Pittsburgh is not the first murderous assault on Jewish institutions in America – it is just the most successful to date. But it is hard not to see the symbolism, not to feel that this momentary triumph of hate signals an unmooring of certain moral anchors on which the safety and security of Jews in America was based. Will Pittsburgh be the harbinger of worse horrors to come, or will we rise together, with our friends and allies, to crush those who articulate and weaponize their hatred of us?

So far, we have allowed ourselves to believe that, after the Holocaust, the resurgence of violent anti-Semitism is simply impossible, especially in America. Now we must face the cold truth: violent anti-Semitic words inevitably lead to violent anti-Semitic acts. And in facing it, we must not panic; we must not hide our heads in the sand; we must not trade empty words. We must do what Jews do best—learn. We must learn from European Jews, who tragically are a few years ahead of us in this fight; who in the past several years have seen murderous attacks on Jewish schools, community centers and supermarkets. They too believed that they would not see the rise of violent bigotry. They, too, got violently disillusioned. They too have seen a Holocaust survivor being killed for being a Jew.

I came to America in 1991 to escape anti-Semitism in Russia. I am a proud American, full of faith in our country and our democracy, and I believe with all my heart it will remain the land of safety and equality for Jews—if we act now; if we act together.

We don’t have to agree on everything. Disagreements are our tradition. They are in our books, in our DNA. But we must stop focusing on what separates us and embrace what unites us. And we must demand from our friends and allies that our needs, our concerns, our fears are respected—in the company they keep, in the words they speak and in their actions.

There is no cause, no ideology, no movement that can be improved by tolerating anti-Semitism in its midst. There are no Jews—not on the right, not on the left, not in Pittsburgh, not in Israel, not in Europe, not anywhere—whom we can allow to suffer incitement and violence by choosing instead to put partisan politics ahead of our fight against anti-Semitism. This lesson was learned by American Jews following the horror of the Holocaust, and they carried it, united, into battle for the freedom of Soviet Jewry—my freedom, too.

This is the level of solidarity we need today. This is the example we should follow. The innocent blood spilled in Pittsburgh demands that we do. So do the future generations of American Jews.

Ilia Salita is the president and CEO of Genesis Philanthropy Group, which works to ensure that Jewish culture, heritage and values are preserved in Russian-speaking Jewish communities across the globe. He came to the United States from the Soviet Union in 1991.