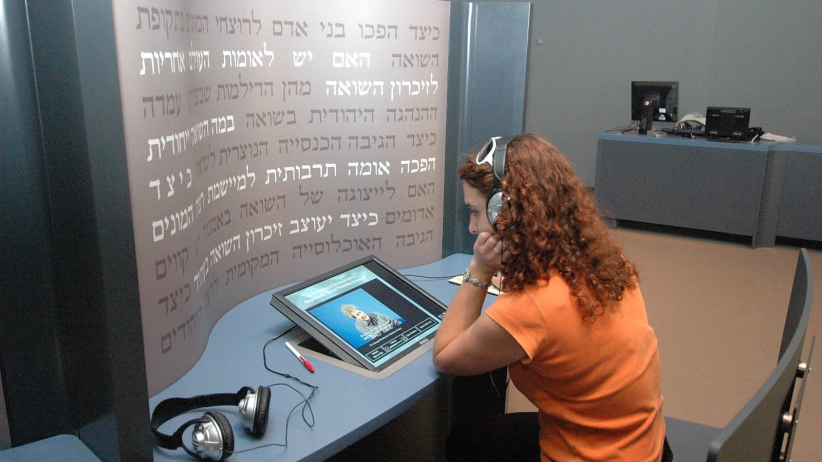 Yad Vashem began the development of an online learning center...

taking questions both from the original material and adding additional material to the Jewish Museum and Tolerance Center.

Where was God during the Holocaust? Could the Holocaust have occurred without Hitler? Why did the Nazis want to kill the Jews? What motivated people to risk their lives to save Jews?

Beyond the “what, where, and when” of the Holocaust, questions of the “why” and “how” often linger in people’s minds long after they have learned the basic facts regarding the murder of six million Jews. To that end, Yad Vashem, the World Holocaust Remembrance Center, with the support of Genesis Philanthropy Group, has recently established an online resource that addresses many of the most challenging questions of the Holocaust. Titled “The War and the Holocaust. Questions about the Past and the Future,” the site features 15 significant questions about the Holocaust, together with responses on video from leading historians, leaders and religious thinkers.

Drachinsky notes that the Learning Center’s setting provides an excellent opportunity for stimulating discussions among educational groups visiting Yad Vashem and touring its various museums and monuments. A central area in the middle of the center enables groups to view and discuss some of these questions through multimedia presentations, guided by trained educators from the International School for Holocaust Studies. An outer circle surrounding the central conference area is fitted with computer terminals and earphones, enabling individual or paired study.

Several years ago, Yad Vashem initiated a project with the Jewish Museum and Tolerance Center in Moscow and developed a learning center in Moscow similar to the one housed in the Jerusalem museum. The center in Moscow incorporated the questions from Yad Vashem and added specific queries that pertained to the Holocaust in the former Soviet Union. Questions such as “What is the reason for the rise of antisemitism in the USSR after the Second World War?” and “How can the trend of suppression of the Holocaust in the Soviet period be explained?” were added to the database, along with video responses from Russian experts.

TWO YEARS AGO, Yad Vashem began the development of an online learning center, taking questions both from the original material and adding the additional material from the Jewish Museum and Tolerance Center. The first five questions and answers were launched in January 2020. In January 2021, a further 10 questions and responses were placed on the site. The development of the online version immediately before the outbreak of the corona pandemic proved especially fortuitous, says Drachinsky, when physical visits to the Yad Vashem Learning Center became impossible.

The online site features questions and answers in Russian and English. The full text of each response is displayed next to the video clip, and audio text appears in English subtitles as the video is being played. For example, answers to the question as to God’s place during the Holocaust are addressed by Prof. Zvi-Walter Bachrach, historian and Holocaust survivor; Prof. Eliezer Schweid, Israeli scholar, writer and professor of Jewish philosophy; Rabbi Yisrael Meir Lau, former chief rabbi of Israel and Holocaust survivor; Cardinal Jean-Marie Lustiger, former archbishop of Paris and Holocaust survivor; and Rabbi Borukh Gorin, head of the Department of Public Relations of the Federation of Jewish Communities of Russia. Each of the scholars provide short answers from his individual perspective.

Drachinsky says that Yad Vashem is considering plans to increase the number of languages for the website. The site was featured at the Yad Vashem international online conference for Russian educators around the world sponsored by Genesis Philanthropy Group last January.

“We received many positive responses. It is a very important tool that can help the younger generation navigate the moral and historical legacy of the Holocaust,” says Drachinsky.

“The COVID pandemic has underscored the importance of online resources which are constantly accessible from every corner of the world,” says Genesis Philanthropy Group CEO Marina Yudborovsky. “In these challenging times, the lessons of the Holocaust and the issues it raises are more critical than ever. We are glad to be able to add this component to the framework of our long-term partnership with Yad Vashem.”

The site is accessible online.