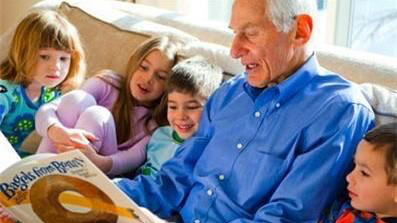 Harold Grinspoon is celebrating his 90th birthday this week.

The multi-millionaire and active global Jewish philanthropist dedicated the first part of his life to building Aspen Square Management into one of the largest privately held property management firms in the U.S. Today, the name Grinspoon is synonymous with Jewish funding and the PJ Library program he founded.

Grinspoon got his start in real estate when bought a single two-family rental property in Western Massachusetts in the 1960s. In 1991, after a cancer scare that made Grinspoon realize that life was about “more than making money,” he created the Harold Grinspoon Foundation (HGF)—an institution that now operates as a public charity and sees itself as a nonprofit incubator and capacity builder. Since its founding in 1991, the foundation says it has invested more than $200 million in efforts to “make Jewish life and the Jewish community more vibrant and more connected.”

By the time they signed the Giving Pledge in 2015, Harold Grinspoon and his wife Diane Troderman had already been giving millions of dollars to Jewish and non-Jewish causes. But the couple’s strongest funding priorities have been in the Jewish community.

In his letter for the Giving Pledge, Grinspoon writes that as the only Jew in his neighborhood growing up, he faced relentless anti-Semitism, and that later, after his bout with cancer, he explored his Jewish roots more deeply and engaged in new ways with the “richness of Jewish life”—an experience that shaped his decision to create a foundation focused on this area.

Instead of solely funding existing programs, Grinspoon became keen as a philanthropist to develop and design new solutions directly—and to bring other funders along early on. His belief in hands-on giving and partnerships to leverage his investments have become cornerstones of his foundation’s programs.

This approach can be seen in PJ Library, an initiative Greenspoon started when was already 76. The world’s largest engagement program for Jewish children and their families, PJ Library is one of three major flagship programs of the Harold Grinspoon Foundation besides JCamp180 and the Life and Legacy program.

Grinspoon credits Dolly Parton and his daughter-in-law Winnie Sandler Grinspoon, who succeeded him in 2014 as HGF president, with giving him the inspiration to develop the PJ Library. Soon after his encounter with Dolly Parton’s literacy program, Imagination Library, Grinspoon had the idea of adapting the concept for the Jewish community by sending free books with Jewish content to children raised in Jewish families. The concept of PJ Library was born, and a pilot program started in Western Massachusetts in 2005.

For Harold Grinspoon, creating an engagement program for the next generation of Jewish children through Jewish bedtime stories was born out of his own secular Jewish upbringing and desire to explore his Jewish roots. Growing up in the 1930s and 1940s, he knew very little about what it meant to be Jewish. Jewish education was not part of his upbringing, yet anti-semitism all too frequently reminded him of his heritage. The spiritual void of his childhood and his later deep connection to Judaism helped him to see the need to make it fun and easy for children to learn about Jewish history, traditions and values.

Fast-forward to 2019, and the PJ Library program is active around the world, and shares free, high-quality Jewish children’s books in English, Hebrew, Spanish and Russian with hundreds of thousands of Jewish children and their families in 13 countries, including the U.S., Canada, Israel, U.K., Russia, Australia and many countries in Latin America. In addition, regional programming by local organizational partners provides a direct invitation to families seeking to strengthen bonds with their community and their peers.

By building and expanding PJ Library, the Harold Grinspoon Foundation has become one of the world’s largest distributors of Jewish children’s books and a creative platform for emerging and established children’s book authors and illustrators.

The foundation didn’t grow the PJ Library into a global initiative by itself. From the very beginning, it has worked in partnership with local communities and funders. Grinspoon and Troderman brought the project to a national level by inspiring other high-net-worth Jewish donors to join as PJ Library Alliance Partners. Having the buy-in and commitment of fellow major local and national funders has been essential for HGF.

The PJ Library Alliance is an example of a growing trend that’s seen the emergence of more organizations and programs aiming to engage younger generations of Jews. While these efforts are often anchored by the support of a major philanthropist, they only fully take flight when they achieve buy-in from a broader community of Jewish funders.

At age 90, Harold Grinspoon, who is also a sculptor, has no intention of retiring. While his daughter-in-law now oversees the foundation’s day-to-day operations, Grinspoon remains actively involved in an institution that has a lot going on—and which is also getting bigger, thanks to major infusions of wealth in recent years, which brought its assets up over a half-billion dollars by the end of 2016.