First ever conference of Jewish learning in Azerbaijan 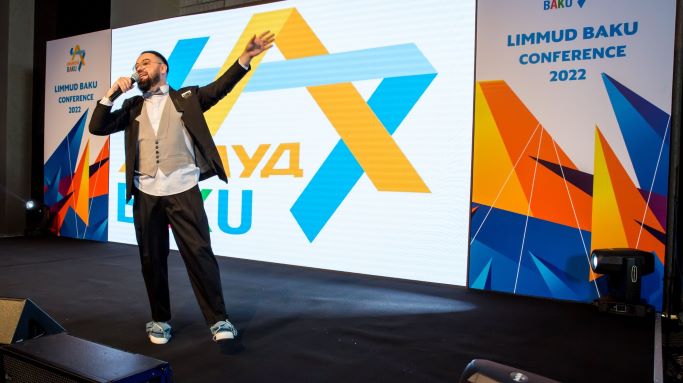 The first-ever conference of Jewish learning in the Azerbaijan capital of Baku attracted roughly 300 people on September 11.

The Limmud event offered over 15 sessions for adults including a discussion of the state of antisemitism in the past and present and what needs to be done to combat the problem, the significance of yiddish, and master classes in candle making. There was separate programming for the attracted 60 youth, between the ages of 6 and 15, who were separated into three age groups. The younger groups focused on arts and crafts and quizzes on Jewish themes, while the older age group discussed important topics, such as Tikkun Olam. The entertainment at the conference was met with great excitement as musicians from Israel performed with musicians from their own Jewish communities.

“I have been coming to Azerbaijan for business for over 30 years, and very early on I learned that it is a uniquely tolerant country that loves its people,” said president of Limmud FSU Aaron G. Frenkel. “It is our very first event here, and it will certainly not be our last.”

However, this event wouldn't have been possible without the help of volunteers, as expressed by Limmud FSU co-founder Sandy Cahn. “We have found this a particularly inspiring event. The energy of the organizing committee and volunteers has been palpable, and we are especially inspired by the age of the volunteers – most are in their early 20s,” said Cahn.

Marc Schneier, a leader in promoting ethnic and religious tolerance, gave a session about the special role Azerbaijan has in encouraging the development in the relations between Muslim countries and Israel, as well as the Jewish world. “There are 57 Muslim countries across the globe, and Azerbaijan, and the country’s president, are a role model for other Muslim countries where relations with Israel are concerned, and where respect for the local Jewish community is concerned. Azerbaijan is the foremost example in the Muslim world of inter-community relations, tolerance and coexistence,” said Schneier.

Also emphasizing this fundamental idea is Arthur Lenk, Israel’s former ambassador to Azerbaijan, in his session. Based on the educational approach of the ORT network of schools in Israel, Lenk is working to help the Azerbaijan Education Ministry implement the STEAM education model. “In the early years after the creation of Azerbaijan as an independent country following the break-up of the Soviet Union, the nature of the multiple areas of interface with Israel was always kept quiet,” said Lenk. “Now there is an identification between Azerbaijanis and Israelis that has led the government to understand that the ORT model can be replicated in Azerbaijan. It in turn will lead to Azerbaijan presenting Israel as a center for expertise in education.”

Limmud FSU events have reached roughly 80,000 Russian-speaking Jews around the world since its first conference 16 years ago. “This event is an important part of the deepening cooperation between the World Zionist Organization and Limmud FSU for building strong community Resilience,” explained Head of the WZO’s Department for Combating Antisemitism & Enhancing Resilience Raheli Baratz-Rix. “Together we are effectively reaching out with Jewish education to Russian-speaking communities.”