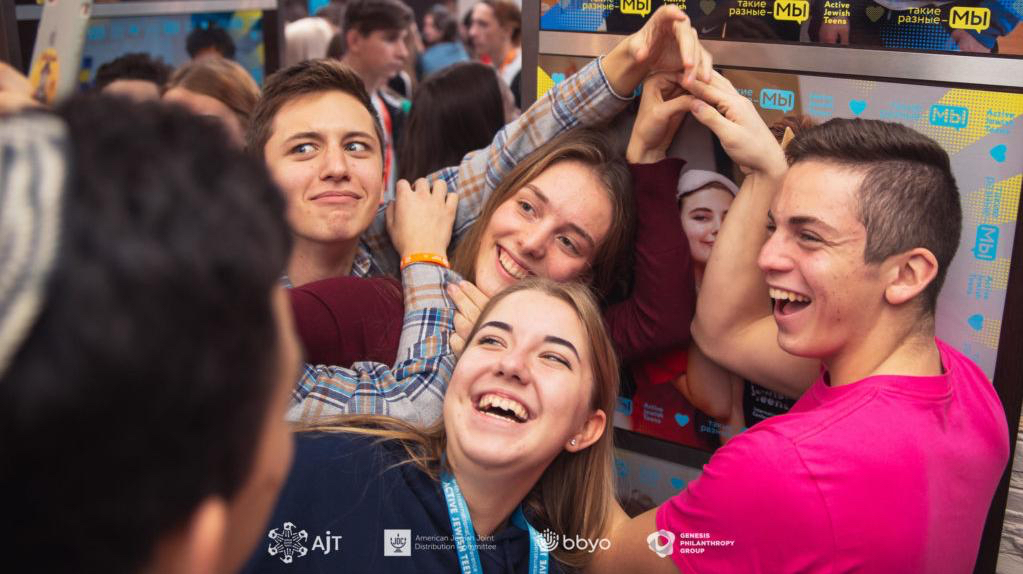 More than 400 Jewish teens from around the world gathered this past weekend for...

JDC’s 6th annual Active Jewish Teens (AJT) Conference in Kiev. A bar and bat mitzvah ceremony for five teens, a conference first, will serve as a model of commitment to Judaism, leadership and taking action in communities, for Jews of all ages in the region.

The gathering, created and run by AJT teens, draws participants from across the former Soviet Union including Ukraine, Russia, Belarus, Georgia, Moldova, Kazakhstan, and Kyrgyzstan. The theme – the Jewish experience in communities around the world – will be examined in more than 150 workshops.

AJT, the region’s largest Jewish teen network, is powered by a partnership with Genesis Philanthropy Group (GPG), among other generous philanthropists, and an ongoing partnership with BBYO, with participants from the USA, Latvia, Lithuania, Estonia, Austria, Israel, and Germany joining the conference as well. AJT connects 3,200 Jewish teens through local chapters in 60 cities across the former Soviet Union.

“In much of the rest of the world, a b’nai mitzvot marks the entrance of young people into adulthood and the obligations of Jewish community life. But for AJT teens, this sense of responsibility and identity are already on the fast track. They are the emerging leaders of the post-Soviet Jewish space, engaging their friends, parents, grandparents, and wider communities in peer-to-peer Jewish learning, volunteerism, and the need for shared responsibility,” said Michal Frank, director for JDC’s former Soviet Union operation. “Their enthusiasm is key to building not just the future of Jewish life in this part of the world, but globally as they build bridges to other Jews the world over.”

“My hope is that when I stand up there in front of my peers for my bar mitzvah, I serve as an inspiration for what is possible when you embrace Jewish values and commit to community. I was a teenager when I first found out I was Jewish. From that moment, my life was completely changed, and today, six years later, I am a proud Jew, doing what I love – working to make my community better every day. As I continue to learn and grow as a Jew, working towards my bar mitzvah has been an invaluable experience,” explained Ilia Buzunov, one of the bnai mitzvah participants from Kiev who works with Jewish youth at the Halom JCC, one of JDC’s community centers in the former Soviet Union.

Participants will hear from AJT teachers and inspiring speakers, including a proudly Jewish para-Olympic champion from Ukraine, as well as graduates of JDC’s Metusda young leadership program, directors of youth clubs, and well-known local educators, to deepen their Jewish knowledge. The conference will also feature a project fair where teens will present their grassroots initiatives.

AJT is JDC’s flourishing peer youth network which grew out of a confluence of enthusiastic grassroots efforts to build connectivity between young Jews in the region. Through activities both on a local and regional level, AJT is nurturing Jewish identity, community engagement, and leadership among Jewish youth to strengthen them as they lead the next generation in their local communities.