Finding Community, and Each Other, at AJT FreeDom 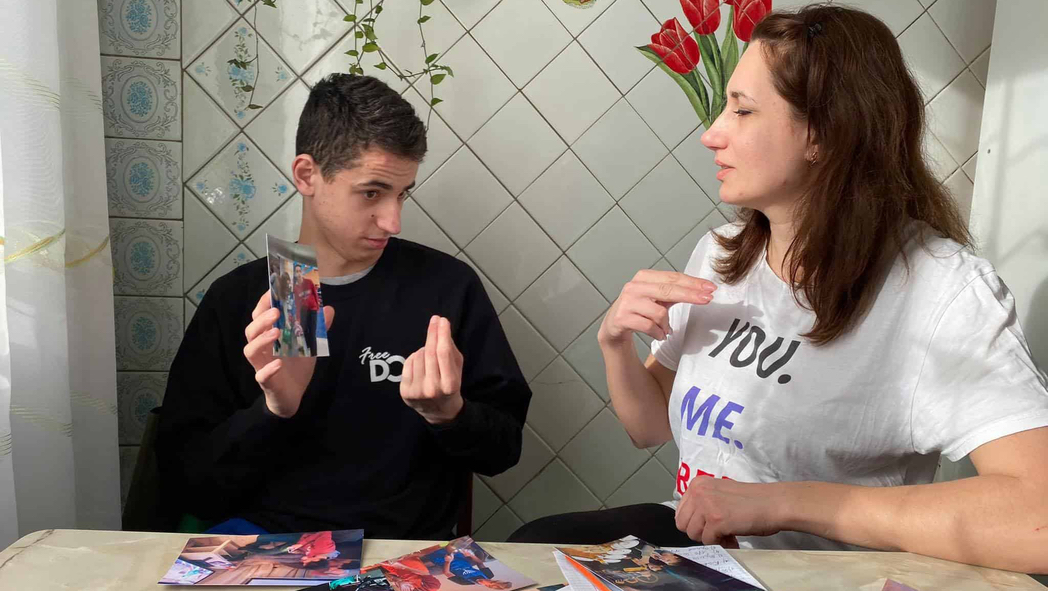 As a deaf 14-year-old living in post-Soviet society, David Novak faced many challenges fitting in...

especially given stigmas around people with disabilities.

That was until he and his mother moved to Kharkiv, Ukraine, where they were quickly embraced by the local Jewish community and David joined AJT FreeDom, a pilot program aimed at breaking down stereotypes and integrating Jewish teens with special needs into Active Jewish Teens (AJT), JDC’s youth network reaching more than 3,200 teens in 63 cities across the former Soviet Union. Launched in 2018, FreeDom — “Dom,” meaning home in Russian — is opening new frontiers for AJT, which is powered by a founding partnership with BBYO and a partnership with Genesis Philanthropy Group and other supporters.

Suddenly I stopped being ‘David with a disability.’ I became ‘David,’ part of the group. I made friends who became like a second family.

And he is not alone. First piloted in Chisinau, Moldova, and Kharkiv, the program is modeled on the work of Krembo Wings, the leading Israeli organization for social integration of children and teens with special needs. AJT FreeDom’s success has led to its expansion to Kyiv, Odessa, and Zaporizhia, with dozens of teens across Moldova and Ukraine now working to build connections and community.

In the former Soviet Union, special needs teens are primarily clients of JDC-supported Jewish Family Service (JFS) centers, which provide the program with professional guidance and expertise. In addition, psychologists are employed to help the staff and volunteers with the special sensitivities involved in running this program. With AJT FreeDom, these children and teens are given the opportunity to join their fellow AJT counterparts in activities and events all year round.

As the world has needed to adjust to a new pandemic reality, AJT FreeDom has done the same. It has moved programming online to ensure that connections built continue even during these unprecedented times. This includes this year’s Passover festivities where participants got to partake in a variety of virtual classes.

At the JDC-supported Mazal Tov JCC in Zaporozhia, Ukraine, AJT FreeDom participants were treated to a special virtual Passover class. Taught by Ksenia Krokhmal, a 16-year-old volunteer, participants were taught the story and traditions behind the holiday, and then learned how to make paper frogs in honor of the ten plagues. Those who were unable to attend received a video recording of the class.

11-year-old Maxim, who suffers from heart disease and has been attending AJT FreeDom events for the last two years, loved the program: “The activity was SUPER! It was an interesting and creative workshop.”

Programs like these are often just as inspiring for volunteers running them. Ksenia, who whowas introduced to AJT FreeDom after spending several years as  an active member of AJT through her local “JeWorld” teen club,was interested in FreeDom because of her own personal connection to the cause. Her mother, Elena, has a disability as well — suddenly losing her leg in 2010 to a progressive disease.

That’s why she is grateful for the connections she’s made and the opportunity to build on her personal experience by sharing her love of crafts and creativity with children with disabilities. While she admits it is not always easy to conduct classes virtually, Ksenia is passionate about the work that she is doing and wants people to embrace the opportunity to connect with people with special needs.

“It’s important to understand that even though we may have some differences, if we have enough understanding, kindness and desire, we will definitely find a common language and can support and share with each other” she said.

For those like David and Maxim, AJT FreeDom is a place where that common language is spoken. It’s also a place where, thanks to volunteers like Ksenia, they can create new bonds and become a part of a larger Jewish community.