Educating the next generation about the Holocaust in the former USSR 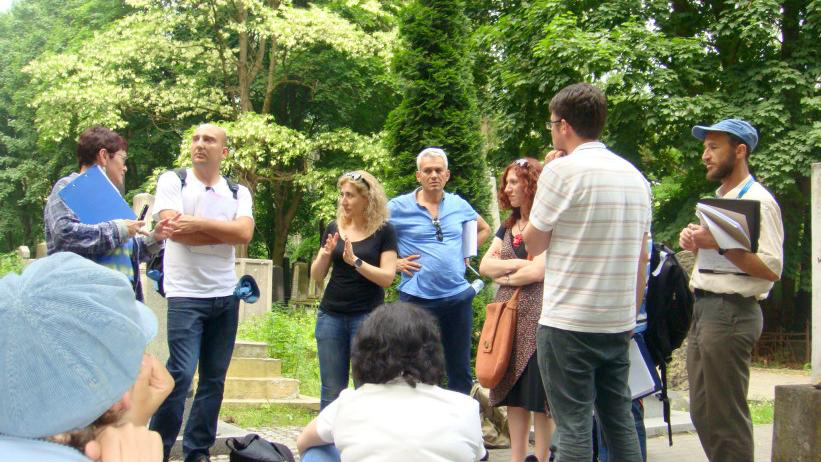 While most people are familiar with the figure of six million Jews murdered in the Holocaust, many are not aware that more than one third of that number were Soviet citizens...

who lived in the occupied Soviet territories following the German invasion during the early summer of 1941. Many were killed as the Nazis passed through towns and cities as part of their occupation of Soviet territory, which began in June 1941.

An innovative partnership between Yad Vashem and the Genesis Philanthropy Group is educating both the Hebrew-speaking Israeli public, as well as Russian-speaking Jews in Israel and around the world to provide greater awareness, understanding and knowledge about the fate of the Russian Jews under Nazi occupation.

Masha Pollak-Rosenberg, director of the Educational Guiding Department and director of the Genesis educational program at Yad Vashem’s International School for Holocaust Studies, says that until the end of the Cold War and the fall of the Soviet Union in 1991, many were not aware of the effects of the Holocaust in Soviet territories during World War II. Throughout the years of Communist rule, Soviet historians and officials had largely ignored and suppressed discussion of the Holocaust. Moreover, among the 2.5 million Jews that came under German rule in 1941, more than 98% were murdered, leaving relatively few survivors behind to tell the story of what had happened.
“As a result,” she explains, “the average Israeli thinks that since he hasn’t met Holocaust survivors from the USSR, the Holocaust did not occur there.”

While Russian-speaking Jews living in Israel and around the world are generally aware of what happened to the Soviet Jews while under German occupation, they were unable to speak of it freely during the years of Communist rule, due to official Soviet governmental efforts to silence discussion.

“While we do not need to tell them their history, we can improve and increase their awareness,” says Pollak-Rosenberg. Genesis Philanthropy Group, which enhances Jewish identity among Russian-speaking Jews worldwide, and strengthens ties between Jews living in Israel and throughout the Diaspora, is supporting several educational initiatives developed by Yad Vashem to increase awareness of the Holocaust in the USSR among these two groups. The first joint project that has been developed is a video series in which survivors of the Holocaust in the USSR from areas such as Ukraine, Belarus and Lithuania tell of their experiences before, during and after the Holocaust. These 45-minute films, which are available on Yad Vashem’s YouTube channels and which are shown to groups and seminars, are created with subtitles in English or Hebrew. The accounts of the survivors, together with archival footage and photos, bring a sense of immediacy and realism to the events from the past century.

In one video, Sergei Sushon, born in Odessa in 1928, tells of his family’s deportation to the city’s ghetto after the Romanian troops occupied the city. In the summer of 1942, Sergei, along with his mother, grandmother and younger brother, were transferred to the Domanivka, Akhmetchetka and Bogdanovka camps in Transnistria, approximately 160 kilometers northeast of Odessa, and there they served as forced laborers on an agricultural farm. In 1944, as the Red Army approached, the Sushon family fled to the village of Viktorovka, where they hid until liberation. After the war, members of the family returned to Odessa and restored their lives there. Over the years, Sergei Sushon worked to commemorate the events of the Holocaust. Later, he immigrated to Israel, settled in Hadera and continued to work for the preservation of the memory of the Holocaust among both Jews and non-Jews.

YAD VASHEM has also created an educational mobile exhibition about the rescue of Jews living in the USSR during the Holocaust. Created in both Russian and Ukrainian, it features pictures, survivor testimonies, and historical texts that provide the background of those difficult times. The educational exhibit is also available for download via the Internet and was designed for both Jewish and non-Jewish groups. Pollak-Rosenberg reports that the exhibit is used in informal educational settings in Russia, Ukraine, Estonia, Latvia, Lithuania and Belarus.

“In the USSR, there were more than five million Jews at the beginning of the war. Two-and-a-half million Jews were killed or murdered, while the rest survived. The question that we ask is, ‘How did those Jews survive and what were the dilemmas that they faced in order to do so?’”

Pollak-Rosenberg notes that the mobile exhibit is also used with Russian Jewish students in the Na’aleh program, which brings high school students from the former Soviet Union and other countries to complete their high school education in Israel. In addition, Yad Vashem has created a two-year program that focuses on identity and Israeli identity for 10th and 11th grade students in Na’aleh. The students engage in research about the Jewish world and the Holocaust in the USSR, and using the testimonial video series, as well as the mobile exhibit about the rescue of the Jews in the USSR during that time, gain a greater understanding of the Holocaust there.

“The high point of the experience for Na’aleh youth is when they visit Yad Vashem,” says Pollak-Rosenberg. “Over the years, we have experienced that students coming from Kiev, or Minsk, or Lviv, are looking to see how they are connected to the events, to their Jewish roots and to their larger family.”

She adds that many students who initially felt that the events of the Holocaust did not relate to them, come to understand that they are in fact connected, by virtue of their grandparents, who may have served in the Red Army, or other relatives that may have somehow survived, or escaped to the east during Nazi rule.

“For them, the experience of visiting Yad Vashem and learning about their past can be the anchor that connects them to Israeli society.”

Pollak-Rosenberg adds that Yad Vashem also works extensively with Na’aleh educational staff to provide them with a greater understanding of Jewish-Russian identity, especially as expressed in the events of the Holocaust in the FSU, which helps them better relate to their students.

Genesis Philanthropy Group also provides funding to Yad Vashem for training participants from the FSU in Masa, the immersive study and internship program for young adults in Israel. These are among the tailor-made study programs Yad Vashem provides for its seminar participants.

Yad Vashem and Genesis have also partnered in a special seminar offered to ninth-grade Israeli students who hail from Israeli cities that contain a large population from the USSR, such as Ashkelon and Ashdod. These students, having grown up in Israel, are less likely to be aware of the Holocaust of Soviet Jewry and its effect on their lives.

Newly arrived young immigrants, ages 35 to 50 from the former Soviet Union come to Yad Vashem for a special one-day seminar in which they learn about the Holocaust in the FSU. Participants take part in a special in-depth guided tour in the Holocaust History Museum where they focus on the story of the Holocaust in Russia, watch a film and historical presentation, learn about how the Holocaust is commemorated in Israeli society, and are taught about the “Righteous Among the Nations,” non-Jews who risked their lives to rescue Jews.

Over the past year, more than 900 of these new immigrants from Jerusalem, Sderot, Beersheba and other cities have taken part in this important program that teaches them that they represent an inseparable part of Jewish and Israeli history, and are part of one nation, the Jewish people. A young couple from Odessa, who had arrived in Israel just a week earlier, attended the seminar and remarked, “The seminar was an eye-opening experience, we learned things that we had never known before,” recalled Tanya Manusova, adviser to the Yad Vashem director general and in charge of GPG programs at Yad Vashem.

Recently, Yad Vashem has begun training its museum guides on the events and history of the Holocaust in the USSR.
“Together with the Genesis Philanthropy Group,” says Pollak-Rosenberg, “we asked ourselves, ‘How can we combine the story of the Jews in the USSR within the narrative of teaching about the Holocaust?’”

Most of the guides who work at Yad Vashem have gone through the Israeli school system, and for them, the Holocaust is thought of as events that took place mostly in Poland and Western Europe.

“We considered how we could strengthen their awareness and give them a greater understanding as to what happened, so that it would become part of their educational focus.”

Yad Vashem has designed a special two-part course for its guides, consisting of educational seminars at the Yad Vashem campus, combined with a trip to Belarus and Lithuania, where they visit and learn about the Soviet Jewish world that existed before the Holocaust, as well as the events that occurred during those years.

“The idea,” says Pollak-Rosenberg, is to make the story of the Jewish Holocaust in the USSR known to all.” Yad Vashem offers online courses on the Holocaust in Russian and Hebrew for both Israelis as well as Russian speakers – mostly non-Jewish – in Russia, and other countries. In addition, special conferences are held at Yad Vashem, with the support of the Genesis Philanthropy Group, for non-Jewish educators from Latvia, Lithuania, Estonia, Moldova and Russia. This year, Yad Vashem also held a four-day conference in Vilna for 50 graduates of its educational programs who live in countries that were formerly part of the Soviet Union.

“Holocaust remembrance and Holocaust education hold particular significance for the Genesis Philanthropy Group,” said Ilia Salita, president and CEO of the Genesis Philanthropy Group. “Through education, access and remembrance of the history of the Holocaust in the former Soviet Union, we seek to enable Russian-speaking Jews, especially new generations, to meaningfully engage with their own Jewish narrative – and what is equally important, to connect intellectually and emotionally to the history and the memory of the Holocaust as it is viewed by their fellow Jews in Israel and the Diaspora.”

The joint educational efforts of Yad Vashem and the Genesis Philanthropy Group to promote greater awareness of the Holocaust in the former Soviet Union have reached tens of thousands of people via the Internet, seminars, videos, classes and educational traveling exhibitions. This fruitful partnership has led to greater awareness about the events of the Holocaust in the USSR among Russian speakers, both in Israel and around the world.