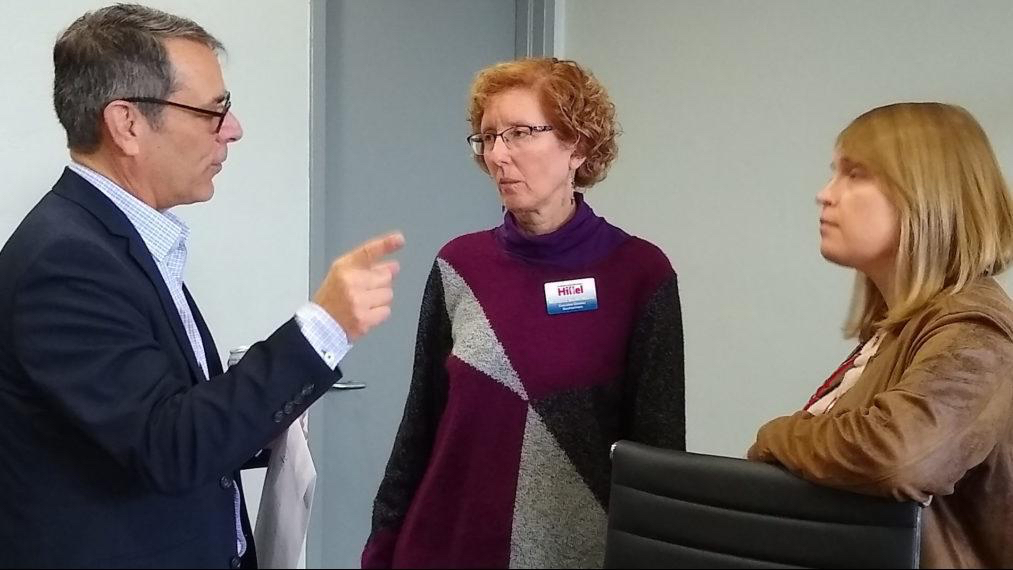 Sandy Cardin, who recently stepped down after 25 years as president of the Charles and Lynn Schusterman Family Foundation...

where he remains a senior advisor, visited Tucson Dec. 3 to speak at the Jewish Federation of Southern Arizona’s lead gifts dinner. Earlier that day, at a lunch meeting at the Tucson Jewish Community Center with more than a dozen representatives of JFSA and Tucson’s Jewish agencies, he discussed challenges and opportunities in the Jewish community, as well as his new role as CEO of Our Common Destiny, a global initiative founded by the Genesis Philanthropy Group and the State of Israel to strengthen bonds among Jews worldwide.

The Schusterman foundation is based in Tulsa, Oklahoma, and Cardin thinks smaller Jewish communities like Tulsa and Tucson are making a mistake if they try to mimic what larger communities such as Detroit, Cleveland, or Baltimore do.

“When you think about looking forward, what’s Jewish communal life going to look like, you’ve got what you need here,” he said, explaining that those who work in the community know what Jewish individuals and families in Tucson want.

In Tulsa, he sometimes floated radical ideas. One he regrets never getting the chance to implement was to merge Tulsa’s small, struggling Jewish day school with the city’s equally small Muslim school, with secular education in the mornings and religious education in the afternoons. Although Charles Schusterman thought the idea was crazy, Cardin believes it would have made a huge statement, showing Jews and Muslims can get along.

“Those of us who think the Jewish family is two Jewish parents and a couple of Jewish kids — it’s not true. That family is the exception today,” outside of the Orthodox community, he said. “The Jewish community is intermarried, inter-partnered, and their children have parents with at least two different faiths, if they have a faith at all.

“That’s the reality,” he said, yet most Jewish communal agencies still communicate with their constituents using language that doesn’t acknowledge this fact.

“How do we make sure that the things we say are inclusive of the partners and the children of the people we say we know are Jews — however we know that — how do we do that?” he asked, admitting that he doesn’t have all the answers.

“There’s no reason that Tucson can’t be the leader in that field, and that leadership is something that will be needed everywhere, in every Jewish community, no matter how small and no matter how large.  I beg you to think about how to deal with this issue,” he said, because the larger cities, which still can count on a core of old-school major donors, are not leading the way.

Aviva Zeltzer-Zubida, JFSA vice president for planning and community engagement, noted that at the recent Jewish Federations of North America conference, FedLab, there was discussion about how to also be inclusive of Jews of color and diverse sexual orientations — that the traditional Jewish family of two white, straight parents can no longer be assumed. “The challenge is huge, if we want to be relevant to the way Jewish communities look today,” she said.

Following a discussion of leveraging resources in the Jewish and broader communities, Todd Rockoff, president and CEO of the Tucson J commented, “The question that’s always asked is, ‘How Jewish is the JCC?’ And the answer to that is always 100%. You want to talk about demographics, they’re irrelevant. Who we are and what we do is based on a set of values that is welcoming to the entire community, and that is set up to include everybody. And when that experience includes everybody, I really believe you answer the question of who’s welcome because the tent is as large as you need it to be,” leading to positive outcomes for the Jewish community and the broader community.

Discussing his work with Our Common Destiny, Cardin explained that in its first dozen or so years, Genesis Philanthropy Group focused on working with Russian-speaking Jews and strengthening their Jewish identity, wherever they lived. (The Genesis Prize, although it comes under the GPG umbrella, is a separate enterprise, Cardin said.)

A few years back, GPG leaders became concerned about the growing rift between Jews in Israel and in the Diaspora, he said, and sought to create a platform where the voice of every Jew can be heard in matters relating to the Jewish people. They began to look at “what unites us, what are our shared values, what are our shared principles — indeed, how do we shape a common destiny.”

A global group of Jewish scholars, from progressive to haredi (ultra-Orthodox), drafted and commented on a declaration, which can be read at www.ourcommondestiny.org. Cardin outlined its six principles: the safety and security of Israel and the Jewish people wherever they live, mutual responsibility for each other, strengthening the Jewish identity of every Jew, serving as a light unto the nations, encouraging people to live moral and ethical lives, and contributing to the world through science, technology, and other innovations.

In September, the declaration was presented to Israeli President Reuven Rivlin, who challenged the group to crowdsource it. The next step is to get people to vote on the priority of the principles, and to answer, for each principle, this question: We will have fulfilled our commitment to this principle when the following is true.

The top answers in each category will be added to the document, which was deliberately left incomplete. Our Common Destiny is currently seeking a project manager to implement the crowdsourcing, Cardin said, with an ultimate goal of getting 500,000 people to interact in a simple way with the document — something akin to “liking” it — with 50,000 “wrestling with the document” by ranking the priorities and answering the questions.